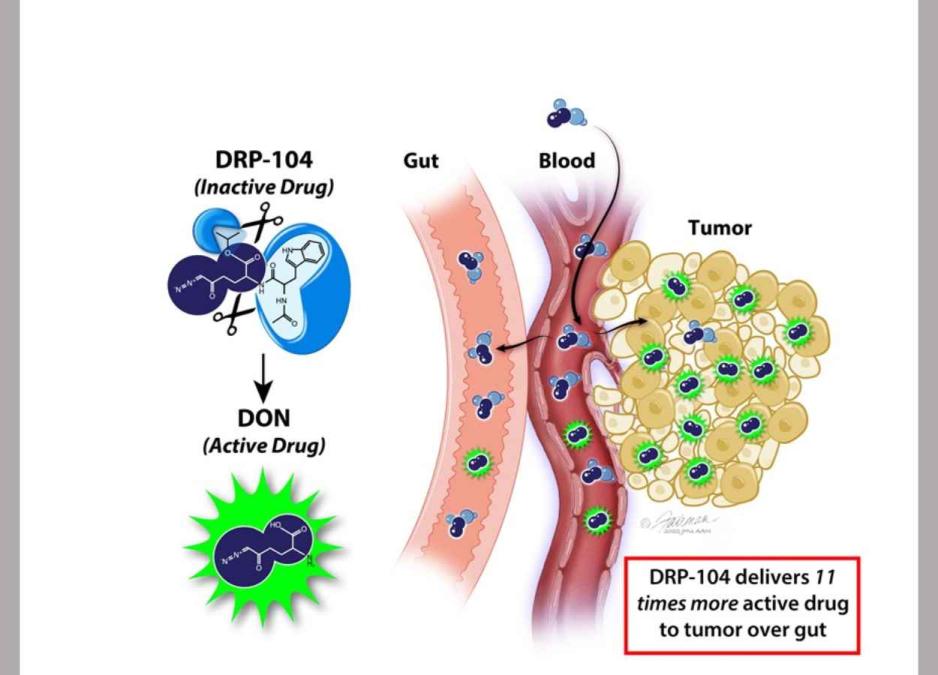 Johns Hopkins Medicine researchers have revamped an anti-cancer drug to better target cancer cells and leave healthy tissues unharmed. Scientists have dubbed this type of targeted approach a “prodrug” — a medicine designed to release its payload in a particular area of the body and in no other areas. The Johns Hopkins-discovered prodrug, called DRP-104 (sirpiglenastat), is in early-stage clinical trials in people with advanced solid tumors. The newly published studies in mice show that the augmented drug preferentially eliminates cancer cells but does not harm healthy cells.

“Our goal was to modify an old cancer drug that had shown robust efficacy but was too toxic, especially to the gut, to be developed clinically. To do this, we used a prodrug approach. What is unique about our approach is that we utilized a novel chemistry design to create a prodrug that was simultaneously bio-activated in cancer cells but bio-inactivated in healthy tissues such as the gut. This preferential targeting of the payload to cancer cells is now enabling this efficacious class of drugs to be reevaluated safely in people,” says study author Barbara Slusher, Ph.D., M.A.S., director of the Johns Hopkins Drug Discovery Program and professor of neurology, pharmacology and molecular sciences, psychiatry, neuroscience, medicine and oncology at the Johns Hopkins University School of Medicine.

The newly modified prodrug takes advantage of a common property of cancer cells: a voracious appetite for an amino acid called glutamine, which is a critical building block for proteins, lipids and nucleotides, as well as for energy formation. Rapidly growing cancer cells use a tremendous amount of glutamine, a phenomenon called “glutamine addiction,” but other healthy cells with rapid turnover, like those lining the gut, also rely on glutamine.

Co-author Rana Rais, Ph.D., an associate professor of neurology and pharmacology, says, “DRP-104 is a tumor-targeted prodrug of the glutamine mimic drug called DON (6-Diazo-5-Oxo-L-norleucine), which inhibits multiple glutamine-utilizing enzymes in cancer cells. Many early studies of DON showed it was robustly efficacious in people and mice, but its development was halted due to its toxicity to normal tissues, especially the gut.”

Development of this promising class of drugs did not resume until Slusher, Rais and team decided to make chemical modifications to DON.
“We added chemical groups, called promoieties, to DON that rendered it inactive in the body until it reached the tumor, where the promoieties were clipped off by enzymes that are abundant in the tumor but not in the gut,” says Slusher, who is a member of the Johns Hopkins Kimmel Cancer Center and its Bloomberg~Kimmel Institute for Cancer Immunotherapy. “This specific prodrug design made DON targeted to its intended destination (tumor) and have less of an impact on healthy cells elsewhere.”

For the new study, researchers gave the original DON drug and the souped-up DRP-104 drug to mice implanted with tumors. In mice that received DRP-104, the researchers found 11 times more active drug in the tumor compared with the gastrointestinal tract (gut). Both drugs completely wiped out the tumor, but DON caused more gut toxicity in the mice than DRP-104.

Slusher and study co-authors Rana Rais, Pavel Majer and Jonathan Powell co-founded a biotechnology company, Dracen Pharmaceuticals Inc, which licensed this new prodrug for clinical development. DRP-104 is in phase I/II clinical trials at sites across the U.S., including the Johns Hopkins Kimmel Cancer Center, for people with advanced-stage solid tumors. Slusher says her Johns Hopkins Drug Discovery lab is also actively looking for other drugs that have failed clinical trials because of toxicity problems. They hope to apply this same prodrug design to medicines for other conditions.

Schematic showing DRP-104’s bio-activation to DON in tumor and bio-inactivation to an inert metabolite in GI tissues.
Credit: Jennifer E. Fairman, CMI, FAMI, Department of Art as Applied to Medicine