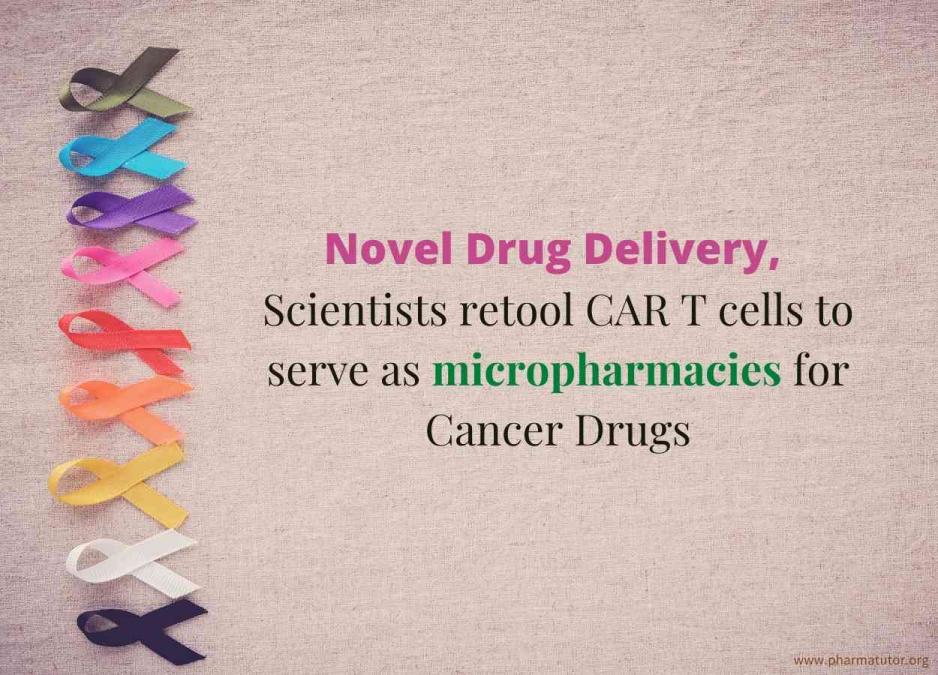 Standard-issue CAR T cells are designed in the lab to recognize specific markers on cancer cells. When these CAR T cells are given back to a patient, they proliferate and go on the attack, acting as a kind of living drug.

Despite their usefulness for treating blood cancers, there are several limitations of current CAR T models. One is that the CAR T cells can only kill cancer cells that contain the marker they are designed to recognize. But it is not uncommon for cancer cells to stop making this marker and thus to “escape” from the therapy.

A second problem is that CAR T cells can become “exhausted” - and even inhibited by the cancer cells themselves. Lastly, existing CAR T cells work well only against blood cancers that the CAR T cells can easily reach. Against dense solid tumors in the lung or breast, they are mostly powerless.

To overcome these hurdles, a team of SKI researchers has designed an entirely new type of CAR T cell that acts as a “micropharmacy”: It can deliver a toxic drug payload directly to a tumor, killing both tumor cells that contain the cancer marker as well as those cancer cells nearby that do not. What’s more, the engineered cells can produce the drug even after they become exhausted, and the drug is not suppressed by the cancer.

“We call them SEAKER cells,” says physician-scientist David A. Scheinberg, Chair of the Molecular Pharmacology Program in SKI who also directs the Center for Experimental Therapeutics. “SEAKER stands for Synthetic Enzyme-Armed KillER cells. These cells combine the target-seeking power of immune cells with the ability to locally generate a potent anticancer drug for double effect.”

The cancer-fighting molecule is one that SKI Chemical Biology Program Chair Derek Tan - Dr. Scheinberg’s collaborator on the project - discovered previously while developing antibiotics. The molecule, called AMS, is so powerful that it cannot be injected directly into an animal’s bloodstream. But when it is produced locally just at the site of a tumor, it is effective at safely killing cancer cells in mice. The scientists have not yet tested the technology in people.

Details about the SEAKER platform, which the scientists say has applicability to both cancer and other diseases, were published on December 30, 2021, in Nature Chemical Biology.

A Unique Drug-Delivery Approach
The idea of using CAR T cells to deliver additional therapeutic agents isn’t brand new. Several research groups have shown it’s possible to get them to make immune proteins like antibodies and cytokines. But getting CAR T cells to produce a small-molecule cancer drug is a trickier prospect.

To find a work-around, the team devised a clever approach. They linked the cancer drug to another chemical that “masks” its function. Then, they genetically engineered the T cells to make an enzyme that cuts the masking molecule from the drug.

“In contrast to small-molecule drugs, human cells are very good at making enzymes, so CAR T cells are able to produce it effectively,” Dr. Tan adds.

When the inactive version of the drug, called a prodrug, is injected into the bloodstream, it circulates through the body. The enzyme produced by the CAR T cells acts like a scissor, releasing the active part of the prodrug at the site of the tumor.

The scientists tested their SEAKER cells on both cancer cells growing in a dish and in mouse models. In both cases, the SEAKER cells performed better than regular CAR T cells at killing the cancer cells.

A Risky Bet That Paid Off
The scientists emphasize the “high risk, high reward” nature of their research.

“It’s one of the wildest ideas I’ve ever worked on,” Dr. Tan says. “It’s very exciting that we got it to work.”

Thanks to seed funding from MSK’s Center for Experimental Therapeutics and philanthropy, they were able to take a risk and eventually get the idea off the ground. Later, the National Institutes of Health (NIH) provided additional funding.

Dr. Tan adds that this project is a good example of how the pursuit of noncancer-related basic science at MSK can spawn new discoveries with relevance to cancer.

SEAKING Out Cancer and Other Diseases
Now that the scientists have shown that their SEAKER cells work in mice, there has been a lot of interest in the approach. In fact, a company called CoImmune has already licensed the technology from MSK to develop the CAR T cell technology for human trials.

“There is an opportunity to better understand the limitations of CAR T cells and specifically engineer new treatment options that have the potential to address challenges with eliminating tumor masses and toxicity,” says Charles Nicolette, PhD, chief executive officer of CoImmune. “This exciting collaboration positions us to evaluate this completely novel approach that may provide a new treatment option for patients with solid tumors.”

“The collaboration with CoImmune is exciting because we need a company to take this on to scale up and manufacture a standardized product,” Dr. Scheinberg adds.

Another part of the appeal of the SEAKER technology is that it has more than one possible application.

“You could imagine it being used to produce drugs to fight other conditions, such as autoimmune diseases and infections,” Dr. Scheinberg says.

But for now, the focus of the MSK researchers and CoImmune will be on cancer. Dr. Scheinberg speculates that a clinical trial in cancer is about two to three years away.