About 10% of bone implants lead to failure due to post-surgical bacterial infections. To overcome this hurdle, often heavy dosage of medicines are injected or given orally 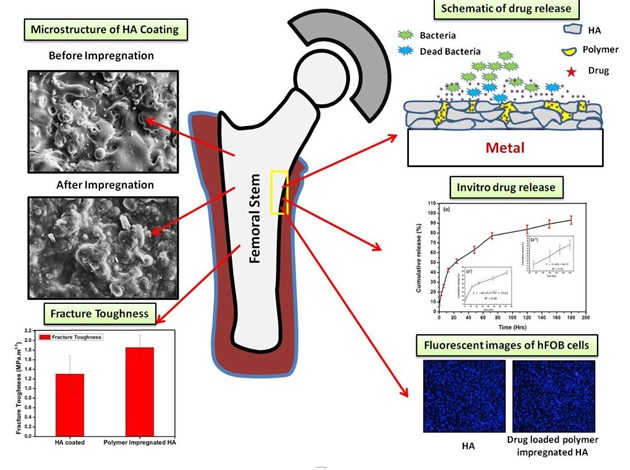 A team of researchers from India and the US has now come up with a method to localise the drug delivery to surgery site.

This has been achieved by modifying the surface of metallic implants by loading them with an antibacterial drug which gets released gradually over a period of one week at the implant site to prevent infections.

“Our surface-modified implant addresses localised and long term drug release for areas that are prone to post-surgical infection that often arise during a joint replacement procedure. The modified implant surface serves for both drug delivery and bone integration,” said Dr Debrupa Lahiri, lead researcher at the Indian Institute of Technology, Roorkee, while speaking to India Science Wire

The medicine was embedded into a micro-layer of hydroxyapatite which is a biocompatible porous material with a bone-like mineral composition and is used in ceramic implants. The pores anchored the drug while the structure facilitated the bridging of the bone and the implant

By using the plasma spray technique, a 200-micron thick layer of hydroxyapatite was coated on a titanium metal alloy sheet. A commonly used drug, gentamicin, was mixed with a biodegradable polymer called chitosan. Then the drug-loaded polymer solution was impregnated into the pores of hydroxyapatite coating, under vacuum.

At the implant site, chitosan degrades naturally under the influence of body fluids, thereby releasing the loaded drug. The drug forms a protective layer to arrest bacterial growth.

The team found that the polymer-Hydroxyapatite combination had an added benefit: it improved the fracture toughness of the implant surface by 42%.

Laboratory tests demonstrated that the surface-modified implant material exhibited good antibacterial action against S. aureus, a common bacterium usually responsible for most of implant-related infections. Tests on human osteoblast cells revealed that the Hydroxyapatite supported the bridging of the regenerating bone and implant.

The technique indicates better control over the drug toxicity as smaller amounts of the medicine are used for localised delivery, thereby avoiding full-body exposure. The gradual release arrests bacterial infections throughout the healing period.

“This process would also ensure delivery of the required amount of drug to the implanted site, which is otherwise not so easy for the drugs to reach if applied through intravenous or oral route of delivery,” added Dr Lahiri.

While the next stage of testing procedures are underway, the team is parallelly working on introducing combination drugs into the polymer.