Difference between conventional chromatography and HPLC.

Conventional chromatography: For example Liquid chromatography shown in figure 1.11is an analytical chromatographic technique that is useful for separating ions or molecules that are dissolved in a solvent. If the sample solution is in contact with a second solid or liquid phase, the different solutes will interact with the other phase to differing degrees due to differences in adsorption, ion-exchange, partitioning, or size. These differences allow the mixture components to be separated from each other by using these differences to determine the transit time of the solutes through a colum.

Conventional liquid chromatography uses plastic or glass columns that can range from a few centimetres to several meters. The most common lengths are 10-100 cm, with the longer columns finding use for preparative-scale separations. It is most commonly used in preparative scale work to purify and isolate some components of a mixture. It is also used in ultra-trace separations where small disposable columns are used once and then discarded. HPLC:High-performance liquid chromatography shown in figure 1.12 (HPLC; formerly referred to as high-pressure liquid chromatography), is a technique in analytic chemistry used to separate the components in a mixture, to identify each component, and to quantify each component. It relies on pumps to pass a pressurized liquid solvent containing the sample mixture through a column filled with a solid adsorbent material. Each component in the sample interacts slightly differently with the adsorbent material, causing different flow rates for the different components and leading to the separation of the components as they flow out the column. This technique provides higher resolution and faster analysis time. 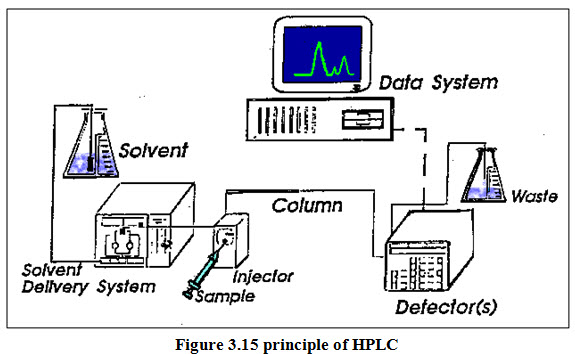 High-performance liquid chromatography (HPLC) columns are stainless steel tubes, typically of 10-30 cm in length and 3-5 mm inner diameter. Short, fast analytical columns, and guard columns, which are placed before an analytical column to trap junk and extend the lifetime of the analytical column, are 3-10 cm long. HPLC has been used for medical (e.g. detecting vitamin D levels in blood serum), legal (e.g. detecting performance enhancement drugs in urine), research (e.g. separating the components of a complex biological sample, or of similar synthetic chemicals from each other), and manufacturing (e.g. during the production process of pharmaceutical and biological products) purposes. Analytical Pumps (Solvent Delivery System) The requirements for HPLC pumps are as follows: They must be able to generate high pressures, have a pulse free output, deliver flow rates ranging from 0.1 to 10 ml/min, have flow reproducibility’s of 0.5% relative or better and they must be resistant to corrosion by a variety of solvents. Various types of pumping systems are-

A.  Direct Gas-pressure Systems This system consists of a cylinder gas pressure, which is applied directly to the eluent in a holding coil. Advantages of this pump are that it is reliable and economical although solvent changing is found to be tedious.

B.  Syringe type Pumps In these pumps an electrically driven lead-screw moves a piston, which is able to pressurize a finite volume of solvent, and thus delivers a pulseless constant flow of solvent to the system. These pumps are found to be reliable although they are expensive, solvent changing is tedious and they have a finite capacity. (~250 ml).

C.  Pneumatic Intensifier (Constant Pressure) Pumps These pumps are operated via gas pressure. A large area piston drives a small area piston when acted on by pressure from a gas line. The gas pressure is thus amplified in the ratio of the areas of the forces of the pistons and a high pressure liquid at constant pressure is introduced into the system. If a partial blockage occurs in this system a drop in flow rate occurs but the pressure remains constant. The flow sensitivity of the detector cell will determine how much pulse damping is required in the system to suppress the detector signal caused when the flow stops during the return stroke

D. Reciprocating (Constant Flow) Pumps It is the most generally used pump as it is ecoomical and allows a wide range of flow rates. There is no limit on the reservoir size or operating time with this pump as is commonly found with other pumps. This pump is electrically driven by a motor, which moves back and forth within a hydraulic chamber. On the backward stroke the piston sucks in eluent from the reservoir and due to check valves the outlet to the separation column is closed. During the forward stroke the eluent is pushed onto the column and the inlet from the reservoir is closed. These pumps include a high output pressure with constant flow rates and the ability to be used for gradient elution

Polystyrene/Divinylbenzene- Based Resins
In ion chromatography, the support material is polystyrene/ divinylbenzene (PS/DVB) based resin that is relatively stable with respect to pH.
•   The copolymerization of PS with DVB is used to give the resin mechanical stability.
•   The amount of DVB in the resin is denoted as “percent crosslinking”. The percentage of cross linking is directly related to the extent to which PS/DVB resin shrinks or swells in an aqueous media or in the presence of organic solvents.
•   If the resin shrinks a loss in column efficiency occurs as a dead volume occurs at the beginning of the column.
•   Swelling of the resin leads to higher column backpressures. The optimum degree of cross linking is said to be 2-5%

a) Anion –Exchange Resin
•  These resins used by Dionex are composed of a surface sulphonated PS/DVB core (10-25 µm) and a totally porous latex particle (0.1 µm), which is completely aminated.
•  Electrostatic and van der Waals interactions are used to agglomerate the latex particles onto the core particles.
•  It is the latex particles that carry the actual ion exchange function.
•  Advantages of this stationary phase include mechanical stability of the resin due to the inner core, which also ensures moderate backpressures.
•  Rapid exchange processes and thus high efficiencies occur due to the small, totally porous, latex particles.
•  Surface sulphonation greatly reduces swelling and shrinking of the material.

b)Cation-Exchange Resins
The stationary phase of a cation exchange column is based on inert, surface sulphonated, cross linked polystyrene.
The exchange process for a cation M+, occurs as follows:
~SO3H+ + M+A- <-------> ~SO3M+  + H+A-

c) Silica based Resins
• Silica based resins are one of the most important classes of ion-exchangers used in chromatography.
•    There are two main groups of silica based materials namely polymer coated and functionalized silica materials.
•    Polymer coated materials consist of silica particles which are coated with a layer of polymer such as polystyrene, silicone or fluorocarbon and then derivitised to introduce functional groups.
•    Advantages of polymer coated materials are that diffusion in the thin layer of the polymer occurs more rapidly than it would in totally polymeric particles.
• Functionalized silica materials comprise a functional group, which is chemically bonded directly to a silica particle.
•  Disadvantage of silica based resin is that they can only be operated over a limited pH range.

d)Chelating Resins
•  Chelating resins, which are able to separate metal ions, are made up of a suitable ligand immobilized onto a stationary phase.
•  Many chelating resins have been synthesized using styrene-divinyl benzene polymers or silica as the support material.
• The ligands are chemically bound to the stationary phase by an appropriate reaction.
•  Broad peaks are characteristic of slow formation and dissociation rates.

Detectors of HPLC:
1. UV Detectors
•  UV detectors measure the change in the UV absorption as the solute passes through a flow cell.
•  In a UV transparent solvent UV detectors are concentration sensitive.
• It has a degree of selectivity and is useful for many HPLC applications.

2. Refractive Index Detectors
•  These detectors measure the change in refractive index in the eluent as the solute passes through the sample cell.
•  It is virtually a universal detector but has limited sensitivity as compared to UV detector although non chromatographic compounds can be measured directly without derivitisation.

3. Fluorometric Detectors
•  In this detection system the solute is excited by UV radiation at a particular wavelength and the emission wavelength is detected.
•   This detection has been used with naturally fluorescent compounds but compounds can be reacted to produce fluorescent derivatives.
•These detectors are highly selective and sensitive, often used to analysederivatized compounds.

4. Conductivity Detector
•  These are used to analyse charged or polar compounds and the mobile phase used must be conducting in these detectors.
•   It is excellent for ion exchange methods.

5. Electro-chemical Detector
• Such detectors are used to analyse readily oxidized or reduced compounds, especially biological samples.
•   In these detectors also, the mobile phase must be conducting.
•  The advantage of these detectors is that these are very selective and sensitive.

6. Evaporative light scattering Detectors (ELSD)
•    These are used to analyse virtually all compounds.
•    In these detectors, volatile solvents and volatile buffers are used.
•    It is a universal detector which is highly sensitive but not selective.

7. Mass spectrometer (MS)
•    It is used to analyse a broad range of compounds.
• In such detection, volatile solvents and buffers are used most importantly.
•  This detection is highly sensitive and is a powerful 2-dimensional analytical tool