VALIDATED STABILITY INDICATING RP-HPLC METHOD FOR THE SIMULTANEOUS ESTIMATION OF DROTAVERIN.HCL & ACECLOFENAC IN BULK AND FORMULATION

ABSTRACT
The present research work deals with the development  and validation of  stability indicating RP-HPLC method for the simultaneous estimation of Aceclofenac and Drotaverin.HCl in bulk and formulation. Chromatographic separation was achieved on ODS HG-5 RP   C18(250 X 4.6 mm, 5 µm) using the mobile phase consisting of Acetonitrile and1% triethylamine (TEA) in the ratio of 90:10 pH  2.16 adjusted with Ortho phosphoric acid. The mobile phase was pumped at a flow rate of 1.0 mL/min and UV detection was observed  at 224 nm. The retention time was found to be 3.57 min for Aceclofenac and 6.15 min for Drotaverin.HCl. The linearity concentrations are obtained from in the range of 30-70 µg/ml for Aceclofenac and 24-56 µg/ml for Drotaverin.HCl respectively with correlation coefficient was 0.999 and 0.998. The proposed method was found to be simple, accurate, precise and reproducible and developed method can be suggest to routine quality control analysis for simultaneous estimation of Aceclofenac and Drotaverin.HCl in pharmaceutical dosage forms. 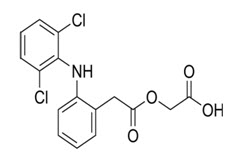 Drotaverin  HCl chemically known as (1Z)-1-[(3,4-diethoxyphenyl)methylidene]-6,7-diethoxy-1,2,3,4-tetrahydroisoquinoline.It is a selective inhibitor of phosphodiesterase 4, and has no anticholinergic effects. Drotaverin  has been shown to possess dose-dependant analgesic effects in animal models. One small study has shown drotaverin to be eliminated mainly non-renally (Mahajan VK et al, 2006). 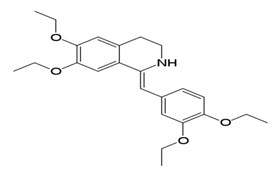 Extensive survey of literature very few methods have been reported for the quantification of Aceclofenac and Drotaverin in invidully and combined dosage form by using UV (Jameelunnisa B and Abdul R , 2008)  and RP-HPLC (Bolaji O et al, 1993)( Rasagna A et al, 2014) methods. Then need to develop  simple, precise, accurate, robust and cost effective stability indicating RP-HPLC method for the simultaneous estimation of Aceclofenac and Drotaverin in bulk and pharmaceutical dosage form.

Preparation of Mobile phase
Pipette out 2 ml of TEA and then dissolve in 200ml of HPLC grade water .Then adjust the PH to 2.16 with diluted ortho phosphoric acid. Mixture of Acetonitrile and TEA in the ratio of 90:10% v/v was prepared and used. Before preceding the analysis mobile phase was degssed by sonicator and filtered with 0.45 µ membrane filter.

Preparation of standard solution
About 100 mg of Aceclofenacand 60 mg of   Drotaverin.HCl were weighed and transferred into a 100 mL volumetric flask containing 25 mL of water. The solution was stirred for 5 minutes and made up with a further quantity of the mobile phase to get 0.1mg/mL and 0.5 mg/mL Aceclofenac and  Drotaverin.HCl respectively. This solution was further diluted to get required concentrations during study.

Preparation of Sample Solution:
Aceclofenac and  Drotaverin. HClcombined dosage form was purchased from the Local market. 20 tablet are individually weighed and powdered. Drug equivalent to 10 mg of Aceclofenac and  Drotaverin tablet powder transferred into 10 ml volumetric flask dissolved in 7 ml of mobile phase . The contents of the flask were sonicated for about 20 min for complete solubility of the drug and the volume was made up to 10 mL with mobile phase. Then the mixture was filtered through 0.45μ membrane filter. The mean peak areas of the drugs were calculated and the drug content in the formulation was calculated. 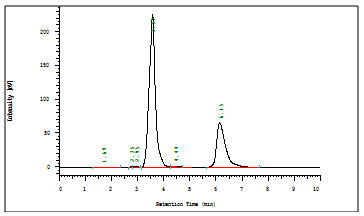 Specificity
The system suitability for specificity was carried out to determine whether there is any interference of any impurities in retention time of analytical peak. The study was performed under Different conditions like Acid, Base, Heat and H2O2. Finally it calculates the how much amount of the drug degraded. The specificity data was shown in table 2.

System suitability:
The system performance parameters obtained from system suitability test were found to be within limits for Drotaverin.Hcl &Aceclofenac indicated that the developed method is precise. The results were shown in table 3.

Linearity
The data obtained in the calibration studies when subjected to linear-regression analysis showed a linear relationship between peak areas and concentrations in the range of 24-56 µg/ml for Drotaverin and 30-70µg/ml for Aceclofenac. The linearity of calibration graphs and adherence of the system to Beer’s law was validated by high value of correlation coefficient. The data of regression analysis and calibration curve were shown in Table 4 and Figure 4 &5.

Accuracy
The recoveries obtained were indicating that the method was accurate. Commonly used formulation excipients were subjected to chromatographic analysis and it was observed that there was no interfering peak at the retention time of Drotaverin.HCl& Aceclofenac.The accuracy of the test method was demonstrated by preparing recovery samples (i.e., test Sample) with known quantities at the level of 80%, 100% and 120% of target concentration.

Precision
10 ml of standard stock solution was diluted in 100 ml standard volumetric flask. up  to volume with diluent.Precision was demonstrated by prepared six sample preparations as per the test method representing a single batch. Repeat the same procedure for remaining six preparations.% RSD to be tabulated with obtained readings in tabular form5 and 6.

Flow variation:
Robustness of test method was demonstrated by injecting system suitability and test preparation under normal condition (i.e. as such condition) and each of the altered conditions mentioned below

RESULTS AND DISCUSSION
Linearity
Correlation coefficient of the linearity study was found to R2 =0.998 and 0.999 with linear regression equation Y=46573X+5706 for Drotaverin and Y=161434X-32034 for Aceclofenac, which proves the method was linear.
Accuracy
As the recovery results are found between 98.0% to 102.0%, the study proves that the
Method is accurate for the estimation.
Precision
The %RSD of areas from six preparations precision level should not be more than 2.0%.

Table 2: Observation of Specificity data of the proposed method 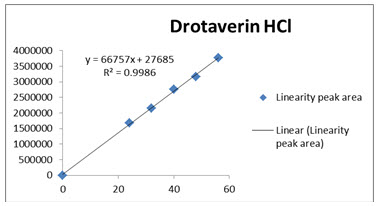 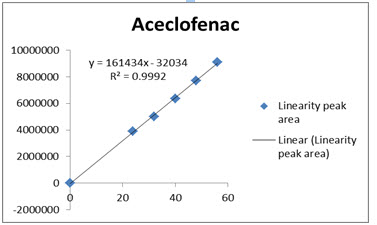 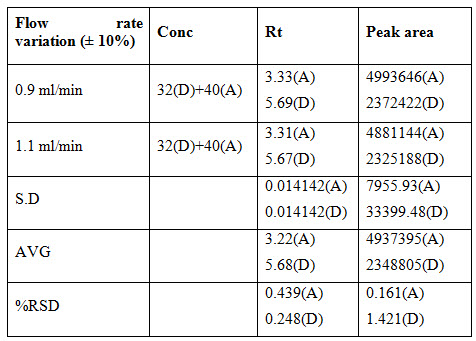 CONCLUSION
A simple, precise, robust and cost effective stability indicting RP-HPLC method has been developed & validated for the analysis of Drotaverine and Acceclofenac API. Based on peak purity results, obtained from the analysis of samples using described method, it can be concluded that the absence of co-eluting peak along with the main peak of Drotaverine &Acceclofenac indicated that the developed method is specific for the estimation of Drotaverine &Acceclofenac. Further the proposed RP-HPLC method has excellent sensitivity, precision and  reproducibility. Even though no attempt has been made to identify the degraded products proposed method can be used as a stability indicating method for assay of Drotaverine and Acceclofenac in commercial formulations.