Objective
Glimepiride is an anti-diabetic drug with shorter half-life of 5 hrs. Glimepiride penetration into skin is difficulty. To study effects the penetration of glimepiride using different surfactants using dibutylpthalate.

Conclusion
From the results glimepiride with SLS anionic surfactant shows good penetration. Dibutylpthalate acts a plasticizer which improves the penetration of glimepiride.

INTRODUCTION
The TDDS formulated by considering 3 factors drug, skin & vehicles. The components of the system include the drug dissolved or dispersed in an inert polymer matrix that provides support and platform for drug release [Amnuaikit C et al., 2005.]. Most of the drug substances will not diffuse into the skin to get sufficient rates to obtain therapeutic concentration. Transdermal delivery can increase the therapeutic value of many drugs by avoiding specific problems associated with the drug i.e. gastro intestinal irritation, low absorption, decomposition due to hepatic first pass effect, short half-life necessating frequent dosing[Arora P et al., 2002]. Self medication is possible with these medication. Diabetes mellitus is mainly classified as four types. They are, Type -I, Type –II, Gestational diabetes, and other types of diabetes. Glimepiride is sulphonyl urea and it is a very potent sulphonyl urea with long duration of action. Eudragit E-100 used as a matrix forming layer surfactants sodium lauryl sulphate, polysorbate 60 and polysorbate 80. The rate of drug permeation through the eudragit E-100 membrane was proportional to the dibutylthalate volume fraction. The release of glimepiride from the matrix was examined using a Franz diffusion cell [Aulton ME. Pharmaceutics; 2002]. A plasticizer was added to prepare the pore structure of the Eudragit matrix in order to increase the rate of drug release. The effects of surfactants with plasticizer on the drug release rate were investigated [Chien YW Transdermal therapeutic system ., 1987]. Various types of surfactants were added to a matrix containing 2% glimepiride in an attempt to increase the level of permeation through a Eudragit E 100 matrix. The effects of surfactants on glimepiride permeation through the membrane were evaluated using Franz diffusion cell. Anionic surfactants are effective than cationic and non-ionic surfactants in enhancing the skin penetration of targeted molecules. In the present study we are comparing surfactants with plasticizer dibutylpthalate on the effect of glimepiride penetration and drug release [Swati Hardainiyan; 2017].

PREPARATION OF PATCH
Patches are prepared by using solvent casting method. Petridish with area 38.25cm2 was used. Polymers were weighed accurately and dissolved in 10ml of methanol & water (1:1) kept aside to form clear solution.40mg of drug added to the all formulation. Different surfactants sodium lauryl sulphate, polysorbate 60, polysorbate 80 were compared for penetration enhancers. The solution was poured on the Petridish which is lubricated with glycerin & dried at room temperature for 24hours. An inverted funnel places over the Petridish to prevent evaporation of the solvent. Patches are stored in decicator [Devi VK et al., 2003].

Tensile strength
Determined by pulling system using hands. The elongation i.e. distance travelled by the pointer before break is noted from the graph paper.

Folding endurance
Determined by repeatedly folding one film at same place till it broke. Repeat the process without breaking the no of times the folding gave the value of folding endurance [Gloxhuber C et al., 1992].

Drug content
Patches of specified area (1 cm2) were dissolved in 5mL of Methyl chloride and the volume was made up to 10mL with phosphate buffer pH 7.4; Methylchloride was evaporated using a rotary vacuum evaporator at 45 °C. A blank was prepared using a drug-free patch treated similarly [Lee CK et al., 1994]. The solutions were filtered through a 0.45μm membrane, diluted suitably and absorbance was read at 230 nm in a double beam UV-Vis spectrophotometer. From the drug release data F-1 shows good release. Formulation -1 considered as suitable surfactant for the release of the glimepiride drug. Skin penetration enhancers are molecules which reversibly remove the barrier resistance of the stratum corneum [Misra AN 1997 ; Nawal A. Rajab 2014]. Anionic surfactants have ability to solubilize the less soluble proteins such as zein, or can themselves remain on the skin due to formation of chemical compounds with skin keratin. Anionic promote the dissolution of the proteins out of the skin, cause release of sulfhydryl groups from the sclera proteins, react upon various enzymes of the skin. Anionic surfactant SLS shows good release compared to other cationic and non-ionic surfactants [Reiger MM et al., 1997].

PREPARATION OF THE EUDRAGIT E -100 COPOLYMER MEMBRANE
The Eudragit E -100 membrane was prepared using a casting method. Approximately 2 g of Eudragit E -100 copolymer and SLS was dissolved in 20ml of methylene chloride in a glass beaker. The polymer solution was poured onto a glass plate and the solvent was allowed to evaporate off overnight at room temperature [Rhein LD et al., 1986]. The membrane was then removed from the plate.

DRUG PERMEATION THROUGH THE EUDRAGIT E-100 MEMBRANE
Two chamber-diffusion cells were used to determine the steady state permeation of glimepiride through eudragit E-100membrane. Each half-cell has a volume of ~ 5ml and an effective diffusion area of 0.79 cm2[Swarbrick J. 2006].A piece of eudragit E-100 polymer with Sodium laurly sulphate membrane was clamped between the two halves of the assembled cell at 37°C. The donor compartment filled with drug and dibutylpthalate, the same concentration of a Dibutylpthalate solution (without the drug) was added to the receptor compartment to prevent solvent permeation from the donor to the receptor side on the glimepiride permeation through the membrane[Walters KA et al., 1988].The cell was shaken horizontally at 150 rpm to minimize the boundary effect. The total volume of the receptor solution was removed at predetermined intervals and replaced with 5ml of a fresh solution. The amount of drug permeated was determined at 230nm using a UV.

RESULTS AND DISCUSSION
Glimepiride is an anti-diabetic drug with low bioavailability and extensive first pass metabolism and short duration of action makes the drug suitable for transdermal delivery system .The present study was to formulate and evaluate transdermal drug delivery system of Glimepiride. The results from evaluation of patches from Table 2. The thickness for F-1 is 0.11, F-2 is 0.10, and F-3 is 0.11. This indicates that glimepiride patches prepared from different penetration enhancers shows similar thickness. Good uniformity of drug content among the formulations, F-1 shows good drug content uniformity. Folding endurance was good by using the plasticizer. Indicate that patches would not break and remain their integrity with general skin folding. The drug content in transdermal patch F-1 shows 98,F-2 shows 93, F-3 shows 92.the drug permeation through matrix membrane shows good release with Eudragit E-100 copolymer and surfactant SLS. Anionic suractants promote the penetration into the skin, it causes the dissolution of protien out of skin, cause release of the sulfhydryl groups. Higher concentrations promote the formation of micelles in the vehicle that trap the permeant and decrease the permeability. In comparison with three surfactants SLS gives good release for glimepiride with Eudragit E-100 matrix membrane. Dibutylpthalate gives good effect on penetration of glimepiride. 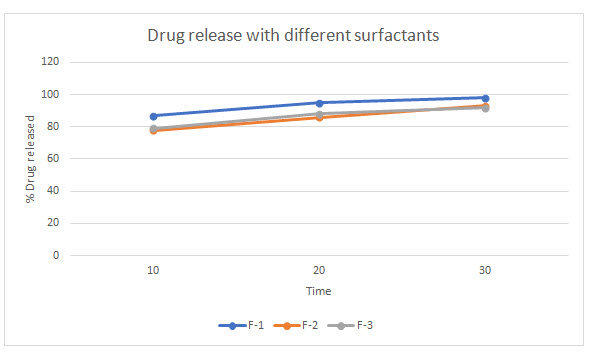 CONCLUSION
Effect of surfactants on Eudragit E-100 with glimepiride transdermal patch were prepared. All formulation also showed good physicochemical properties like thickness, drug content, and folding endurance. The in-vitro release data showed that drug release from the patch formulation have been affected by different surfactants and matrix copolymer. Effect of surfactants SLS, Polysorbate 60, and polysorbate 80 have been checked for drug content. From the drug release results it was concluded that surfactant SLS shows good release compared with others. These studies indicated that surfactants increases the drug permeation. From the results glimepiride with SLS anionic surfactant shows good penetration .dibutylpthalate acts a plasticizer which improves the penetration of glimepiride.