SURFACTANTS AND ITS APPLICATION IN PHARMACEUTICALS: AN OVERVIEW


Abstract
Recently, surfactants have become one of the most important chemical products. They have become a subject of research, and their production and their use are on the increase. This wide range of properties, uses for surfactants in pharmaceutical products and systems is to try and introduce and explain in the subject of this article. Wetting of Solids, Solubilization, Emulsification, Dispersion of solid in solution, Micellization & Detergency all these are properties of surfactant. Surfactants are classified according to their polar head group, the charged head referred as Ionic surfactants and uncharged surfactants are generally referred to as nonionic surfactant. Because of their unique functional properties, surfactants find a wide range of uses in pharmaceutical preparations. These include, depending on the type of product, improving the solubility or stability of a drug in a liquid preparation, stabilizing and modifying the texture of a semisolid preparation, or altering the flow properties of a granulate, thus aiding in the processing of the final tablet dosage form. In addition to their use as excipients to improve the physical and chemical characteristics of the formulation, surfactants may be included to improve the efficacy or bioperformance of the product. The properties of surfactants are such that they can alter the thermodynamic activity, solubility, diffusion, disintegration, and dissolution rate of a drug. Each of these parameters influences the rate and extent of drug absorption. Furthermore, surfactants can exert direct effects on biological membranes thus altering drug transport across the membrane. The overall effect of inclusion of a surfactant in a pharmaceutical formulation is complex and may be beyond those initially intended. Surfactants may reduce the effectiveness of antimicrobials or preservatives included in a formulation.

INTRODUCTION
Surfactants are widely used in molecular biology in formulating new and in modifying existing medical preparations, in the production of proprietary medicines, in the production of chemical preparations aimed for the domestic use, etc. All this is understandable since the properties of surfactants are to some degree responsible for the existence and the performance of cellular membranes, emulsification, solubilization, and of transport of compounds that are otherwise insoluble in living tissues. Surfactants also function as film formation promoters, as wetting agents, detergents, bactericidal agents, etc.
The number of specialists interested in surfactants is indeed very large and the literature devoted to surfactants is correspondingly wide. However, an adequately comprehensive and contemporary monograph on surfactants is currently not available. This wide range of properties, uses for surfactants in pharmaceutical products and systems is to try and introduce and explain in the subject of this article.[1]

PHYSICOCHEMICAL BACKGROUND
* Surface And Interfacial Tension [2]
Atoms and molecules at surfaces and interfaces possess energies significantly different from those of the same species in the bulk phase.

Generally when two / more phases exist together, the boundary between them is termed an interface. The term ‘‘surface’’ is usually reserved for the region between a condensed phase (liquid or solid) and a gas phase or vacuum, while the term ‘‘interface’’ is normally applied to the region between two condensed phases i.e. solid-solid, solid-liquid and liquid-liquid (immiscible), but gas-gas dose not have surface or interface.

The following are the surface tensions for some liquid substances

Table No.1: Surface Tensions for Some Liquid Substances

Interfacial tension is the force per unit length existing at the interface between two immiscible liquid phases and like surface tension has the units of dyne / cm.[3]

* Surfactants
Surfactants are termed as surface-active agents also wetting agents, emulsifying agents or suspending agents depending on its properties and use.
Surface-active agents are substances which, at low concentrations, adsorb onto the surfaces or interfaces of a system and alter the surface or interfacial free energy and the surface or interfacial tension.[5, 6] Surfactants are monomers, it has a characteristic structure possessingboth hydrophobic groups / non-polar regions (their "tails") usually contain a C12–C18 hydrocarbon chainand hydrophilic groups / Polar Regions(their "heads"). Therefore, they are soluble in both organic solvents and water, so they called amphiphilic.[7]

•  Adsorption Phenomena of Surfactant[2]
Adsorption may be defined as the process of enrichment of one or more substances at a surface or as the taking up of one substance at the surface of another. It can occur at any type of interface. However, in the context of pharmaceutical systems the interfaces where surfactant adsorption is important are the liquid–liquid, gas–liquid, gas–solid, and liquid–solid interfaces. 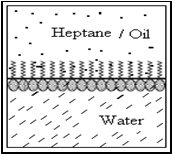 Fig.No.2 Alignment Of Surfactant At A Liquid- Liquid Interface. 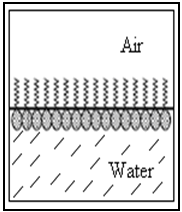 Fig.No.3. Alignment of Surfactant At A Liquid- Gas Surface.

•  Adsorption At Solid–Liquid Interfaces
Adsorption of surfactant from an aqueous solution onto a solid surface may involve specific chemical interaction between the surfactant (adsorbate) and the surface (adsorbent).