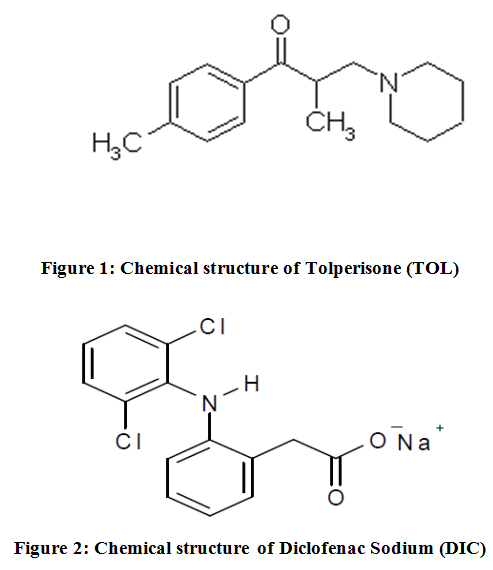 Apparatus
A shimadzu model 1700 (Japan) double beam UV/Visible spectrophotometer with spectral width of 2 nm, wavelength accuracy of 0.5 nm and a pair of 10 mm matched quartz cell was used to measure absorbance of all the solutions. Spectra were automatically obtained by UV-Probe system software. A Sartorius CP224S analytical balance (Gottingen, Germany), an ultrasonic bath (Frontline FS 4, Mumbai, India) was used in the study.

Preparation of standard stock solutions
An accurately weighed standard TOL and DIC powder (10 mg) were weighed and transferred to 100 ml separate volumetric flasks and dissolved in methanol. The flasks were shaken and volumes were made up to mark with methanol to give a solution containing 100 μg/ml of each TOL and DIC.

Method precision (repeatability)
The precision of the instrument was checked by repeated scanning and measuring the absorbance of solution of (n = 6) TOLand DIC (8 µg/ml) without changing the parameters of First Derivative Method.

Intermediate precision (reproducibility)
The intraday and interday precision of the proposed method was determined by analyzing the corresponding responses 3 times on the same day and on 3 different days over a period of 1 week for 3 different concentrations of standard solutions of TOL and DIC (4, 8, 12 µg/ml for TOL and 4, 8, 12 µg/ml for DIC). The result was reported in terms of relative standard deviation (% RSD).

Where, σ = the standard deviation of the response and S = slope of the calibration curve

Analysis of synthetic mixture
After proper dilution of prepared solution of synthetic mixture the absorbance of the sample solution was measured at 257 nm and 306.20 nm for quantitation of TOL and at 243.40 nm and 265.40 nm for quantitation of DIC, respectively. The amounts of the TOL and DIC present in the sample solution were calculated by fitting the responses into the regression equation for TOL and DIC in the First Derivative Method.