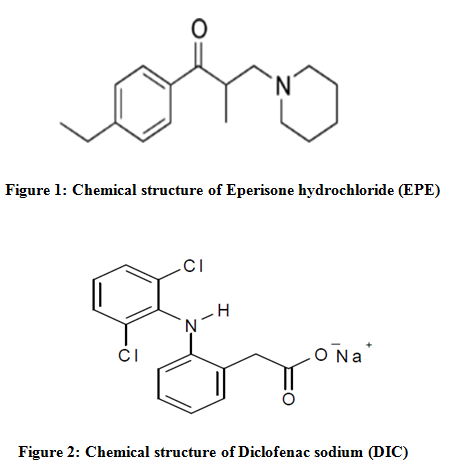 Apparatus
A Shimadzu model 1700 (Japan) double beam UV/Visible spectrophotometer with spectral width of 2 nm, wavelength accuracy of 0.5 nm and a pair of 10 mm matched quartz cell was used to measure absorbance of all the solutions. Spectra were automatically obtained by UV-Probe system software. A Sartorius CP224S analytical balance (Gottingen, Germany), an ultrasonic bath (Frontline FS 4, Mumbai, India) was used in the study.

Preparation of standard stock solutions
An accurately weighed standard EPE and DIC powder (10 mg) were weighed and transferred to 100 ml separate volumetric flasks and dissolved in methanol. The flasks were shaken and volumes were made up to mark with methanol to give a solution containing 100 μg/ml of each EPE and DIC.

RATIO SPECTRA DERIVATIVE METHOD
This method works on two mechanisms viz. (1) Ratio and (2) Derivatization. In this method, the mixture spectra are divided with the divisor and first derivative spectra of these ratio spectra are generated. The main advantage of the ratio-spectra derivative spectrophotometry is the chance of doing easy measurements in correspondence of peaks so it permits the use of the wavelength of highest value of analytical signals (a maximum or a minimum). Moreover, the presence of a lot of maxima and minima is another advantage by the fact that these wavelengths give an opportunity for the determination of active compounds in the presence of other compounds and excipients which possibly interferes the assay. For the determination of EPE, the spectra of EPE at increasing concentrations in methanol were divided by previously stored absorption spectrum standard solution of  DIC (12 µg/ml) to obtain the corresponding ratio spectra. Then the first derivative of the obtained ratio spectra were traced with interval of Δλ=8 nm. In the binary mixtures, content of EPE was determined by measuring the first derivative amplitude at 247 nm, where there is no contribution or interference from DIC.

On the other hand, for the determination of DIC, an analogous procedure was followed. The spectra of DIC at increasing concentrations were divided by previously stored spectrum of 12 µg/ml solution of EPE and the first derivative of the developed ratio spectra were traced with Δλ=8 nm. In the binary mixtures, content DIC was determined by measuring the first derivative amplitude at 218.4 nm, where there is no contribution or interference from EPE.

First-derivative technique (D1) traced with Δλ=8 nm was used to resolve the spectral overlapping. The calibration curves were checked for linearity and linear behavior was observed in the concentration range of 2-18 µg/ml, for each of the drugs.

VALIDATION OF THE PROPOSED METHOD
The proposed method was validated according to the International Conference on Harmonization (ICH) guidelines [34].

Ratio spectra Derivative Spectrophotometry Method
The absorption spectra of EPE prepared at increasing concentrations in Methanol were recorded in the spectral region of 200-400 nm and divided by the previously stored spectrum of 12 µg/ml DIC in the same solvent and their ratio spectra were obtained as seen in the Fig-4a. Then, the first derivatives of ratio-spectra were recorded as shown in Fig. 4b and the values of the derivatives were measured at suitably selected wavelength for the determination of EPE. The concentration of divisor can be modified, and different calibration graphs are then obtained. A concentration of 12 µg/ml of DIC was considered as suitable. The calibration graph was established by measuring at the amplitude at 247 nm corresponding to a maximum wavelength.

For determining DIC, an analogous procedure was followed. The ratio spectra were obtained by dividing the spectra of DIC with previously stored spectrum of a 12 µg/ml EPE solution as shown in figure-5a and their first derivatives were calculated which is shown in figure-5b. The values of the derivatives were measured at suitably selected wavelength for the determination of DIC. A concentration of 12 µg/ml of EPE was considered as suitable. The calibration graph was established by measuring at the amplitude at 218.4 nm corresponding to a maximum wavelength.

Linearity (Calibration curve)
Linearity of the proposed method was determined by analyzing the solution of EPE and DIC in the range of 2-18 µg/ml. The limit of detection (LOD) and the limit of quantification was then established by evaluating the minimum level at which drug solution can be readily quantified with accuracy.

Method precision (Repeatability)
The precision of the instrument was checked by repeated scanning and measurement of absorbance of solutions (n = 6) for EPE and DIC (12 µg/ml for both drugs) without changing the parameter of the proposed spectrophotometry method.

Intermediate precision (Reproducibility)
The intraday and interday precision of the proposed method was determined by analyzing the corresponding responses 3 times on the same day and on 3 different days over a period of 1 week for 3 different concentrations of standard solutions of EPE and DIC (6, 10, 14 µg/ml for EPE and 6, 10, 14 µg/ml for DIC). The result was reported in terms of relative standard deviation (% RSD).

Where, σ = the standard deviation of the response and S = slope of the calibration curve

Analysis of synthetic mixture
Eperisone hydrochloride (50 mg) and Diclofenac sodium (50 mg) standard drug powder were accurately weighed and then mixed with commonly used formulation excipients like starch, lactose, magnesium stearate and talc. The mixture was then transferred to 100 ml volumetric flask containing 50 ml methanol and sonicated for 20 min. The solution was filtered through Whatman filter paper No. 41 and the volume was adjusted up to the mark with methanol. This solution (0.2 ml) was taken in to a 10 ml volumetric flask and the volume was adjusted up to mark with methanol to get a final concentration of EPE (10 µg/ml) and DIC (10 µg/ml)  and were recorded at selected wavelengths for determination of EPE and DIC. The analysis procedure was repeated six times.