ABSTRACT
Today the world has suffered to the Zika virus is a flavivirous related to yellow fever, dengue, West Nile and Japanese encephalis virus. Zika virus causes acute, serious illness which is often fatal if it is not treated. Its name comes from the Zika forest of Uganda. Zika is a mosquito born disease. Zika virus disease is caused by a virus transmitted primarily by Aedes mosquitoes. People with Zika virus disease can have symptoms including mild fever, skin rash, conjunctivitis, muscle and joint pain, malaise or headache. These symptoms normally last for 2-7 days. There is scientific consensus that Zika virus is a cause of microcephaly and Guillain-Barré syndrome. Links to other neurological complications are also being investigated. Neither an effective treatment nor a vaccine is available for Zika virus; therefore, the public health response primarily focuses on preventing infection, particularly in pregnant women. These article also covers from where the zika was firstly introduced or its history, its transmissions, causes, diagnosis, treatment and some current affairs.

INTRODUCTION
Zika virus disease is a mosquito-born disease caused by Zika virus. Most infections are either asymptomatic or cause a mild illness with a transient maculopapular rash.
The Aedesaegypti mosquito is the main vector but other Aedes species can also transmit the virus. Sexual transmission via semen has been reported recently.

Viral circulation and a few outbreaks were documented in tropical Africa and in some areas in south-east Asia. Since 2007, several island of the pacific region have experienced outbreaks were reported in the Americas emerging infectious disease. ( World health organisation. Zika virus., 2017.)

Zika virus is a mosquito-borne flavivirus that was first identified in Uganda in 1947 in monkeys through a network that monitored yellow fever. It was later identified in humans in 1952 in Uganda and the United Republic of Tanzania. Outbreaks of Zika virus disease have been recorded in Africa, the Americas, Asia and the Pacific. From the 1960s to 1980s, human infections were found across Africa and Asia, typically accompanied by mild illness. The first large outbreak of disease caused by Zika infection was reported from the Island of Yap (Federated States of Micronesia) in 2007. In July 2015 Brazil reported an association between Zika virus infection and Guillain-Barré syndrome. In October 2015 Brazil reported an association between Zika virus infection and microcephaly.( An agency of the European Union, Factsheet about zika virus disease.,2017.)

HISTORY OF ZIKA VIRUS
The Zika virus is a mosquito-transmitted infection related to dengue, yellow fever and West Nile virus. Although it was discovered in1947 in the Zika forest, near the East African Virus Research Institute in Entebbe, Uganda. Zika was later identified in humans in 1952. 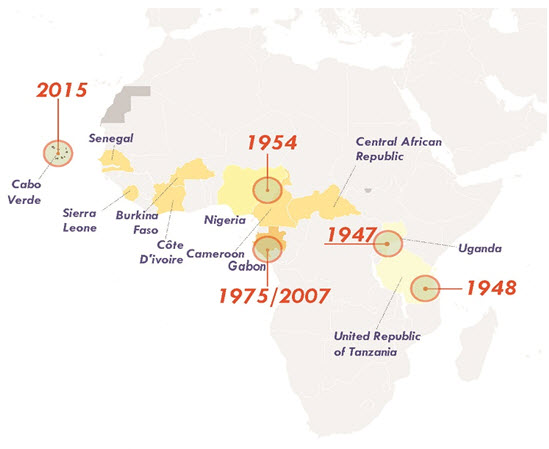 1947:  Scientists conducting routine surveillance for yellow fever in the Zika forest of Uganda isolate the Zika virus in samples taken from a captive, sentinel rhesus monkey.

1948:  The virus is recovered from the mosquito Aedesafricanus, caught on a tree platform in the Zika forest.

1952: The first human cases are detected in Uganda and the United Republic of Tanzania in a study demonstrating the presence of neutralizing antibodies to Zika virus in sera. 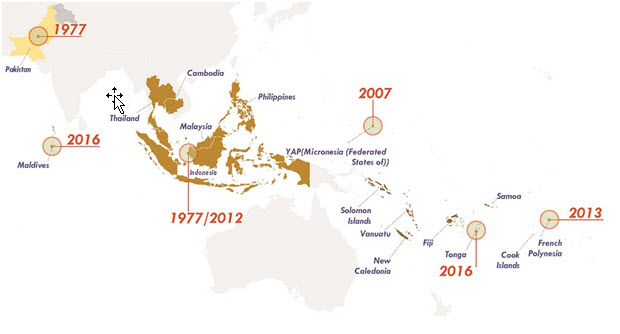 1969–1983:  The known geographical distribution of Zika expands to equatorial Asia, including India, Indonesia, Malaysia and Pakistan, where the virus is detected in mosquitoes. As in Africa, sporadic human cases occur but no outbreaks are detected and the disease in humans continues to be regarded as rare, with mild symptoms.

2007:  Zika spreads from Africa and Asia to cause the first large outbreak in humans on the Pacific island of Yap, in the Federated States of Micronesia. Prior to this event, no outbreaks and only 14 cases of human Zika virus disease had been documented worldwide.

2013–2014:  The virus causes outbreaks in four other groups of Pacific islands: French Polynesia, Easter Island, the Cook Islands, and New Caledonia. The outbreak in French Polynesia, generating thousands of suspected infections, is intensively investigated. The results of retrospective investigations are reported to WHO on 24 November 2015and 27 January 2016. 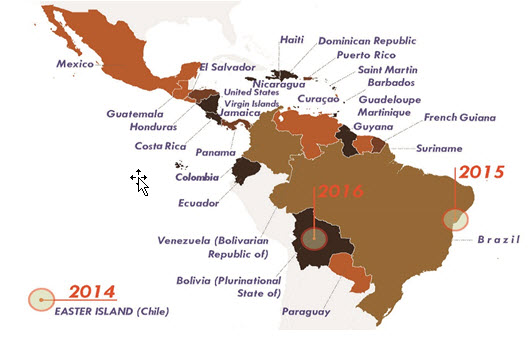 2 March 2015: Brazil notifies WHO of reports of an illness characterized by skin rash in north-eastern states. From February 2015 to 29 April 2015, nearly 7000 cases of illness with skin rash are reported in these states. All cases are mild, with no reported deaths. Zika was not suspected at this stage, and no tests for Zika were carried out.

1 February 2016:  WHO declares that the recent association of Zika infection with clusters of microcephaly and other neurological disorders constitutes a Public Health Emergency of International Concern. [World health organisation. The history of Zika virus. 2017, Zika Virus Net .com. History of zika virus, 2017)

Transmission
Zika virus is primarily transmitted to people through the bite of an infected mosquito from the Aedes genus, mainly Aedesaegypti in tropical regions. Aedes mosquitoes usually bite during the day, peaking during early morning and late afternoon/evening. This is the same mosquito that transmits dengue, chikungunya and yellow fever. Sexual transmission of Zika virus is also possible. Other modes of transmission such as blood transfusion are being investigated.

Sexual transmission
Zika virus can be transmitted through sexual intercourse. This is of concern due to an association between Zika virus infection and adverse pregnancy and fetal outcomes.

For regions with active transmission of Zika virus, all people with Zika virus infection and their sexual partners (particularly pregnant women) should receive information about the risks of sexual transmission of Zika virus. WHO recommends that sexually active men and women be correctly counselled and offered a full range of contraceptive methods to be able to make an informed choice about whether and when to become pregnant in order to prevent possible adverse pregnancy and fetal outcomes. Women who have had unprotected sex and do not wish to become pregnant due to concerns about Zika virus infection should have ready access to emergency contraceptive services and counselling. Pregnant women should practice safer sex (including correct and consistent use of condoms) or abstain from sexual activity for at least the whole duration of the pregnancy.