A REVIEW ON PHARMACEUTICAL ANALYSIS OF MASS SPECTROSCOPY

ABSTRACT
The goal of this review is to provide a guide for understanding current MS technology. Mass spectrometry (MS) has progressed to become a powerful analytical tool for both quantitative and qualitative applications. Proteomics research, in particular, increasingly depends on MS technologies. Basically, any information gathered from a mass spectrometer comes from the analysis of gas-phase ions. There are three main components of a mass spectrometer: an ionization source, a mass analyzer and a detector the name ‘mass spectrometry’ is a misnomer of sorts. The mass is not what is measured; instead, mass spectrometry determines the mass-to-charge (m/z) ratio or a property related to m/z .A mass spectrum is a plot of ion abundance versus m/z, although in many cases the x-axis is labelled ‘mass’ rather than m/z. The spectrum is presented in terms of Daltons (Da) per unit charge The ability of mass spectrometry analyzing proteins and other biological extracts is due to the advances gained through the development of soft ionization techniques such as electrospray ionization (ESI) and matrix-assisted laser desorption ionization (MALDI) that can transform biomolecules into ions. Regardless of the ionization source, the sensitivity of a mass spectrometer is related to the mass analyzer where ion separation occurs.

INTRODUCTION
Mass spectrometry was first described by physicists in the late 1880s. WilhelmWien, for example, was the first to demonstrate in 1898 that superimposed electric and magnetic fields can deflect positive ions and his work was preceded by the work of physicist Eugen Goldstein, who in 1886 discovered a new kind of radiation, “Kanalstrahlen” and reached the conclusion that these “new” rays were merely positively charged particles. Mass Spectrometry is a powerful technique for identifying unknowns, studying molecular structure, and probing the fundamental principles of chemistry. Applications of mass spectrometry include identifying and quantitating pesticides in water samples, it identifying steroids in athletes, determining metals at PPQ (Parts Per Quadrillion) levels in water samples.Mass spectrometry is essentially a technique for "weighing" molecules. Obviously, this is not done with a conventional balance or scale. Instead, mass spectrometry is based upon the motion of a charged particle, called an ion, in an electric or magnetic field. The mass to charge ratio (m/z) of the ion affects this motion. Since the charge of an electron[1] is known, the mass to charge ratio a measurement of an ion's mass. Typical mass spectrometry research focuses on the formation of gas phase ions[2] the chemistry of ions, and applications of mass spectrometry.This review articles cover the basics of mass spectrometry instrumentation of a mass spectra.

THE MASS SPECTROMETER
In order to measure the characteristics of individual molecules, a mass spectrometer converts them to ions so that they can be moved about and manipulated by external electric and magnetic fields. The three essential functions of a mass spectrometer and the associated components.[3]
1. A small sample of compound is ionized, usually to cations by loss of an electron.
2. In the Ion Source the ions are sorted and separated according to their mass and charge. The Mass Analyzer
3. In the Mass Analyzer the separated ions are then detected and tallied, and the results are displayed on a chart the Detector. 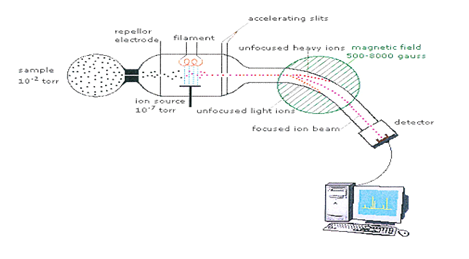 Electron Ionization
Electron Ionization (EI) is the most common ionization techniqueused for mass spectrometry. EI works well for many gas phase molecules, but it does have some limitations. Although the mass spectra are very reproducible and are widely used for spectral libraries, EI causes extensive fragmentation so that the molecular ion is not observed for many compounds. Fragmentation[5] is useful because it provides structural information for interpreting unknown spectra.

Chemical Ionization
Chemical Ionization (CI) is a “soft” ionization technique thatproduces ions with little excess energy. As a result, less fragmentation is observed in the mass spectrum. Since this increases the abundance of the molecular ion, the technique is complimentary to 70eV EI. CI is often used to verify the molecular mass of an unknown. Only slight modifications of an EI source region are required for CI experiments.

In Chemical Ionization the source is enclosed in a small cell with openings for the electron beam, the reagent gas and the sample. The reagent gas is added to this cell at approximately 10 Pa (0.1torr) pressure. This is higher than the 10-3 Pa (10-5torr) pressure typical for a mass spectrometer source. At 10-3 Pa the mean free path between collisions is approximately 2 meters and ion-molecule reactions are unlikely. In the CI source, however, the mean free path between collisions is only 10-4 meters and analyte molecules undergo many collisions with the reagent gas. The reagent gas in the CI source is ionized with an electron beam to produce a cloud of ions. The reagent gas ions in this cloud react and produce adduct ions like CH5+, which are excellent proton donors.

Fast Atom Bombardment and Secondary Ion Mass Spectrometry
Fast AtomBombardment (FAB) and Secondary Ion Mass Spectrometry (SIM S) both use high energy atoms to sputter and ionize the sample in a single step. In these techniques, a beam of rare gas neutrals (FAB) or ions (SIM S) is focused on the liquid or solid sample. The impact of this high energy beam causes the analyte molecules to sputter into the gas phase and ionize in a single step. The exact mechanism of this process is not well understood, but these techniques work well for compounds with molecular weights up to a few thousand Dalton.[6-12] Since no heating is required, sputtering techniques (especially FAB) are useful for studying thermally labile compounds that decompose in conventional inlets

Atmospheric Pressure Ionization and Electrospray Ionization
AtmosphericPressure Ionization (API) sources ionize the sample at atmospheric pressure and then transfer the ions into the mass spectrometer. These techniques[13] are used to ionize thermally labile samples such as peptides, proteins and polymers directly from the condensed phase. The sample is dissolved in an appropriate solvent and this solution is introduced into the mass spectrometer. With conventional inlets the solvent increases the pressure in the source region of the mass spectrometer.[14] In addition, Joule-Thompson cooling of the liquid as it enters the vacuum causes the solvent droplets to freeze. The frozen clusters trap analyte molecules and reduce the sensitivity of the experiment.

API sources introduce the sample through a series of differentially pumped stages. This maintains the large pressure difference between the ion source and the mass spectrometer without using extremely large vacuum pumps.[15] In addition a drying gas is used to break up the clusters that form as the solvent evaporates. Because the analyte molecules have more momentum than the solvent and air molecules, they travel through the pumping stages to the mass analyzer.

Electron Spray Ionization (ESI)
ESI is the most common API application. It has undergone remarkable growth in recent years and is frequently used for LC/M S of thermally labile and high molecular weight compounds. The electrospray is created by applying a large potential between the metal inlet needle and the first skimmer in an API source.[16] The mechanism for the ionization process is not well understood and there are several different theories that explain this ionization process. One theory is that as the liquid leaves the nozzle, the electric field induces a net charge on the small droplets. As the solvent evaporates, the droplet shrinks and the charge density at the surface of the droplet increases. The droplet finally reaches a point where the columbic repulsion from this electric charge is greater than the surface tension holding it together. This causes the droplet to explode and produce multiply charged analyte ions. A typical ESI spectrum shows a distribution of molecular ions with different charge numbers.

Matrix Assisted Laser Desorption/Ionization:
Matrix Assisted LaserDesorption/Ionization (MALDI) is used to analyze extremely large molecules. This technique directly ionizes and vaporizes the analyte from the condensed phase. MALDI is often used for the analysis of synthetic and natural polymers, proteins, and peptides. Analysis of compounds with molecular weights up to 200,000dalton is possible and this high mass limit is continually increasing. In MALDI, both desorption and ionization[17] is induced by a single laser pulse. The sample is prepared by mixing the analyte and a matrix compound chosen to absorb the laser wavelength. This is placed on a probe tip and dried. A vacuum lock is used to insert the probe into the source region of the mass spectrometer. A laser beam is then focused on this dried mixture and the energy from a laser pulse is absorbed by the matrix. This energy ejects analyte ions[18] from the surface so that a mass spectrum is acquired for each laser pulse. The mechanism for this process is not well understood and is the subject of much controversy in the literature.[19] This technique is more universal (works with more compounds) than other laser ionization techniques because the matrix absorbs the laser pulse. With other laser ionization techniques, the analyte must absorb at the laser wavelength. Typical MALDI spectra include the molecular ion; some multiply charged ions, and very few fragments.