A REVIEW ON MÖSSBAUER SPECTROSCOPY

Abstract
Over the past several years spectroscopy has become the preeminent technique for determining the structure of organic compounds. The study of recoilless nuclear resonant absorption or fluorescence is more commonly known as Mossbauer spectroscopy. From its first origins in 1957, it has grown rapidly to become one of the most important research methods in solid-state physics and chemistry. Mossbauer spectroscopy uses the nuclear properties to get information regarding the environment surrounding the nucleus. This technique is now valid application in diverse fields, such as solid state physics, metallurgy, chemistry and biochemistry. For example, it is possible to use this method for estimating the iron or tin content in ores, alloys and wasters in a non-destructive manner to concentration down to 0.03 percent in a short time of  the order of 10 minutes. The technique can also detect the relative percentage of  different charged states of the same atom, for example fe2+ and Fe3+ present in the material. This is somewhat difficult to get from any other technique.

The Mossbauer effect (ME) is based on the recoil-free-γ-rays resonance absorption phenomenan. Its unique feature is the production of highly monochromatic electromagnetic radiation so that it can be used for resolving minute energy perturbations. The application of ME arises from its ability to detect the small variations in the energy of interaction between the nucleus and extra-nuclear electrons which prior to the discovery of this effect were regarded hardly possible to observe.

Fundamental Principles of Mössbauer Spectroscopy
The Mössbauer Effect
Nuclei in atoms undergo a variety of energy level transitions, often associated with the emission or absorption of a gamma ray. These energy levels are influenced by their surrounding environment, both electronic and magnetic, which can change or split these energy levels. These changes in the energy levels can provide information about the atom's local environment within a system and ought to be observed using resonance-fluorescence. There are, however, two major obstacles in obtaining this information: the 'hyperfine' interactions between the nucleus and its environment are extremely small, and the recoil of the nucleus as the gamma-ray is emitted or absorbed prevents resonance.

In a free nucleus during emission or absorption of a gamma ray it recoils due to conservation of momentum, just like a gun recoils when firing a bullet, with a recoil energy ER. This recoil is shown in Fig1. The emitted gamma ray has ER less energy than the nuclear transition but to be resonantly absorbed it must be ERgreater than the transition energy due to the recoil of the absorbing nucleus. To achieve resonance the loss of the recoil energy must be overcome in some way.

As the atoms will be moving due to random thermal motion the gamma-ray energy has a spread of values ED caused by the Doppler effect. This produces a gamma-ray energy profile as shown in Fig2. To produce a resonant signal the two energies need to overlap and this is shown in the red-shaded area. This area is shown exaggerated as in reality it is extremely small, a millionth or less of the gamma-rays are in this region, and impractical as a technique. 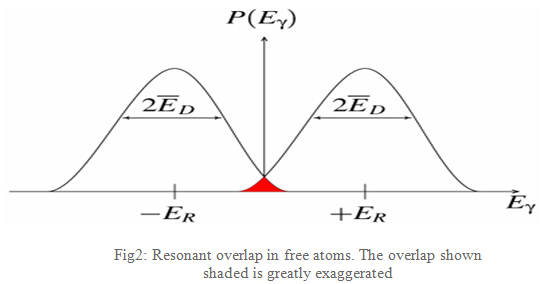 What Mössbauer discovered is that when the atoms are within a solid matrix the effective mass of the nucleus is very much greater. The recoiling mass is now effectively the mass of the whole system, making ER and ED very small. If the gamma-ray energy is small enough the recoil of the nucleus is too low to be transmitted as a phonon (vibration in the crystal lattice) and so the whole system recoils, making the recoil energy practically zero: a recoil-free event. In this situation, as shown in Fig3, if the emitting and absorbing nuclei are in a solid matrix the emitted and absorbed gamma-ray is the same energy: resonance!

If emitting and absorbing nuclei are in identical, cubic environments then the transition energies are identical and this produces a spectrum as shown in Fig4: a single absorption line.

The Mössbauer effect as generally applied to the study of minerals relies on the fact that 57Fe, which is a decay product of 57Co, is unstable. 57Fe decays by giving off a gamma ray (γ-ray), along with other types of energy. Figure 1 shows the nuclear decay scheme for 57Co → 57Fe and various backscattering processes for 57Fe that can follow resonant absorption of an incident gamma photon, modified from DeGrave et al. (2005) and Dyar et al. (2006). If a nucleus gives off radiation or any other form of energy (in this case, in the form of a γ-ray), the nucleus must recoil (or move) with an equal and opposite momentum to preserve its energy (E), in the same way that a gun (by analogy, the nucleus) recoils when a bullet (the γ-ray) is fired out of it. We des cribe this general case in terms of energy by saying that: 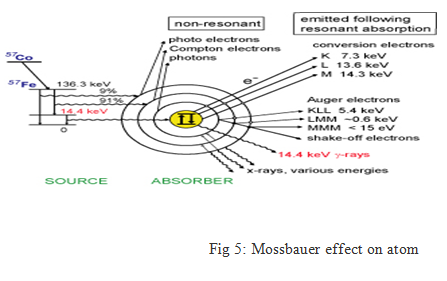