ABSTRACT
Cardiovascular (CV) diseases like atherosclerosis, angina pectoris, acute myocardial infarction, are a major cause of mortality in the whole world owing to the present day hectic lifestyle. In this review we will concentrate on the various novel drug delivery systems (DDS) like transdermal DDS, micelles, liposomes, nanoparticles (NPs), dendrimers, drug eluting stents (DES) and drug eluting balloons (DEB) that are being used over the years and in present day for the treatment of these diseases.

INTRODUCTION
Cardiovascular diseases pose a major threat to the lives of people in today’s hectic world. Not only adults but children are also getting affected by such diseases.  Many medications are commercially available for their treatment but the conventional tablets and capsules are unable to cope up with these situations. This augments the use of novel drug delivery systems providing targeted drug delivery and prolonged drug residence to the affected areas of the cardiovascular system. Novel drug delivery systems started with platform technology involving the introduction of transdermal patches, containing drug particles, were applied on skin. But with the necessity of targeted drug delivery, several nanoscale formulations like micelles, liposomes, nanoparticles, dendrimers, were developed and their applications in treatment of CV diseases were investigated.

The main advantage of nanoscale DDs is that they remain in the circulation for a long time avoiding renal excretion and hepatic first pass metabolism. They also exhibit enhanced permeability and retention effects. In this review we are going to discuss the various novel formulations and their application in controlling the CV diseases.

Novel drug delivery systems
Transdermal patch is a polymeric layered structure where the drug particles are dispersed uniformly and the patch is placed over the skin through which the drug diffuses into the bloodstream. Abrams (1989) studied the effect of transdermal patches of nitroglycerin in angina pectoris. Xingyan et al developed ethosome patches of Ligustrazine (4-methyl-pyrazine [tetramethylpyrazine, which is a traditional Chinese medicine for angina pectoris. These patches were found to decrease hemorheological indices of myocardial ischemia in rats, as well as protect acute ischemic myocardium and ischemia-reperfusion injured myocardium. 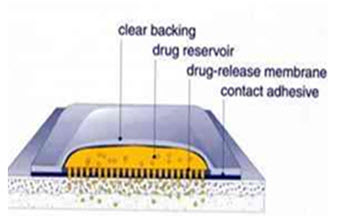 Micelles are composed of lipids and other ampiphilic artificial molecules. They self assemble in aqueous environment and can encompass hydrophobic drug particles to overcome solubility problems. 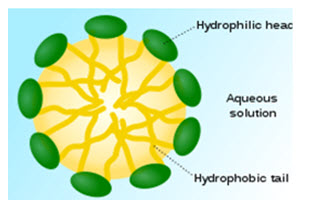 Liposomes comprise phospholipids and cholesterol to form bilayered structures, capable of incorporating both hydrophobic and hydrophilic drugs according to need. Liposomal drug delivery systems have many advantages in the formulations containing potent drugs to improve therapeutic efficacy which include biocompatibility, flexibility, controlled hydration, various administration routes and stabilization of the entrapped drug from hostile environments. However, liposomal drug delivery suffers from rapid clearance by the reticuloendothelial system if administered by parenteral injection into the bloodstream. The conjugation of polyethyleneglycol (PEG) and distearoyl phosphatidylethanolamine (DSPE) to the liposomes can reduce their recognition by the reticuloendothelial system. Recently, liposomes were modified by targeted ligands to decrease toxicity and improve deposition in the desired tissues. Takahoma et al (2009) studied the influence of liposomes on distribution and activity of ischemic/ reperfused myocardium and showed that PEGylated liposomal adenosine increased cardioprotective effects of adenosine against I/R injury and reduced unfavorable hemodynamic effcts.     Paulis et al (2012) studied the comparision between micellar and liposomal distribution in infarcted heart in mice. They concluded that liposomes could be used as proangiogenic drug delivery systems and micelles could be used for targeted delivery of cardioprotective therapeutics.   Tang et al. (2014) developed VEGF-encapsulated immunoliposomes targeting MI. By injecting the VEGF-immunoliposomes together with mesenchymal stem cells (MSCs) into a rat immediately following MI, the authors observed a significantly high reduction of cardiac function loss, together with an 80% increase in blood vessel density 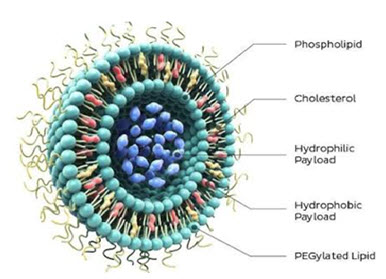 Dendrimers are repeatedly branched molecules with a high degree of molecular uniformity and low polydispersity. Drug particles can be incorporated in cavities of the core structure and foldings of the branches that form cages and channels. Latallo et al (1996) showed that Starbust dendrimers are nonimmunogenic and can regulate gene transfer and its expression both in in vivo and in vitro conditions.  Wang et al (2001) used both DNA/ dendrimer complexes and electroporation techniques to increase gene transfer in murine cardiac grafts.

Microbubbles are small spherical gas bubbles composed of phospholipids and biodegradable polymers that are approximately the size of red blood cells. They can encapsulate therapeutic agents via various techniques like coating or surface binding. They are used for  sonothrombolysis in patients with vascular thrombosis to dissolve blood clots and restore blood flow (Rosenschein 1997;Wu et al, 1998; Alexandrov, 2004; Wissgot et al, 2007). Microbubbles can be targeted to epitopes expressed on endothelial cells and thrombi by incorporating targeting ligands onto the surface of the microbubbles. 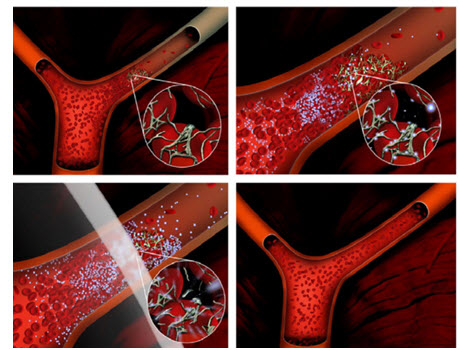 Figure5. The upper left image depicts a vascular occlusion caused by a clot that comprises fibrin, platelets and red blood cells. Microbubbles are administered (e.g. by IV injection) and accumulate in the clot. Ultrasound is applied (lower left image) and cavitates the microbubbles dissolving the blood clot and restoring flow (lower right).

Drug eluting stents are a major breakthrough in the arena of atherosclerotic vascular disease treatment (Perel et al, 2015). Metal stents have limited application due to the inflammatory response, thrombosis and restenosis. It was reported that drug-eluting stents (DES) could reduce the incidence of restenosis to less than 10% in clinical trials (Degertekin et al, 2003; Di Mario et al 2004; Stone et al, 2004). Although DES reduced the percentage of thrombosis and restenosis, drawbacks similar to those seen with metal stents appear after the drugs on the stent are completely released. In 2004 Virmani et al. found that the polymer coating on the stent surface caused an inflammatory response at the site of injury and lead to potential restenosis. To avoid that, biodegradable polymer stents were designed to inhibit restenosis before implantation. They are degraded in situ after the vessel is stabilized. Moreover, the vessel recovered its normal physiological vasomotor tone with the absence of a permanent rigid object fixed in the arterial wall. In 1997, Lincoff et al. found that stents composed of poly-L-lactide (PLLA) produced minimal inflammation and durable results in a porcine model. A limitation of polymer-based stents is their low mechanical rigidity. Bioresorbable stents are mainly constructed from polymer and metallic alloys. It was reported that a magnesium stent was absorbed within 3 weeks after implantation.
Wieneke et al found that porous aluminum oxide-coated stents encapsulated with drugs have exhibited inhibition to neointimal growth.  Although biodegradable polymeric stents are often used in the cardiology field, they still need improvement to meet clinical requirements. 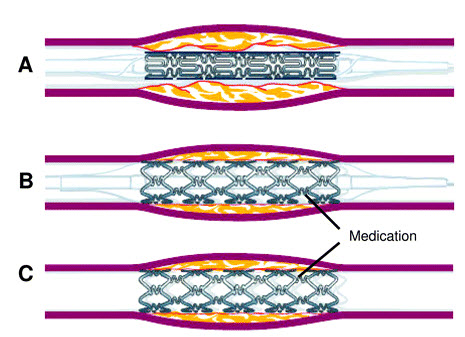 Figure 6. A, The stent is mounted on a balloon catheter and advanced to the diseased, narrowed portion of the heart artery. B, The balloon is inflated and the stent is expanded, which opens the narrowed section of the artery. C, The balloon is deflated and removed; the stent is embedded into the wall of the artery and stays in position. Medication coats drug-eluting stents and reduces the chance of renarrowing, or restenosis, of the blood vessel (Maisel et al, 2007).

Drug eluting balloons (DEBs) are an important alternative to DES, inhibiting coronary restenosis and subsequent revascularisation.  The paclitaxel drug-eluting balloon (DEB) posed to be an important device in this regard. It allows local release of a high-concentration antirestenotic drug, paclitaxel, into the coronary vessel without using a metal scaffold or durable polymers (Belkacemi et al, 2011; Woksman et al, 2009). Figure7 gives an idea of the various paclitaxel loaded drug eluting balloons that are used in treatment of coronary diseases. 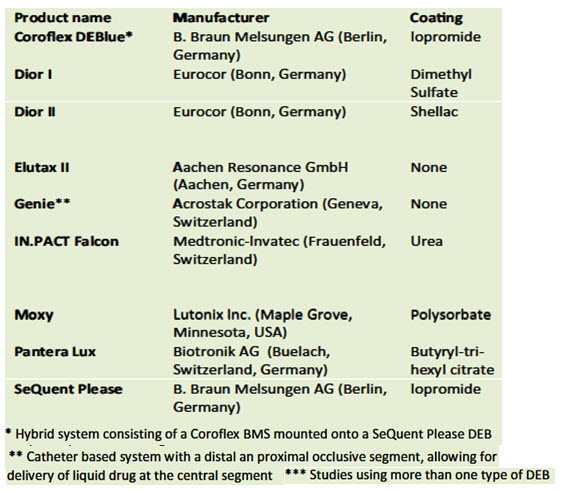 CONCLUSION
The above article states the different types of novel delivery systems used for the various cardiovascular diseases. According to the type of disease the delivery system is chosen.