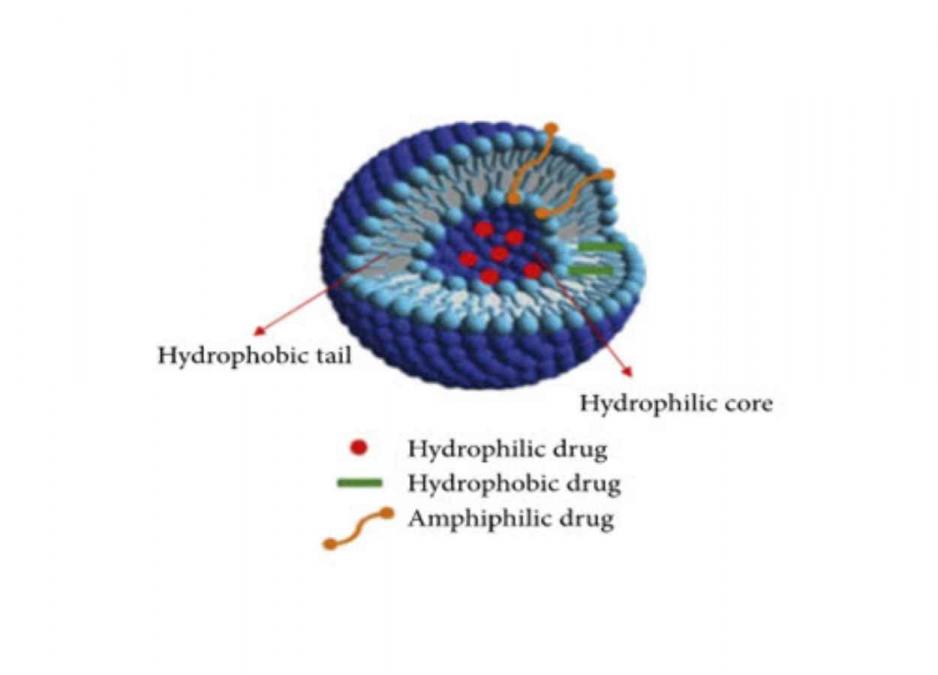 ABSTRACT : Treatment of infectious diseases and immunization has experienced a revolutionary move in recent years. Not only a large number of disease-specific biological have been developed, but also prominence has been made to effectively deliver these biological. Niosomes characterizes an emerging class of novel vesicular systems. Niosomes are self-assembled vesicles made up of primarily of synthetic surfactants and cholesterol. An all-embracing research carried over niosome as a drug carrier. Different types of drugs are enlisted and tried in niosome surfactant vesicles. Niosomes manifested to be a promising drug carrier and has potential to decrease the side effects of drugs and increased therapeutic effectiveness in various diseases. This article shows an overview of the techniques of preparation of niosome, types of niosomes, evaluation and their applications.

INTRODUCTION:
History :
Paul Ehrlich in 1909, started the era of development for target drug delivery, when he predicted the drug delivery mechanism that would target directly to diseased cell. There are number of drug carriers present which utilized to carry a drug at target organ\ tissue which include immunoglobulin, serum proteins, microspheres, liposome, synthetic polymer, niosomes etc.
Niosomes are novel drug delivery system, in which the hydrophilic drug is entrapped in the core cavity and hydrophobic drug present within the bilayer of niosomes in the non-polar region. Therefor both hydrophilic and hydrophobic drugs incorporated into niosomes.(1)
In this system medication is encapsulated in avesicle. The vesiclesare made up of bilayer nonionicsurface-active agents such as span 60 (2) and we can stabilize this by inclusion of cholesterol and small amount of anionic surfactant such as diacetyl phosphate. (3)
Due to addition of surfactant to niosomes, it enhances the effectiveness of drug, for example: Bleomycin, flurbiprofen etc. and increase bioavailability than the free drug. (3)
These type of niosomes are biodegradable, immunogenic and biocompatible in nature due to incorporation of surfactant and it stabilized the niosomes structure. (3)

ADVANTAGES : (4-5)
1. Niosomes increase the bioavailability of drug by shielding/ protect the drug from acidic and enzymatic degradation in GIT due to this it increases/ improves the bioavailability of drug.
2. Niosomes structure are hydrophilic, lipophilic and amphiphilic in nature due this we incorporate variety of drug moieties and used for many drugs.
3. Niosomes are osmotically active and stable in nature.
4. Skin permeation is also be increased by the use of niosomes.
5. The therapeutic efficiency of drug molecules is improved by slow down the clearance from the circulation.
6. Surfactant can be handled and store easily with no specific condition.
7. The vesicles behave as a depot and drug can be release in controlled manner.
8. Patience compliance is higher in oily dosage from. 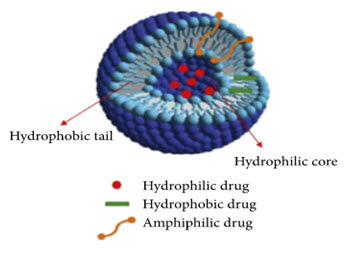 METHOD OF PREPARATION :
1. Ether injection method (8-9)
In this method slow injection of surfactant: cholesterol.In this we make the solution of surfactant dissolve in diethyl ether water maintain at 60 degreesCelsius.  Mixture of ether (20ml) is injected through 14-guage needle into aqueous solution of material. Then using rotary evaporator, ether solution is evaporated and formation of single layered vesicles after the evaporation of organic solvent.
2. Hand shaking method (10)
In this we mix all the mixing ingredient such as surfactant, cholesterol and charge inducer and dissolved in volatile solvent (chloroform, diethyl ether or methanol) in RBF. Now organic solvent is removed under a vacuum at room temperature 20 degree Celsius using rotary evaporator and formation of thin layer of solid mixture on the wall of flask. Then we rehydrated the film with aqueous phase at 0-60 degree Celsius with gentle agitation and formation of niosomes.
3. Sonication method (11)
In this method an aliquot mixture of drug solution in the buffer surfactant and cholesterol in 10 ml glass vial. Sonicated with titanium probe sonicator at 60 degrees Celsius for 3 minutes and formation of niosomes.
4. Micro-fluidization (1)
Unilamellar vesicles are prepare by recent technique which is known as micro fluidization. In is based on submerged jet principle in which in precisely defined micro channels within the interaction chamber two fluidized streams interact at ultra high velocities. The impact of thin liquid sheet along a common front is arranged such that the energy is supplied to the system remain within the area of niosomes formation and result is formation of uniformity, smaller size and better reproducibility of niosomes formed.
5. Multiple membrane extrusion method (12)
The mixture of surfactant, cholesterol and diacetyl phosphate in chloroform and due to this thin film formed by evaporation.
Now the day film is rehydrated by aqueous drug polycarbonate membrane, solution and then resultant suspension extruded through which are placed in series for upto 8 passages. This system is good for controlling niosomes size.
6. Reverse phase evaporation method (13)
In this method, in a same ratio (1:1) cholesterol and surfactant are dissolved in a mixture of ether and chloroform.
Drug which contains aqueous phase is added to this and formation of two phases which are sonicated at 4-5 degree Celsius. After that a clear gel is formed and which is further sonicated in this, we add phosphate buffer saline (PBS). After that under a low pressure the organic phase is removed at 40 degrees Celsius.
Then the viscous/ thick niosomes suspension is dilute with PBS and heated on water bath at 60 degrees Celsius for 10 minutes to yield niosomes.
7. The bubble method (14)
In this we placed the round bottom flask with three necks in water bath to control the temperature. Now in the first neck of RBF we placed water cool reflux and thermometer in second neck and into the third neck nitrogen supply. Cholesterol and surfactant are dissolved in the buffer (pH 7.4) at 70 degrees Celsius and then dispersion mixing for 15 second with high shear homogenizer. After the use of nitrogen gas is bubbled at 70 degrees Celsius.

EVALUTION :
1. Size (15-17)
Shape of niosomal vesicles is presumed to be spherical, and their mean diameter can be established by using laser light scattering method.[28] Also, diameter of these vesicles can be established by using different techniques like electron microscopy, molecular sieve chromatography, ultracentrifugation, photon correlation microscopy and optical microscopyand freeze fracture electron microscopy. Freeze thawing is use to increases the vesicle diameter of niosomes, which might be characterized to a fusion of vesicles during the cycle.
2. Bilayer formation (18-19)
Bilayer vesicle developed by assembly of non-ionic surfactants is determined by X-cross formation under light polarization microscopy.
3. Number of lamellae (18-19)
Nuclear magnetic resonance (NMR) spectroscopy, small angle X-ray scattering and electron microscopy these methods are used to determine the number of lamellae in niosomes.
4. Membrane rigidity (18-19)
Membrane rigidity can be calculated by means of mobility of fluorescence probe as a function of temperature.
5. Entrapment efficiency (20)
After preparing niosomal dispersion, unentrapped drug is isolated and the drug remained entrapped in niosomes is established by complete vesicle interruption using 50% n-propanol or 0.1% Triton X-100 and examine the resultant solution by relevant assay method for the drug. It can be characterized as:
Entrapment efficiency (EF) = (Amount entrapped / Total amount) × 100

APPLICATIONS:
Their action against various diseases niosomal drug delivery is potentially relevant to many pharmacological agents. Some of their therapeutic applications as follows:
1. Niosomes as a carrier to haemoglobin (21)
Niosomal suspension shows a visible spectrum which is superimposable onto that of free haemoglobin so it can be used as a carrier for haemoglobin. Vesicles are also permeable to oxygen and haemoglobin dissociation curve can be alter closely to non-encapsulated haemoglobin.
2. Neoplasia (22)
Doxorubicin the antibiotic, with broad spectrum which shows anti-tumour activity and a dose dependant irreversible cardio toxic effect. By its niosomal entrapment of the drug the half-life of the drug is increased and also prolonged its circulation and modified its metabolism.
3. Delivery of peptide drug (23)
Niosomal entrapped oral delivery of 9-desglycinamide, 8- arginine vasopressin was tested in an in-vitro intestinal loop model and reported that stability of peptide increased significantly.
4. Diagnostic imaging with niosomes (24)
It can be used as diagnostic agents. Conjugated niosomal formulation of gadobenate dimeglcemine with [N-palmitoyl glucosamine (NPG)],PEG 4400, and both PEG and NPG exhibit significantly better tumour targeting of an encapsulated paramagnetic agents evaluated with MRI.

CONCLUSION :
Niosomal drug delivery system is one of the examples of immense development in drug delivery technologies. The concept of drug integrates in the niosomes and to target the niosomes to the specific site is widely believe by researchers and academicians. They represent alternative vesicular systems with respect to liposomes also having many advantages over liposomes like cost, stability etc. Niosomes characterize a promising drug delivery technology and much research has to be inspired in this to juice out all the potential in this novel drug delivery system.