ABSTRACT
Diabetes Mellitus (DM) is a metabolic disorder which affects the people of almost all ethnic groups around the world severely. The effect of this disease involves lifelong suffering and has no permanent cure till now. Although different medications are available in the market but they are not accessible to every person due to their high cost, requirement of frequent administration and inability to alleviate diabetes permanently.  Plant derived compounds are being commonly used by many people, specifically by those in rural areas of many countries as ayurvedic source of antidiabetic agents and these are more preferable to everyone due to their less toxicity and side effects. These compounds work by variety of mechanisms which involve different interactions between effective compounds and target proteins in the metabolic pathway. Molecular docking study helps in determining the interaction between specific ligands and receptors to specify the best lead that fits the target.  This study has been designed to investigate the interactions with the aid of computational simulation tool between medicinal plant derived antidiabetic agents (Aegeline, Gallic Acid, Mangiferin and Quercetin) and a glucose metabolism regulatory target enzyme involved in type II diabetes, Glycogen Synthase Kinase-3 Beta (GSK3B) to assist potential antidiabetic drug search from natural source.

ADME/T test assists in determining various physicochemical and pharmacological properties of lead molecules like their extent of adsorption inside the cell, extent of metabolism, solubility, blood brain barrier permeability, mutagenicity, carcinogenicity   etc. which are the major prerequisites before marketing a drug. Quercetin performed well in overall experiment suggesting the best finding of the experiment.

However, further in vitro/in vivo study is required to find out the best remedy of diabetes.

INTRODUCTION
Diabetes Mellitus, Its Current Status and Treatment
Diabetes is a metabolic disease characterized by hyperglycemia resulting from defects in pancreatic insulin secretion, insulin action, or combination of both. The chronic diabetes is the major cause of dysfunction of organs like eyes, kidneys, nerves, heart, and blood vessels (ADA, 2014). The total number diabetic patient has increased drastically from 180 million in 1980 to 422 million in 2014. The prevalence of patient has increased doubly in past three decades from 4.7% to 8.5% globally. Recent studies have indicated that the occurrence of the disease is now approximately similar in both low income and high income countries (Roglic, 2016). There are different treatments available like- phototherapy, enzyme inhibition, antihypertensive therapy, recombinant insulin administration etc. depending on the type of complications involved in diabetes (Clark and Lee, 1995). Many medicinal plants have been reported to have antidiabetic activity in laboratory experiments (Tapsell et al. 2006; Shukia et al., 2002). Bangladesh is an agricultural country and many plant species are available here with a good portion among them is effective in healing diabetes. Plant species like Aegle marmelos, Terminalia bellirica, Psidium guajava and Mangifera indica are widely used as ayurvedic regimen by the people of rural areas in Bangladesh(Hasan and Sultana, 2018). Aegeline from Aegle marmelos (Narender et al.; 2007), Gallic acid from Terminalia bellirica (Sabu and Kuttan, 2009), Quercetin from Psidium guajava (Cheng et al., 2009) and Mangiferin from Mangifera indica (Apontes et al., 2014) have been shown to be effective in alleviating diabetes in earlier in vitro study. 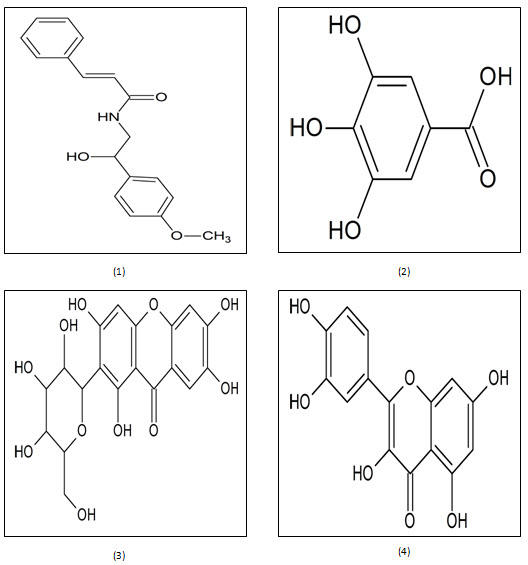 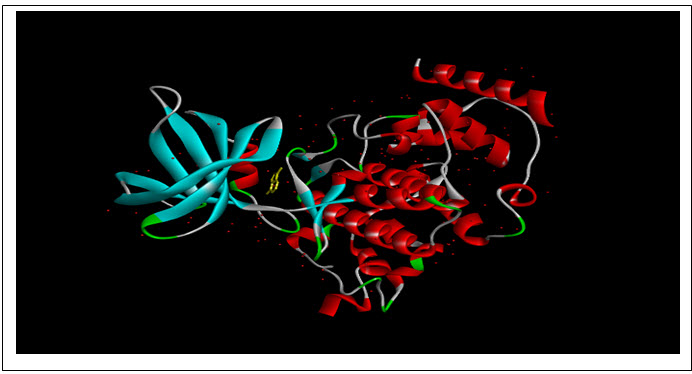 Figure 2: Structure of GSK3B ( PDB ID 1O9U) in its native ligand bound form. The ligand is represented in stick style (yellow) and the receptor is represented as ribbon style.

Role of GSK3B in Glucose Metabolism and Diabetes Development
Glycogen Synthase Kinase-3 Beta (GSK3B) is a multifunctional enzyme (47 kDA) which plays variety of significant roles in cellular signaling. It is usually a serine/threonine kinase which catalyzes the phosphorylation of many cellular mediators and enzymes, and itself becomes activated by tyrosine phosphorylation and inactivated by serine phosphoryltion respectively.  (Grimes and Jope; 2001). The phosphorylation carried out by activated GSK3B (Tyr phosphorylated state) is inhibitory for most of its target proteins (Martinez et al.; 2002). GSK3B remains activated when the body is in resting state and phosphorylates and inactivates one of its targets- Glycogen Synthase (GS)- an enzyme that synthesizes glycogen from blood glucose and keeps the glucose concentration lower inside bloodstream. But GSK3B becomes rapidly inactivated when the insulin level increases inside bloodstream and it loses its ability to phosphorylate GS leaving it to synthesize glycogen. The insulin dependent inactivation of GSK3B requires the activation of phosphatidylinositol 3-kinase and protein kinase B (PKB/Akt) (Cross et al., 1995; Sutherland et al., 1993). Dysregulation of GSK3B gives rise to type 2 diabetes which is characterized by the impairment in the insulin dependent glycogen synthesis. In such cases, GSK3B requires to be inhibited by exogeneous inhibitors to alleviate type 2 diabetes (Patel el al., 2008). 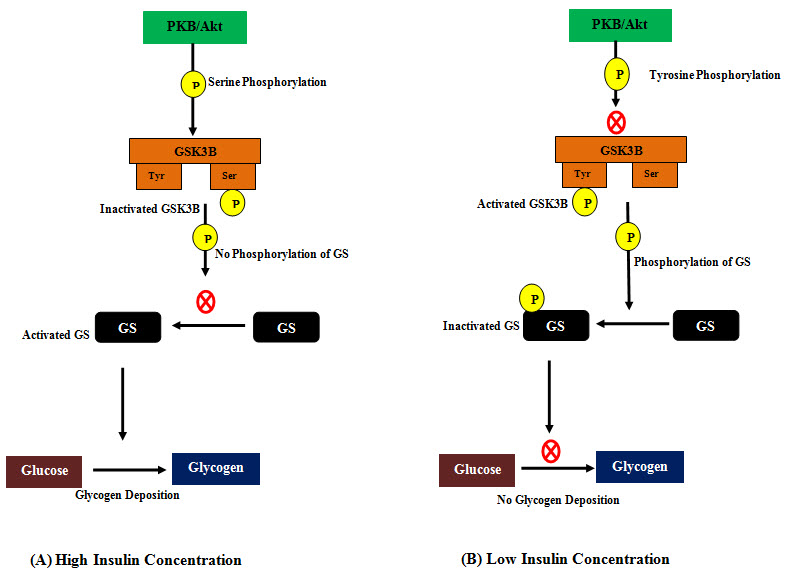 In Silico Docking and ADME/T
Molecular docking is an integral tool in structural biology and computer-assisted drug design which helps primarily in determining ligand-protein docking. The aim of molecular docking is to find out the best possible ligand which possesses the predominant binding mode with the 3D structure of a target protein (Morris and Lim-Wilby, 2008). The method works on the basis of specific algorithm which assigns binding energy for each of the ligand molecule from a large library and allows ranking of ligand molecules on the basis of binding energy which reflects its binding affinity. The lowest binding energy determines the most favorable binding (Ferreira et al., 2015).
In silico ADME/T test aids in determining the adsorption, distribution, metabolism, excretion and toxicology of the drug candidate inside the biological system. In addition to those physicochemical properties, ADME/T also focuses on some pharmacological properties like- blood brain barrier permeability, abdominal absorption, carcinogenicity, Cytochrome inhibitory property etc.  This process mimics in-vivo condition and assists the subsequent laboratory experiments (Wang and Skolnik, 2009; Dearden, 2007).

This study has been designed to perform molecular docking and  ADME/T of four isolated compounds (Arjunic acid, Gallic acid, Quercetin and Mangiferin) from medicinal plants of Bangladesh to identify one that fits well with GSK3B as potent inhibitor and also exhibits sound ADME/T properties.

Protein Preparation
Three dimentional structure of GSK3B (PDB id: 1O9U) was downloaded in PDB format from protein data bank (www.rcsb.org). The protein was then processed and refined utilizing the Protein Preparation Wizard in Maestro Schrödinger v11.8. Bond orders were assigned, hydrogens were added to heavy atoms. All the waters were deleted from the molecules and selenomethionines were converted to methionines. Finally, the structure was optimized and then minimized using built in default force field OPLS_2005. Minimization was performed setting the greatest substantial particle RMSD (root-mean-square-deviation) to 30 Å and any outstanding water under 3H-bonds to non water was again erased during the minimization step.

Ligand Preparation
The 3D conformations of Aegeline (PubChem CID: 15558419), Gallic acid (PubChem CID: 370), Mangiferin (PubChem CID: 5281647) and Quercetin (PubChem CID: 5280343) were downloaded from PubChem (www.pubchem.ncbi.nlm.nih.gov). These structures were then processed prepared using the LigPrep of Maestro Schrödinger. Minimized 3D structures of ligands were generated using Epik2.2 and within pH 7.0 +/- 2.0 in the suite. Minimization was again carried out using OPLS_2005 force field which generated 32 possible stereoisomers for each of the compounds.

Receptor Grid Generation
Grid usually restricts the active site to specific area of the receptor protein for the ligand to dock specifically within that area. In Glide, a grid was generated using default Van der Waals radius scaling factor 1.0 and charge cutoff 0.25 which was then subjected to OPLS_2005 force field for the minimized structure. A cubic box was generated around the active site (reference ligand active site) of GSK3B. Then the grid box volume was adjusted to 16×16×16 for docking to be carried out.

Glide Standard Precision (SP) Ligand Docking
SP adaptable glide docking was carried out using Glide in Maestro Schrödinger. The Van der Waals radius scaling factor and charge cutoff were set to 0.80 and 0.15 respectively for all the ligand molecules under study. Final score was assigned according to the pose of docked ligand within the active site of the receptor molecule (GSK3B). The docking result is summarized in Table 1. 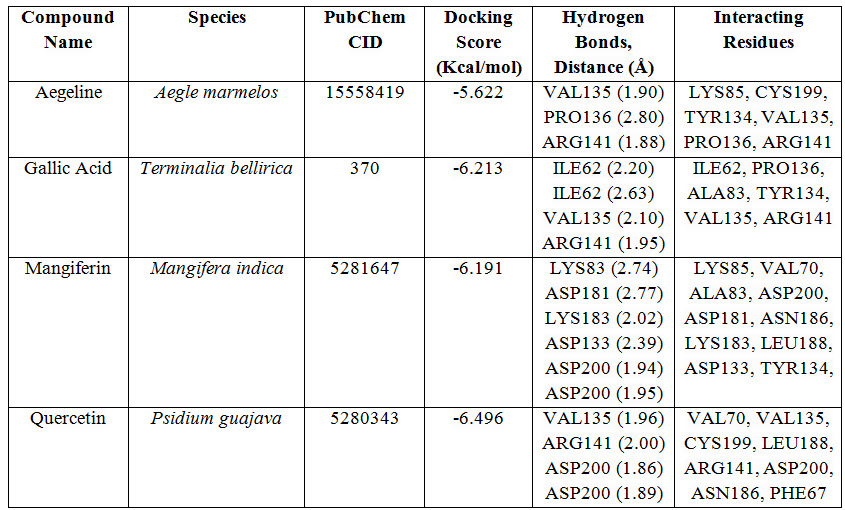