ABSTRACT:
The largest, longest study conducted on depression treatments, called the STAR*D trial, found that after people tried four antidepressants over the course of five years, about 70% of them were free of depressive symptoms. That’s a lot of trial and error to end at a place where 30% of patients don’t experience remission at all. The STAR*D trial ended in 2014, and despite a clear hole in the market–and a clear patient need–a golden age of new depression treatments still hasn’t arrived. The anesthetic ketamine could offer hope for people who don't have other depression treatment options. The most recent research on ketamine, as well as a statement from experts on its use published in April 2017, finds the drug works quickly, makes dramatic improvements in mood, and can work on people who haven’t gotten better with other depression treatments.

INTRODUCTION
Ketamine is an NMDA receptor antagonist with analgesic and dissociative anaesthetic properties that has been in use since 1965. Low or subanaesthetic doses of ketamine have been used effectively as adjuvant analgesia, usually with an opioid. Recent renewed interest in ketamine stems from reports of its efficacy in treatment of chronic pain states such as central pain, complex regional pain syndrome, fibromyalgia, and ischaemic and neuropathic pain. Ketamine may also reduce opioid requirements in opioid-tolerant patients. This opioid-sparing effect is observed in treatment of acute postoperative pain when ketamine is given intravenously or epidurally.(Kessler,2003) 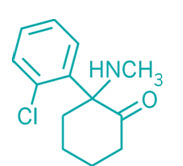 “Ketamine is currently in clinical trials for the treatment of major depressive disorder with imminent risk of suicide, but the mechanisms by which ketamine acts have been a puzzle to scientists. These findings suggest that the therapeutic actions of ketamine might relate, at least in part, to its ability to block burst firing in the lateral habenula.”(Rush et al.,2006)

Pharmacokinetics:
Previously, non-parenteral routes of administration of ketamine have not been favoured because of high first-pass metabolism. However, there are now reports of their use in treatment of chronic pain states. The parenteral route of administration is also limited in its application because of the narrow therapeutic window of ketamine, and the expenses associated with preparation and administration. Given the expanding clinical applications of ketamine in acute and chronic pain states, more research into oral and transmucosal routes of applications is warranted. The primary aims of the present study were to develop a simple lozenge formulation of ketamine that could be used in patients with neuropathic pain and to investigate its storage stability and bioavailability after oral or sublingual.(Rush et al.,2013)

Secondary aims were to examine the pharmacokinetics of ketamine and norketamine after oral or sublingual administration.(Krishnan and Nestler, 2007)

Uses of Ketamine in Depression:
Ketamine, most commonly known for its use as a recreational drug, has in recent years come to be thought of as the biggest breakthrough psychiatric treatment for severe depression in half a century(Manji et al., 2013). In as little as half an hour it has been shown to banish severe and even suicidal thoughts in patients with treatment-resistant depression, often after all other options have been exhausted, and the effects can last for weeks.

Unlike other antidepressants, which change brain chemical levels and can take months to have an effect, ketamine controls the transmission of electrical signals via nerve cells in rodents, the research adds. If the drug has the same effect in humans, it could treat the mental health disorder much faster than currently-available medications, according to the researchers. Ketamine is a Schedule III drug in the US and a class B in the UK. It can legally be prescribed by doctors as a general anaesthetic in humans and animals (Li et al.,. 1996).

Mechanism of Action:
A drug's mechanism of action is the way the drug works within the body to give the intended result. Ketamine's known mechanism of action involves being an antagonist for the NMDA receptors that are found in nerve cells (Trulas et al., 1990). These receptors are involved in processing central nervous system input. Ketamine blocks this sensory input. This action is what accounts for most of the effects seen from ketamine (Skolnick et al., 1996).

There may be additional mechanisms of action as well, most of which remain a mystery. In addition to the NMDA receptors, ketamine has actions on other receptors within the body, such as opioid receptors, and has effects on sodium and calcium ion movement across cell membranes (Diazgranados et al., 2010). Both of these actions may be related to its effectiveness for pain relief. It inhibits the re-uptake of serotonin, dopamine, and norepinephrine in the body, which may explain its antidepressant effects (Lerkin et al., 2011).

Side Effects of Ketamine:
This is the first systematic review of the safety of ketamine in the treatment of depression after single and repeated doses. We searched MEDLINE, PubMed, PsycINFO, and Cochrane Databases and identified 288 articles, 60 of which met the inclusion criteria. After acute dosing, psychiatric, psychotomimetic, cardiovascular, neurological, and other side-effects were more frequently reported after ketamine treatment than after placebo in patients with depression (Gracia, 2009). Our findings suggest a selective reporting bias with limited assessment of long-term use and safety and after repeated dosing, despite these being reported in other patient groups exposed to ketamine (e.g., those with chronic pain) and in recreational users (Rowland et al., 2005). We recommend large-scale clinical trials that include multiple doses of ketamine and long-term follow up to assess the safety of long-term regular use (Murrough et al., 2011).

Conclusions and Future Directions
Despites in drug discovery for MDD, there remains an unmet public health need to identify novel, rapidly acting agents for patients with treatment-resistant forms of depression. The observations of a rapid antidepressant effect of low-dose ketamine has generated considerable interest in the scientific and medical community alike, representing a proof-of-principle in targeting the NMDAR, and glutamate system more broadly, as a novel treatment approach in depression. Low-dose ketamine appears to enhance the strength of cortical synapses through NMDAR and AMPAR-dependent and neurotrophic mechanisms and may rapidly reverse prefrontal cortical deficits in depression at the neurocircuit level, leading to an amelioration of clinical symptoms. Models linking ketamine’s effects at the cellular, circuit and behavioral levels in depression, however, remain to be tested directly. For example, no study to date has investigated the impact of ketamine on functional neural markers in patients with MDD.