Conjugated bilirubin is excreted into the bile by the liver and stored in the gall bladder or transferred directly to the small intestine. Bilirubin is further broken down by bacteria in the intestine to urobilins, which contribute to the color of faeces. A small percentage of these compounds are reabsorbed and eventually appear in the urine as urobilinogen. The abnormal retention of bilirubin usually results in jaundice, a condition characterized by increased bilirubin in blood and deposition of a brownish yellow pigment in the skin, sclera and mucous membrane.

Principle: Among the various methods available for the quantitative estimation of proteins such as salt fractionation, electrophoresis, ultra centrifugation, etcKjeldahl’s method is the considered as the reference method. However this method is time consuming and cumbersome. Proteins bind with copper ions in the alkaline media of Biuret reagent to produce a purple colored complex whose absorbance is proportional to the protein concentration.

Histopathology:
Liver was collected after the rats were sacrificed in 10% formalin solution and utilized for the histopathological studies.

Liver was separated from all the groups and blotted free of blood and tissue fluids. They were fixed in bovine’s fluid (picric acid:Formalin:Aceticacid in the ratio of 75:52:5). After 24 hours the tissues were washed thoroughly in 70% alcohol and then dehydrated in ascending grades of alcohol (70,100%). Dehydration in absolute alcohol was followed by treatment of tissue with toluene: xylin (50:50) successively by 10%, 50%, 70%, 90% paraffin wax in toluene and finally to 100 % paraffin wax, at 60-62º C followed by embedding of tissue in wax.

5-15 micro-meter thick sections were serially cut in leitz microtome in horizontal plane and mounted on glass slides with the help of egg albumin in glycerin solution (50%v/v). The sections were deparaffinated in xylene and downgraded through 100, 90, 50 and 30% alcohol and then finally in water. They were then stained with 105 hematoxylin for 3-5 minutes and staining was intensified by running water. The hematoxylin stained section was stained with 10% eosin for two minutes and were then quickly passed through ascending grades of alcohol and finally treated with xylene followed by mounting in DPX.The sections were observed and desired area was photographed in anOlympus microscope. The sections were observed under 40X magnifications.

EFFECT ON HISTOPATHOLOGY OF LIVER
Histopathology 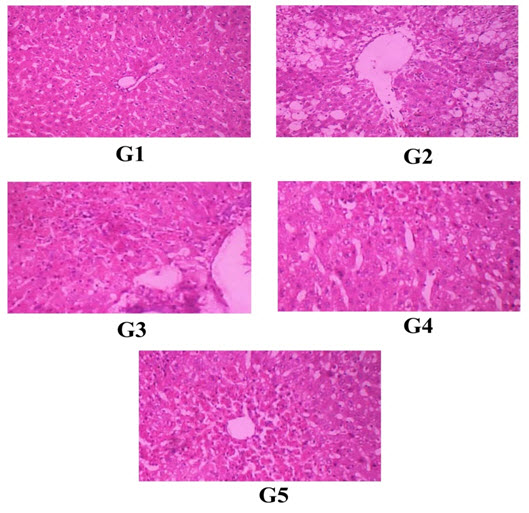 DISCUSSION
Several chemicals and drugs are involving in the development of toxicity. In the present research CCl4 ­was selected as chemical to induce hepatotoxicity in experimental animals. Carbon tetrachloride (CCl4) is effective hepatotoxin which is used in preclinical laboratory to induce liver damage in animals (Girish et al., 2009; Bagban et al., 2012). Cytochrome P450 an enzyme is act on CCl4 and converts CCl4 in to active trichloromethyl radical (CCl3.) which is further react with O2 to generate more free radicals. The generated free radical initiates the lipid peroxidation to cause cell necrosis and subsequent cell death (Manna et al., 2006; Shyamal et al., 2006).

In the present research administration of CCl4 significantly altered the serum marker enzymes of liver. Similar findings also observed by other investigators in this model (Rajesh and Latha, 2004; Bera et al., 2012; Mistry et al., 2013). During liver damage serum marker enzymes like SGPT, SGOT and ALP were released in to blood stream from hepatocytes (Shenoy et al., 2001). The elevated level of these enzymes along with total bilirubin and diminished level of total protein are indicative of cellular leakage and loss of functional integrity of cell membranes in liver (Rajesh and Latha, 2004; Fahmy et al., 2009). Increase in the normal upper limits in the measured serum transaminases of CCl4 administered group was a biochemical indication of liver injury. The biochemical parameters has been reverted significantly by the administration of glimipride in two different dose (10, 20 mg/kg).and the effect glimipride almost comparable to rats treated silymarin. So, the protective role glimipride of may be via stabilization of plasma membrane and protection of liver tissue from necrotic damage caused by CCl4.

Endogenous antioxidants like GSH, SOD and CAT plays a major role to fight against free radicals. Depletion of GSH, SOD and CAT in CCl4 treated rats is confirmed the loss of antioxidant mechanism in animals against oxidative stress. Loss of antioxidant enzymes may cause accumulation of highly reactive free radicals leading to further damage. CCl4 leads to generation of peroxy and superoxide radicals which are associated with the inactivation of these antioxidant enzymes (Bera et al., 2012). Oral administration of in glimipride two different dose (10 and 20 mg/kg) and silymarin significantly decreased the TBARS and enhanced the levels of GSH, SOD and CAT is indicating the protective role of  in glimipride against CCl4 induced oxidative stress. The protective mechanism of glimipride may be due to its putative antioxidant property.

CONCLUSION
The present findings observed in this study revealed that, glimipride is lignin possess significant antioxidant activity against CCl4 induced hepatotoxicity via antioxidant mechanism. However, further research is required to find out the other possible mechanism of hepatoprotection to confirm the as glimipride hepatoprotective molecule.