Growth In The Pharmaceuticals Market

The global pharma market was worth $934.8 billion in 2017 and will reach $1170 billion in 2021, growing at 5.8%, a report from The Business Research Company shows. This is an accelerated pace compared to 5.2% for the years before 2017, but is slower than the other two large healthcare segments, medical equipment and healthcare services. Healthcare as a whole is growing at over 7% year on year.

Affordability is related to income but also to drug prices. Consumer attitudes include willingness to use alternative therapies or distrust of taking drugs. Government (and insurance company) policies affect reimbursement and who the payer is. Other government policies determine regulation, which can be a significant barrier to the launch of new treatments. A major supply-side factor is availability of an appropriate treatment, which may be a matter of quantity, as in an epidemic, or of drug discovery and development.

PESTLE Analysis
Current and ongoing changes in political, economic, social, technological, legal and environmental factors are influencing growth in the healthcare market, where drugs play an important part. For instance, reduced taxes and lowered drug prices in the USA, GDP growth of over 6% in China and India, widespread population aging and sedentary lifestyles leading to increased chronic disease prevalence, Industrialized data services in R&D enabling the use of clinical trial data in trial simulations, lowered regulatory barriers for new drugs in the USA, and high urban pollution levels increasing the incidence of conditions like asthma are all boosting healthcare market growth. As a result, healthcare expenditure per capita is set to rise from its 2017 level of $1137 to $1427 by 2021. 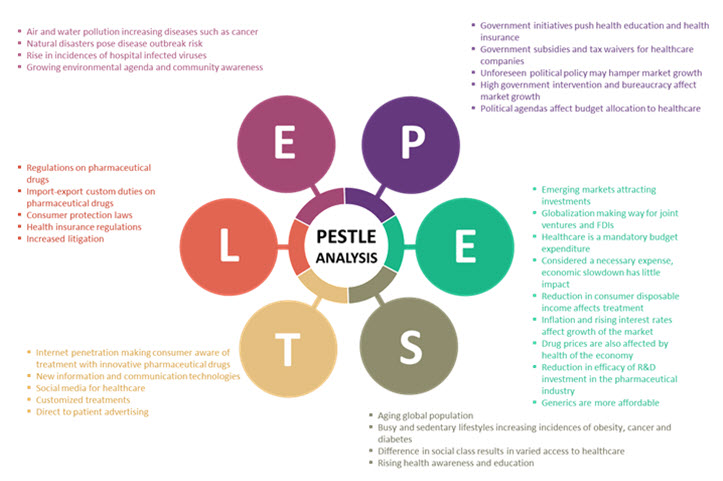 Drugs Market Restraints And Drivers
Part of the explanation for the relatively slow current growth of the pharma market is that the launch of major new products has slowed and that companies are restricting their R&D investment. For example, despite the huge potential for any effective and safe new drug for treating Alzheimer’s disease, Pfizer has ended its Alzheimer’s research program while AstraZeneca and GSK have cut back. High failure rates, the $2 billion average cost of developing a new drug, and falling returns on investment – down from 10.1% a year in 2010 to 3.2% in 2017 for the big pharma companies, according to Deloitte’s – are restraining the launch of high-priced new breakthrough drugs such as boosted the market in earlier years.

Most pharma growth now is coming instead from the increased size of the global aging population, which boosts demand for long-term treatments for chronic diseases, and better access to healthcare in emerging economies.

The Changing Geography of Pharma Markets
Growth over past decades means that North America and Western Europe still account for 56% of the global market, but Asia Pacific has overtaken Western Europe as the second largest region.  Growth in Asia Pacific is fuelled by increased affordability of drugs resulting from the launch of low-priced generics. Other factors that are positive for growth in Asia Pacific are the rise of gdp per capita in the region, government programs to support healthcare, and rapid urbanization which brings both doctors and pharmacies within easy reach of increasing proportions of growing populations. Pharma sales in Asia Pacific will grow at 8.4% a year to 2021.

The story is a similar one at the level of country. The USA, by itself worth 25% of the global total, is restraining global growth by rising at below 5% a year, while the much smaller markets of India and China are both achieving double that pace.

Pharma Segments
The largest pharma market globally is that for musculoskeletal drugs.  These are treatments for diseases such as rheumatoid- and osteo- arthritis, osteoporosis, carpal tunnel syndrome, tendonitis, rotator cuff tear, muscular dystrophy, myasthenia gravis, lupus erythematosus and others.  Major drugs in this segment include Piroxicam Glaxo, Dolonex, Felden, and Piroxicam Pfizer. The segment accounted for 14% of the global total in 2017. Cardiovascular, oncology and ant-infective drugs are the second third and fourth largest markets.

Drugs for treating metabolic disorders such as diabetes and diseases of the thyroid and pituitary glands will be the fastest-growing segment of the global pharma market to 2021. This segment will grow at 9% a year going forward, following recent growth of 11.6%, but it will remain in fifth place for market size.

Anti-diabetic drugs are the largest subsegment of the global pharmaceutical market, worth over $85 billion in 2017; second are the anti-virals and third come anti-hypertensives. Drugs for some of the less prevalent cancers – thyroid, skin and ovarian cancer – are the fastest-growing subsegments. This is in part because the US Federal Drug Administration has allowed a less rigorous regulatory procedure and lower endpoint benchmark for cancer drugs, so increasing the rate of innovation.

Competitive Landscape
Pharmaceutical drugs are subject to a large number of laws and regulations that deal with patenting, testing, safety, efficacy and marketing and affect the size and growth rates of the market. Together with the high R&D costs involved in creating new drug solutions, these can act as barriers to entry for small companies. However, pharmaceutical companies produce both generic and branded drugs. Generics, which are copies of patent-expired drugs, are opportunities for smaller entrants. They are taking an increasing share of the market, particularly in developing economies, where governments are encouraging their production in order to make lower-price treatments more widely available. 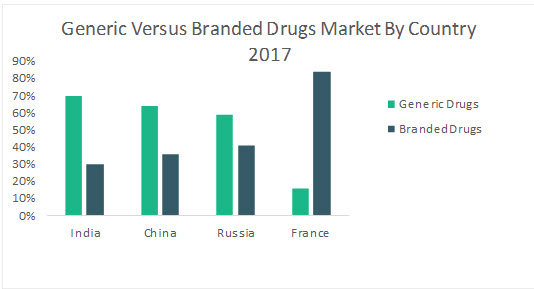 The leading competitors in the pharma market as a whole are Novartis, Sanofi, Pfizer, Hoffman-La Roche and Gilead. Together the top ten account for 30% of global sales, making the market moderately fragmented. Within individual segments, however, the share of these players varies: Hoffman-La Roche is by some way the leading competitor in the large oncology drugs market, but Sanofi leads in the cardiovascular and metabolic disorders segments. In markets where biologics have penetrated, the leading players are not in the top ten pharma manufacturers: Biogen, for instance, leads in the central nervous system segment, while Bristol-Myers Squibb and Eli Lilley have significant shares in oncology.

Deal activity in the healthcare industry has surged in recent years. Most mergers and acquisitions are aimed at boosting product portfolios and expanding the market reach of products and services. For example, in August 2014 Merck acquired a clinical-stage pharmaceutical company, Idenix Pharmaceuticals Inc., for nearly $4 billion. Through this acquisition Merck strengthened its product portfolio by adding Idenix’s potential hepatitis drugs.