FORMULATION AND EVALUATION OF FLUCONAZOLE GEL BY USING SYNTHETIC POLYMER

ABSTRACT
Fluconazole is an imidazole derivative and used for the treatment of local and systemic fungal infection. The oral use of Fluconazole is not much recomanded as it has many side effects. Thus these formulations are made for better patient compliance and to reduce the dose of drug and to avoid the side effects like liver damage and kidney damage. The gel was formulated by using the synthetic polymer like carbapol 934 and HPMC by changing the polymer ratio. Gel formulations were characterized for drug content, pH determination, viscosity measurement, in-vitro diffusion. Among the six formulations F2 was selected as the best formulation as its %CDR after four and half hour was 99.01%. The viscosity of the F2 formulation was within the limit. Efficient delivery of drug to skin application was found to be highly beneficial in localizing the drug to desired site in the skin and reduced side effects associated with conventional treatment.

INTRODUCTION [Demuria et al.,1993, Agrawal et al.,Rashmi,2008,  Loyd et al.]
Topical drug administration is localized drug delivery system anywhere in the body through ophthalmic, rectal, vaginal and skin as topical route. Skin is one of the most accessible organ of human body for topical administration and main route of topical drug delivery system. Number of medicated products is applied to the skin or mucous membrane that either enhances or restores a fundamental function of  a skin or pharmacologically alters an action in the underlined tissues. Such products are referred as topical or dermatological products.

Fluconazole is an antifungal drug; Fluconazole fights opportunistic infections in people with HIV, several fungal infection. Fluconazole is antifungal agent of triazole class and it is  new existing drug. It overcomes all side effects of the other fungal drugs like Ketoconazole, Amphotericin B, Clotrimazole and Miconazole. Even though it has some of side effects in the oral and IV dosage forms. Fluconazole remains one of the most frequent prescribed triazole because of its excellent bioavailability, tolerability and side effect profile. More than 80% of ingested drug is found in the circulation and 60 to 70 % is excreted in the urine. Only 10% of Fluconazole is protein bound.

Fluconazole also exhibits excellent tissue penetration.CSF levels are 70% of matched serum levels and levels reported in saliva, sputum and other sites are well within therapeutic ranges. The half-life is 27 to 34 hour in the presence of normal renal function allowing once daily dosing. In patients who have a reduced creatinine clearance the normal dose should be reduced by 50 %. Fluconazole serum levels are rarely necessary. Currently 50,100,150 and 200 mg  tablets are available and IV formulation exits in 200 or 400 mg doses.

PREPARATION OF GEL BASE [Patel et al.,2011, Golinkin,1979, Singh et al,2011]
The Fluconazole gel was prepared in 6 different batches that is F1 to F6 by changing the two polymers ratio carbapol 934 and HPMC while the other constant values were taken as mentioned in the formulae table 1.  Carbapol 934 (2,3,4,5,6 % w/w) and purified water were taken in a beaker and allowed to soak for 24 hour. To this required amount of drug 2gm) was dispersed in water and then carbapol 934 was neutralized with sufficient quantity of NaOH. Glycerin as moistening agent, methyl paraben and propyl paraben as preservatives were added slowly with continuous gently stirring until the homogenous gel was formed

Determination of pH [Denath et al.,2009,Prorost,1986]
Weighed 50 gm of each gel formulation were transferred in 10ml of beaker and measure it by using the digital pH meter. pH of the topical gel formulation should be between 3-9 to treat the skin infections.

Viscosity Estimation [Niyazbasha and Prakasam,2011]
The T-bar spindle (T95) was used for determining the viscosity of the gels. The factors like temperature, pressure and sample size etc which affect the viscosity was maintained during the process. The helipath T-bar spindle was moved up and down giving viscosities at number of points along the path.
The torque reading was always greater than 10 %. The average of three readings taken in one minute was noted as the viscosity of gels.

In-vitro diffusion study [Demuria et al.,1993]
The Abdominal skin of Albino mice weighing 20-25 gm of 8-10 week old was shaved using hand razor and clean the skin with hot water cotton swab. 5 gm of gel was applied uniformely to skin. The skin was mounted between the compartments of the Frantz diffusion cell with stratum corneum facing the donor compartments. Reservoir compartment was filled with 100ml phosphate buffer of pH 6.8.

RESULTS
Standard gragh of Fluconazole
The method for the estimation for the drug Fluconazole showed maximum absorption at wavelength 260 nm in alcohol and all obtained values given in the table 2. Standard curve obeyed Beer’s law at given concentration of 10 μg/ml and when subjected to regression analysis, the value of regression coefficient was found to be 0.997 which showed linear relationship between concentration and absorbance.

Drug Content
After various formulation batches of Fluconazole gel the drug content of the formulated gel was estimated by UV Spectrtophotometer at wavelength 260 nm in alcohol. The results were given in the table 4. The minimum drug content was found in F4 batch (97.47 %) and maximum drug content found  in the F2 batch (99.84 %).

IN-VITRO DIFFUSION STUDY [Gupta et al.,2010]
The release of Fluconazole from the gel was varied according to concentration of polymer. It has been concluded that, if we increase the concentration of polymer, the diffusion of drug through the skin also decreases. The amount of drug diffused from the formulation F2 was 99.01 in 4 ½ h which was higher among all the gel formulation. Resultant values obtained from this study are given in the table7.

Table 1: Formula for the gel 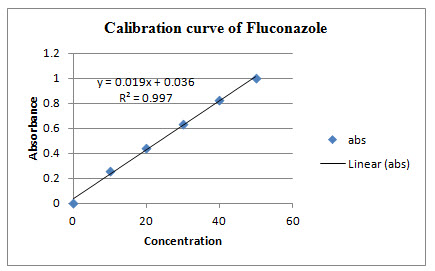 CONCLUSION
1) Fluconazole is an imidazole derivative, used for the topical as well as systemic fungal infections. The bioavailability of Fluconazole is 90%. In the present study, an attempt was made to formulate topical gel of Fluconazole for efficient delivery of drug across the skin.
2) A suitable method of analysis of drug is UV spectrophotometry. Fluconazole showed maximum absorption at a wavelength of 260 nm in alcohol. The value of correlation coefficient was found to be r2 = 0.997, which showed linear relationship between concentrations and absorbance. Thus, it can be concluded that, beer’s law was obeyed.
3) Various formulations (F1, F2, F3, F4, F5 and F6) were developed by using suitable polymer (carbopol 934, HPMC) and penetration enhancer.
4) Developed formulation of Fluconazole were evaluated for the physicochemical parameters such as percentage yield, drug content, pH determination, viscosity, in-vitro diffusion.
5) From among all the developed formulations, F2 shows better drug diffusion for a period of 4 ½ h, did not produced skin irritation, good Rheological properties and good results of antifungal studies. Therefore, it was selected as the best formulation.