ABSTRACT:
All active pharmaceutical ingredients are having good therapeutic activity and show poor oral bioavailability , because of poor solubility .The present study is to investigate to improve the solubility of Felodipine using different carriers and different methods of preparation of techniques to identify that which carrier and suitable method of preparation. All formulation are evaluated for hardness, friability, drug content uniformity, and in vitro dissolution studies. Among all the formulations three formulation shows good drug release and the formulation with direct compression method shows good drug release compared to other formulation among all the formulation Polyvinylpyrrolidone (PVP) with direct compression is considered as ideal formulation from the study.

METHOD OF PREPARATION OF FELODIPINE TABLETS
Tablets prepared by Dry granulation method
Granulation is a process in which powder particles are made to adhere to each other, resulting in larger, multi-particle entities, so called granules. If such a process is performed without adding liquids, this is called dry granulation. In dry granulation, the powder blend is compacted by applying a force onto the powder, which in general causes a considerable size enlargement. Principally there are two methods to obtain the compacts when using dry granulation: slugging and roller compaction (Valleri M. et al 2004; 30(5): 525- 534). Roller Compaction is used to prepare granules. A Roller compactor generally consist of three major units: A feeding system, which conveys the powder to the compaction area between the rolls .A compaction unit, where powder is compacted between two counter rotating rolls to a ribbon by applying a force .A size reduction unit, for milling the ribbons to the desired particle size. In this method starch, sodium starch Glycolate, Avicel PH 102 used as a carriers for Felodipine.

In direct compression method, all ingredients as shown in Table 1 were mixed in geometrical order and compressed by using round flat punches on rotary tableting machine. In direct compression Avicel PH 102, Polyvinylpyrrolidone (PVP), Polyethylene glycol (PEG 6000), are used as a carrier for Felodipine tablets for enhancing the solubility of tablets (Chowdary KPR, Rao SS. 2002).

Tablets prepared by wet granulation
Avicel PH 102, Polyvinylpyrrolidone (PVP), Polyethylene glycol (PEG 6000), are used as a carrier for wet granulation. Starch solution used as binder for preparation (British Pharmacopoeia 1993). Granules are prepared by mixing drug, carrier, lactose and binder solution to get coherent mass ,granules are passed through the sieve number 44.talc and magnesium stearate starch powder are added in the final step. 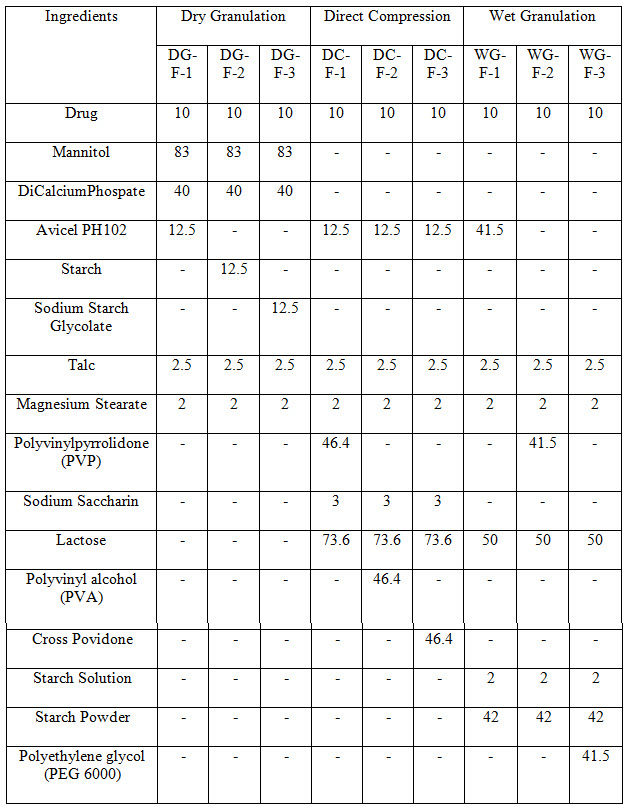 CALIBRATION CURVE OF FELODIPINE
Accurately weighed 10 mg of powdered drug was transferred to 100 mL volumetric flask. To this about 20 mL of ethanol was added and contents of the flask were shaken to effect the solution (United States Pharmacopoeia2004). Finally volume in the flask was made up to the mark by using ethanol (R. M. Silverstein, et al 1981). 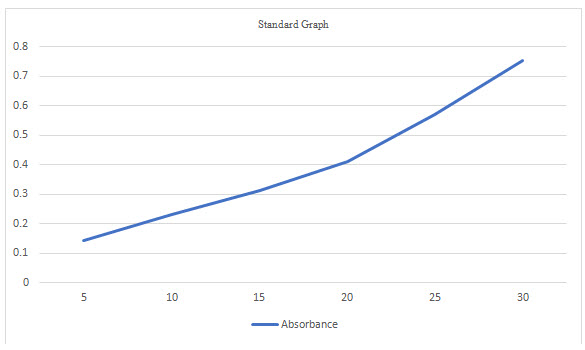 EVALUTION PARAMETERS
Tablet thickness and weight variation
Vernier caliper was used to determine tablet thickness. Tablet was placed in between two arms of the caliper. Average of three values was calculated (J. P. Blitz). Weight variation is determined by taking twenty tablets and weighing them on electronic weighing balance to determine the average weight. At the end, the individual weight was compared with average weight. (Seager H. J. Pharm. Pharmacol. 1998; 50: 375-382).

Friability
Friability of tablets was determined by using Roche Friabilator (Pharma Test, Germany). Twenty tablets were weighed and placed in the drum of the Friabilator and speed was adjusted at 25 rpm (Chang RK, et al Pharm Technol 2000; 24:52‐8.). The tablets were allowed to revolve, fall from height of six inches for 4 min. Then tablets were de-dusted using muslin cloth and re-weighed.

Tablet disintegration
Tablet disintegration apparatus was used. Six tablets were taken and placed individually in tubes and properly covered. The temperature of medium was maintained at 37±2° and timely noted by thermometer (Takao M, 1996). The time taken by the tablet to disintegrate completely was noted. 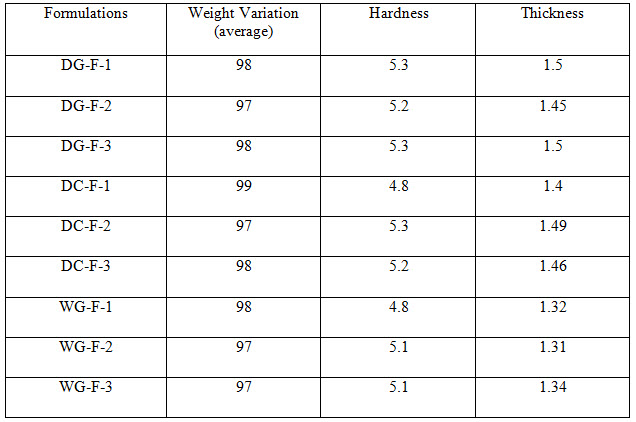 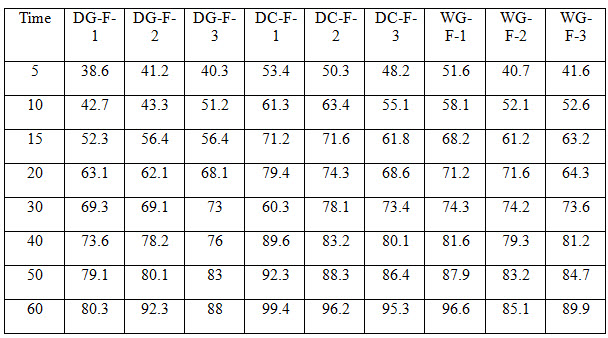 Table 4 Dissolution Profile for all Formulations 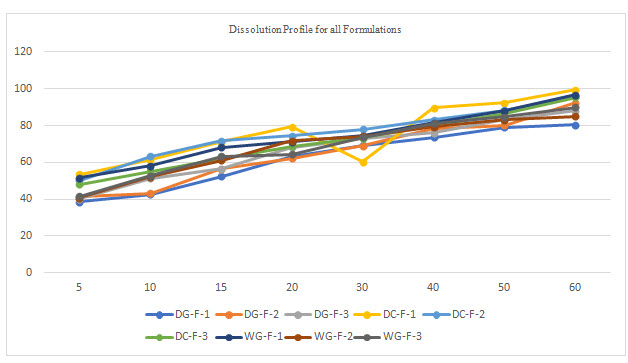 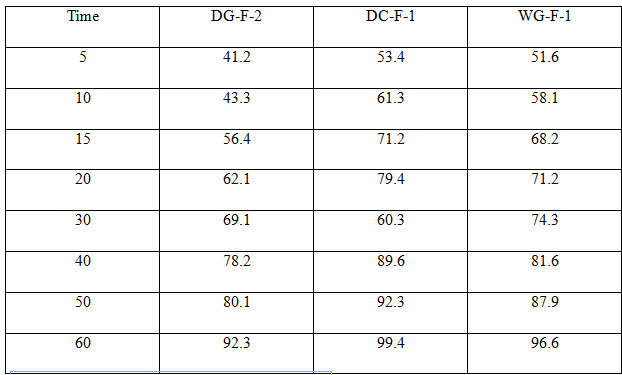 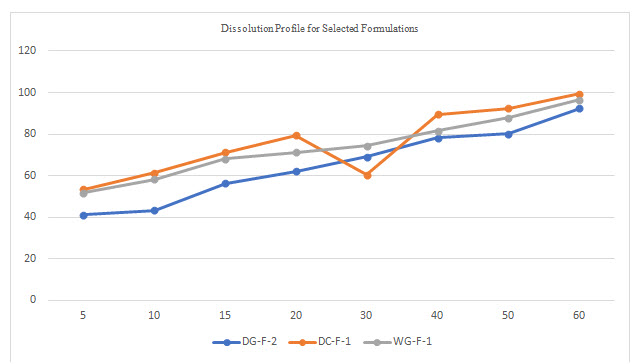 Dissolution study
Dissolution studies were performed on USP type-II apparatus. The speed of apparatus was set at 50 rpm.900ml of phosphate buffer solution of pH 6.8 was taken as dissolution medium in each vessel of the apparatus ( Zhao N, Augsburger LL. Et al. Article 79) Dissolution vessels and temperature of medium was kept at 37±0.5°. The dissolution sample was taken from each vessel at regular intervals and was replaced by equal quantity of freshly prepared media (Sunada H et al .2002). Absorbance was measured by using UV/Vis spectrophotometer.