Abstract
Due to increasing resistance to existing synthetic antimicrobial agents, herbal drugs are being looked as importance source for treating various ailments related to skin infections and also for the discovery of new antimicrobial molecules for their synthesis. Cassia tora is a well known plant possessing wide range of pharmacological activities. It has been used in India as folk remedy in the form of decoctions and infusions to treat bacterial and fungal infections and also claimed to be effective against variety of skin conditions like psoriasis, acne, wounds etc. Although this plant, particularly its seeds have been reported to have antimicrobial activities, but no targeted and specific study has been reported. The present investigation was carried out to study this unexplored area of this drug. As the seeds of C. tora possess good antimicrobial activity, it was thought worked to scientifically explore its potential on microorganisms effecting human beings especially on skin, so that safe and effective herbal treatment can be developed for the same.

Introduction
Traditional medicines hold a great promise as source of easily available effective therapy for skin diseases. Cassia tora Linn.(Family: Leguminosae), is a common Indian herb having various medicinal properties for the treatment of many disease. According to Ayurveda the leaves and seeds of C.tora are acrid, laxative, antiperiodic, antihelmintic, ophthalmic, liver and cardiotonic and expectorant and useful in leprosy, ringworm, flatulence, colic, dyspepsia, constipation, cough, bronchitis and cardiac disorders. It has been reported for their usefulness in traditional system of medicines for treating skin diseases like psoriasis, leprosy etc (Zahra et al, 2000; Harrison and Dorothy, 2003). C.tora is used as natural pesticides. Antimicrobial activity of chrysophanic acid-9-anthrone from C. tora has been reported. (Kim et al, 2004). Humans are natural hosts for many bacterial species that colonize the skin as normal flora. Staphylococcus aureus and Streptococcus pyogenes are infrequent resident flora, accounting for a wide variety of bacterial pyrodermas, conditions like impetigo, ecthyma, erysipelas, cellulitis, psoriasis, atopic dermatitis, Erythroderma and other skin infections (Tomi et al, 2005). As C.tora has been reported to possess antimicrobial activity causing skin infections, the present investigation was carried out to evaluate the antimicrobial activity of Cassia tora, against Staphylococcus aureus, Escherichia coli, Aspergilus niger and Microsporum gypseum.

Chemicals and Reagents: All the solvents used were of AR grade from Rankem.

Isolation of Chrysophanic acid: Isolation of chrysophanic acid was done by column chromatography of benzene extract. The column was washed three times with acetone and packed with activated silica gel (100-120 mesh). The elution was started with the chloroform solvent system. Since most of the components were yellowish- brown coloured, it was easy to govern the elution pattern. Each fraction collected separately and concentrated by evaporation. There were around twelve fractions and each fraction was compared with its adjacent fractions by TLC.  Those fractions given similar pattern combined together and each fraction qualitatively analyzed for the particular class of compound. Then after, obtained isolated compound was identified by various methods as apperance, melting point, solibilty profile, Modified Borntrager’s test and UV-visible spectra range etc.

Phytochemical evaluation: Phytochemical examinations were carried out for the extract as per the standard methods. (Trease and Evans, 1987). (Table-2)

The benzene extract and test ointment that exhibited considerable activity (>6 mm) were separately dispensed separately in a series of five test tubes containing sterile nutrient broth to get a final concentration (25, 50, 75, 100 and 125 mg/mL) of extracts and a final tube with the solvent control. An aliquot of 0.5 mL of the respective bacterial suspension was inoculated into each tube and mixed well. All the tubes were incubated at 370C for 24 hour. The lowest concentration that did not permit any visible growth when compared with the control was considered as the minimum inhibitory concentration (MIC). Aliquots of culture media from all the test tubes that did not show any visible growth were inoculated on nutrient agar, incubated at 370C for 24 hour. The minimum bacteriocidal concentration was considered as the lowest concentration that could not produce a single bacterial colony.

Determination of zone of inhibition: Preparation of the samples: 200 mgs of benzene extract of Cassia tora, prepared test ointment and standard ointment (Fusidic acid ointment) screened for their antimicrobial activity. All the samples were dissolved in 10 ml of DMSO to get the concentration of 20 mg/ml. Evaluation of the activity was carried out by cup-plate technique using nutrient agar medium and the antibacterial and antifungal activity was measured in terms of zone of inhibition.

Preparation of Inoculums: Suspension of organism was prepared as per McFarland nephelometer standard (Ellen and Sydney 1990). A 24 hour old culture was used for the preparation of bacterial and fungal suspension. Suspension of organism was made in a sterile isotonic solution of sodium chloride (0.9% w/v) and the turbidity was adjusted such that it contained approximately 1.5X 10 8 cells/ml. It was obtained by adjusting the optical density of the bacterial and fungal suspension to that of a solution of 0.05ml of 1.175% of barium chloride and 9.95 ml of 1% sulphuric acid.

Antibacterial Assay: Antibacterial assay was carried out on Mueller Hinton Agar. The composition of the medium is given below.

Procedure: The medium was prepared by dissolving the ingredients in distilled water and subjected to sterilization in an autoclave at1210C for 15 minutes. The Petri plates were washed thoroughly and sterilized in hot air oven at 1600C for 1 ½ hours. 30 ml of sterile molten agar medium seeded by organisms, in semi hot conditions (400C) was poured aseptically in sterile petri plate and allowed to solidify at room temperature. Bores were made on the medium using sterile stainless steel borer and 0.1 ml of the samples were added to respective bore of Fusidic acid ointment at a concentration of 100 μg / ml was taken as standard. The petri plates seeded with organisms, containing extracts and the standard were kept in refrigerator at 40C for 1 hour to facilitate the diffusion of the extracts and the standard in to the media. After diffusion the petri plates were incubated at 37 ± 10C for 24 hours in a incubator and zone of inhibition was observed and measured using a scale. The results of the antibacterial and antifungal activity of samples are tabulated. (Table 3 and 4; Fig. 1 and 2) (Photograph 1)

Result and discussion:
In the Ayurvedic system of medicine, C.tora has great reputation in all kinds of skin infections. Seeds  of C.tora constitute a valuable remedy in skin diseases, chiefly for ringworm and itch. The benzene extraction yield 6.5% extract.

Cassia tora is well known traditional medicine for its effectiveness against wide range of diseases including skin infections due to the advantage of the diversity of secondary metabolites responsible for their antimicrobial activity.

Qualitative phytochemical analysis of C.tora seeds has mainly shown the presence of anthraquinones.

It is clearly evident that prepared test ointment showed no irritancy, good extrudability, homogeneity and spreadability. The pH of ointment was suited to skin secretions. The physico-chemical characteristics and percent assay of drug in the formulation was found to be satisfactory. Ointment formulation was stable and had good physical properties.

in vitro study, the extract and prepared test ointment was analyzed for antimicrobial property against two bacterial species, Staphylococcus aureus and Escherichia coli and two fungal species, Aspergilus niger and Microsporum gypseum.  The observations were compared with that of standard antibiotic by measuring the diameter of clearance zone of inhibition. The benzene extract was found most potent (13 mm) against Staphylococcus aureus, drug in ointment (test) showed 18 mm, while Fucidin ointment (standard drug) showed a clearance zone of 23 mm. The minimum inhibitory concentration and bacteriocidal concentration of the extract was 75 mg/mL and 125 mg/mL respectively, while for drug in ointment the minimum inhibitory concentration and bacteriocidal concentration 50 mg/mL and 100 mg/mL respectively. In case of antifungal study benzene extract was found most effective against A. niger (13 mm), drug in ointment showed 18 mm, while the activity of Fucidin ointment against these fungi was 22 mm. 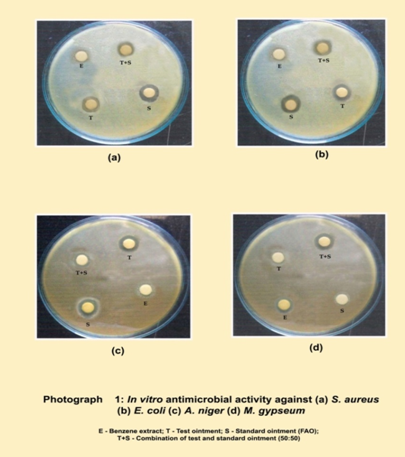