ABSTRACT
Epilepsy is a chronic brain disorder characterized by tendency to recurrent seizures or fits. The seizures can leads to loss of consciousness, disturbance of movement, muscle spasms, autonomic and mental functions. Epilepsy is developed because of imbalance in nerve signalling chemical called neurotransmitters. During epilepsy, the level of excitatory neurotransmitter glutamate increases and the level of inhibitory neurotransmitter GABA decrease. These lead to abnormal signalling in brain causes epilepsy. Primary diagnosis of epilepsy includes eye–witness and family history. Electroencephalograph (EEG) is the cornerstone for diagnosis of epilepsy and measures the brain wave activity. Neuroimaging like computed tomography (CT) scan, magnetic resonance imaging (MRI) and positron emission tomography (PET) techniques are used to diagnose abnormalities in structure and function of brain. Video recording is also useful for the monitoring of epileptic events. The most common approach of treatment is to prescribe antiepileptic drugs (AEDs). Three generations of AEDs including phenytoin, valproate, carbamazapine, lamotrigine, Oxcarbazepine, Primidone,Phenobarbitone,Gabapentin, Topiramate, Levetiracetam, Felbamate, Rufinamide, Zonisamide, Tiagabinand Vigabatrin etc. are prescribed. These AEDs have some teratogenic effects on  pragnent woman and lactating mother; need precautions. Instead of  pharmacological approaches, Non-pharmacological approaches also used for the treatment of epileptic seizures like ketogenic diet, atkins diet, yoga etc. Thr purpose of this review is to update the current knowledge on epilepsy classification, diagnostics, approaches of treatment, pathophysiology, mechanism of epileptogenesis and teratogenic effects.

OBJECTIVE
As per WHO epilepsy is one of the most common serious brain disorders that affects not only the individual, but also has impact on family and the society in general. Epilepsy affects all the ages, races, sex, education, economic status and social classes across all geographical boundaries. Hence need to aware about epilepsy.

INTRODUCTION
Epilepsy is a brain disorder that affects at least 12 millions people in India and 65 millions of people worldwide[1]. As per WHO epilepsy is one of the most common serious brain disorders that affects not only the individual, but also has impact on family and the society in general. Epilepsy affects all the ages, races, sex, education, economic status and social classes across all geographical boundaries.It is expressed by unpredictable recurrent seizures or fits, which can leads to loss of consciousness, disturbance of movement, muscle spasms, autonomic and mental functions. During the seizure, neurons may fire 500 times faster than normal neurons. Mechanism of epilepsy is believe to be imbalance in neurotransmitter release i.e. abnormally increase the level of excitatory neurotransmitter glutamate while decrease in inhibitory neurotransmitter GABA. Several types of epilepsy have now been linked to defective ion channels that control the flow of ions and regulate neuron signalling. Diagnosis includes eye–witness, family history, electroencephalograph (EEG), computed tomography (CT), magnetic resonance imaging (MRI), positron emission tomography (PET), single photon emission computed tomography (SPECT), and magnetic resonance spectroscopy (MRS) techniques. Most common approach to treating epilepsy is to prescribe antiepileptic drugs (AEDs). There are various older and newer AEDs like Gabapentin, Topiramate, Phenytoin, Valproate, Carbamazapine, Lamotrigine, Oxcarbazepine, Levetiracetam, Felbamate, Rufinamide, Zonisamide, Tiagabin, Vigabatrin, Primidoneand Phenobarbitone are used for the treatment of epilepsy. These drugs are use for symptomatic treatment of epilepsy that stops seizure but not cure the epilepsy. About 75—80% of epileptic patients respond to conventional antiepileptic drugs but in 20—25% cases therapeutic failures and refractoriness occur[2].In society there are many myths about epilepsy like (a) epilepsy is because of possession by evil sprit and hence sorcery is the treatment(b) epilepsy is mental illness (c) people with epilepsy are below normal in their intelligence (d) marriage cure epilepsy (e) seizure can be stopped by giving a key in the hand or making a person to smell onion or shoe. But this is not the fact; epilepsy is treated by giving antiepileptic drugs.

PATHOPHYSIOLOGY OF EPILEPSY [3,4]
The first visible symptom of epilepsy is repeated seizure; generated due to malfunction of ion channels on synapses during neurotransmission. Primarily seizures are as result of hypoactivity of inhibitory neurotransmitter or hyperactivity of excitatory neurotransmitter. A persistent increase of neuronal hyperactivity or excitation is a single characteristic in most of the epileptic syndrome. The anomalous behaviour of neurons is associated with causative factors which are mainly categorized into two groups: Chemical Imbalance and Brain Injuries. Chemical imbalance includes low blood level of sodium, calcium, sugar and oxygen. Brain injuries include intercranial haemorrhage, brain oxygen deficiency, infection, trauma, tumour meningitis, stroke, and other neurological disorders. Other factors such as Genetic Factors and inflammation factors like Cytokines & tumour necrosis factor (TNF) are also involved. Neurological firing during seizure and pathophysiology of epilepsy are represented in fig 1. Role of neurotransmitter, ion channels and genetic factors in epilepsy are listed in table 1, 2 &3 respectively. 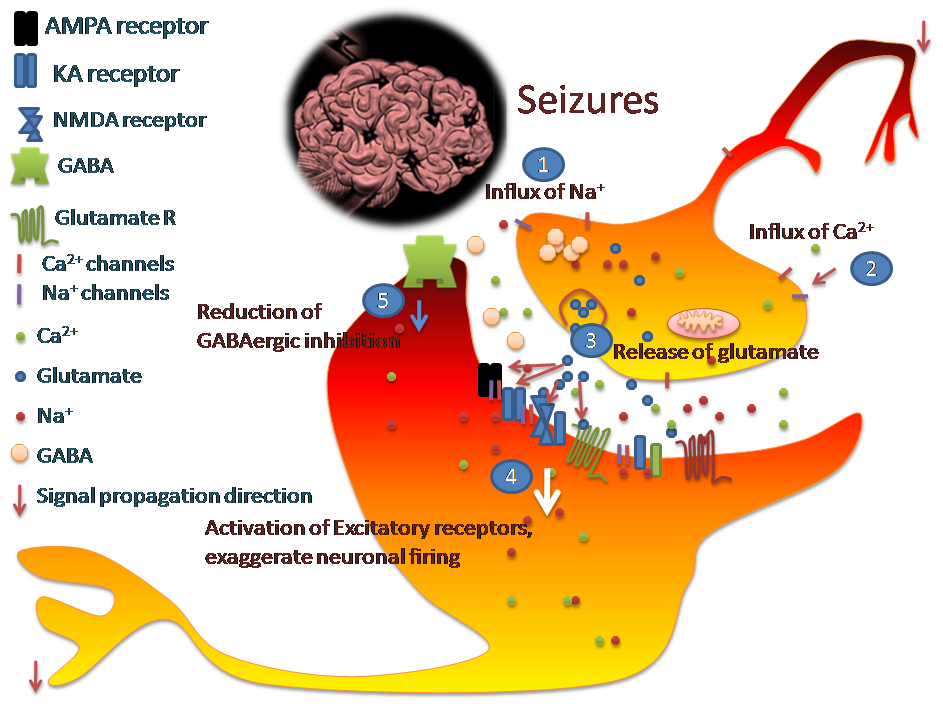 Figure 1:Neuronal firing during seizures. Neuronal firing is triggered by altered signal propagation. This may be the result of abnormalities in neuronal membrane stability or in the connections among neurons. Epileptic bursts consist of sodium dependent action potentials (1) and a calcium-dependent depolarizing potential (2). The opening of voltage activated Ca2+ channels and results in the flood of neurotransmitter (glutamate) into the synaptic cleft (3). Increased the accumulation of glutamate activate  N-methyl-D-aspartate, α-amino-3-hydroxy-5-methyl-4-isoxazolepropionic acid and kainate receptors with consequent influx of Na+ and Ca2+ ions through the channels gated by these receptors leads to Neuronal hyper-excitability (4). Uncontrolled increase in Disinhibition is also one of the key events in the generation of epileptic seizures, since a reduction of GABAergic inhibition is necessary to produce the synchronous burst discharges in groups of cells (5).

Table 1: Role of neurotransmitters in epilepsy

Causes of Seizures and Epilepsy
Mechanisms of seizures are not clearly known but assumed to be a genetic factor that code for the Na+/ca++ ion channel protein; disturbance in inhibitory neurotransmitter GABA and excitatory amino acid Glutamate; brain injuries like stroke, infection, blow of head, high fever and tumor. Causes of seizures vary by age of person. One-third of children with autism spectrum disorder may have seizures. Seizures commonly begin in people over age of 60. Common causes of seizures are listed in table 4.

Classification of epilepsy:
Classificationof epilepsy is essential for understanding of epileptic seizure, correct diagnosis and first step towards correct treatment. It is helpful for both clinician and researcher. The International League Against Epilepsy (ILAE) published the last official update for the epilepsies in 1989. A report in 2010 by the ILAE Commission on Classification and Terminology recommended that changes be made in the current conceptualization, terminology, and definitions of seizures and epilepsy. Classification of epilepsy and syndromes are listed billow.

(Epileptic syndromes of unknown etiology are classified as cryptogenic)

Epilepsies and Syndromes Undetermined as to Whether They Are Focal or Generalised
1. With both generalised and focal seizures
· Neonatal seizures
· Severe myoclonic epilepsy in infancy
· Epilepsy with continuous spike waves during slow wave sleep
· Acquired epileptic aphasia (Landau-Kleffner syndrome)

2. Without unequivocal generalised or focal features
· This heading covers all cases where clinical and EEG findings do not permit classification as clearly generalised or localisation-related, such as in many cases of sleep tonic-clonic seizures