ABSTRACT
Any medication used for diagnosis, prophylaxis or treatment of the patient is capable of producing an adverse reaction. Allergy is the most common unexpected adverse reaction; encountered with antibiotics, salicylates, ACE (angiotensin converting enzyme) inhibitors and dye agents. Paraphenylenediamine (PPD) is a chemical substance that is widely used as a permanent hair dye. PPD is used in hair dye because it is a permanent dye that gives a natural look, and the dyed hair can also be shampooed or permed without losing its colour. Fully oxidized PPD is not a sensitiser, but the intermediate, partially oxidised form of PPD may cause contact allergic dermatitis in sensitive individuals.In this case report we discuss about the ppd allergy in the older person who are having diabetes ,hypertension and heart diseases. The case is being reported to bring attention of the medical fraternity towards importance of sound pharmaco-vigilance and prepare them to with efficient preventive measures before using of these dyes. This case can also provide a vital data regarding anaphylactic reaction to a dye.

INTRODUCTION:
Para-phenylenediamine (PPD) was first described by Hofmann in 18631 and formulated to use in hair dye at the end of the 19th century. It is a preferred constituent in many hair dyes in view of the longer lasting nature and black, natural appearing pigmentation imparted to the hair (Ambika Prasad Patr,2015). Ppd is usually mixed with peroxide in the dye to alter the hair color ,it is more likely to interact with the skin and cause an allergic reaction(Dorra Amira,2015). ppdis not known to be carcinogenic but it has been liked o reversal health problems.exposure routes through inhalation,skin absorption ingestion eye contact.symptoms of exposure include angioedema,blisters,sensitization dermatitis(Fabiola kind ,2012). In addition to skin it affects respiratory and gastrointestinal systems and presents with laryngeal swelling that can be life threatening. It is important to recognise the condition early so not to give inappropriate treatment (Hilal Gokalp,2014). 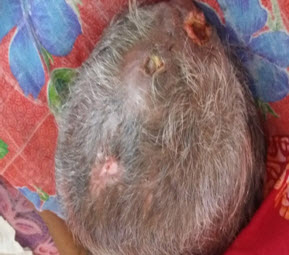 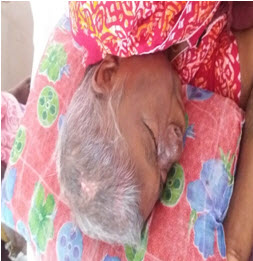 A 63 yrs old female patient  was admitted in department of general medicine at svrrggh hospital, with a 1 week history of blisters in head, pus discharge ,severe swelling of face,marked periorbital edema .which developed over 2days back there wasnhistory of previous sensitization with the use of black henna (or)hair dye. Patient wask/c/o cad/htn/dm-2,uncontrolled sugar levels ,these factor mainly trigger the reaction in this patient.she was already taken medicine for treating complications such as Amlodipine 5 mg  for HTN ,inj.insulin, human mixtard 3u ,aspirin 75mg.she was initially treated at local hospital and given amoxicillinfor apressumed diagnosis of celulitis ,she was taken to the hospital ,on day 3 of symptoms where she received Pipertz 4.5g,metrogyl,human mixtard, Amlodipine.this made no improvement and patient was reffered to  surgery(scalp absess done by using LA10-15 ml of fluid drained) she had severe facial edema with marked periorbital edema. there was no swelling of the tongue, she had blisters on the scalp, after surgery the patient was admitted in general medicine ward. taking medication aspirin. metrogyl, Pipertz, human mixtuard, topically she received clobetasol cream to her face .patient was made partially recovery because his past history diseases. Discharged  and prescribe cetomacrogel and fluocinolone gel for scalp  and 1%hydrocortisone for the face, and other drugs for the treatment of HTN/CAD/T2 DM.

CONCLUSION:
Even the first dose of PPD can cause anaphylactoid reaction, especially in the older persons with diabetes, hypertension and heart diseases, so they have to be most cautious during the application of hair dyes.  PPD is  used as an excipient during the preparation of traditional cosmetics to maintain the fixation of dark color. This substance can cause serious health problems. Therefore, a regulatory decision should be taken by the government to control the use of PPD in cosmetic products. Thus reporting of such type of adverse drug reaction is very much fruitful for dealing in future with these reactions for wellness of community.