ABSTRACT
A simple, sensitive, precise, accurate and rapid RP-HPLC method has been developed and validated for the simultaneous determination of Chlorzoxazone and Diclofenac sodium from synthetic mixture. The chromatographic separation was performed on ACE 5 C18 column (150 mm × 4.6 mm i.d., 5 μm particle size). Mobile phase consisted of a mixture of phosphate buffer (0.02 M KH2PO4, pH adjusted to 3 using orthophosphoric acid), acetonitrile and methanol (30: 30: 40, v/v/v) at a flow rate of 1.0 ml/min. The detection wavelength was set at 279 nm. The proposed method was validated for linearity, accuracy, precision, LOD and LOQ. The calibration curve was linear over the range of 2-50 μg/ml for Chlorzoxazone and 2-50 μg/ml for Diclofenac sodium. The retention times were 2.8 min for Chlorzoxazone and 6.3 min for Diclofenac sodium. The mean recoveries were 101.1 ± 0.47 and 100.8 ± 0.77 for Chlorzoxazone and Diclofenac sodium, respectively. The method has been successfully applied to determine the content of both drugs from the synthetic mixture. Hence, the method can be easily adopted for quality control analysis of both drugs in mixture. 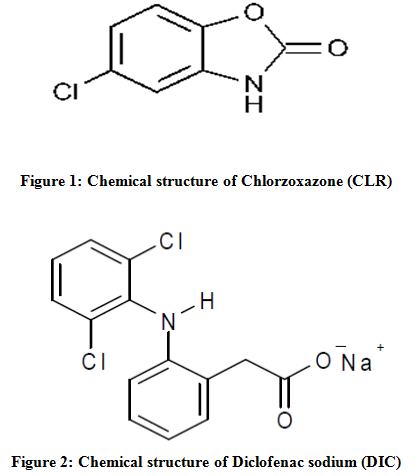 Preparation of standard stock solutions of CLR and DIC (100 μg/ml)
An accurately weighed standard CLR and DIC powder (10 mg) were weighed and transferred to 100 ml separate volumetric flasks and dissolved in methanol. The flasks were shaken and volumes were made up to mark with methanol to give a solution containing 100 μg/ml of each CLR and DIC.

Methodology
To optimize the RP-HPLC parameters, several mobile phase compositions were tried. A satisfactory separation and good peak symmetry for CLR and DIC was obtained with a mobile phase consisting of phosphate buffer (0.02 M KH2PO4, pH adjusted to 3 using orthophosphoric acid): acetonitrile: methanol (30: 30: 40, v/v/v)at a flow rate 1.0 ml/min to get better reproducibility and repeatability. Quantification was carried out at 279 nm based on peak area. Complete resolution of the peaks with clear baseline was obtained (Figure 3). System suitability test parameters for CLR and DIC for the proposed method are reported in Table 1. Overlain UV spectrum showed that both drugs showed good absorbance at 279 nm, hence the wavelength of 279 nm was selected for quantification of CLR and DIC (Figure 4). 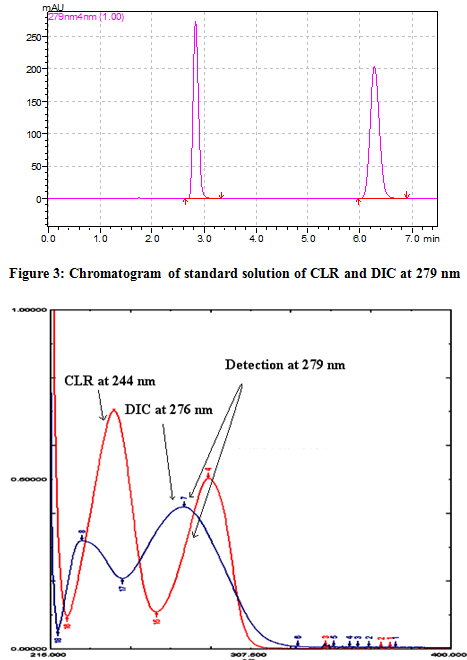 Calibration Curve (linearity)
Calibration curves were constructed by plotting peak areas Vs concentrations of CLR and DIC, and the regression equations were calculated. The calibration curves were plotted over the concentration range 2-50 µg/ml for CLR and DIC. Accurately measured standard working solutions of CLR and DIC (0.2, 0.4, 0.8, 1.6, 2.0, 3.0, 4.0 and 5.0 ml) were transferred to a series of 10ml of volumetric flasks and diluted to the mark with mobile phase. Aliquots (20 µl) of each solution were injected under the operating chromatographic conditions described above.

Method precision (Repeatability)
The precision of the instrument was checked by repeatedly injecting six sample solutions of CLR and DIC (8 μg/ml) under the same chromatographic condition and measurements of peak area, retention time and tailing factor. Percentage relative standard deviation (RSD) or coefficient of variation (CV) should not be more than 2 %.

Intermediate precision (Reproducibility)
The intraday and interday precision of the proposed method was determined by analyzing the corresponding responses 3 times on the same day and on 3 different days over a period of 1 week for 3 different concentrations of sample solutions of CLR and DIC (4, 8, and 16 μg/ml). The results were reported in terms of relative standard deviation (RSD).

Limit of detection and Limit of quantification
LOD and LOQ of drugs can be calculated using the following equations designated by International Conference on Harmonization (ICH) guidelines21.

Where, σ = the standard deviation of the response and S = slope of the calibration curve.

Estimation of CLR and DIC from synthetic mixture
CLR (50 mg) and DIC (5 mg) standard drug powder were accurately weighed and then mixed with commonly used formulation excipients like starch, lactose, magnesium stearate and talc in appropriate proportion. The mixture was then transferred to 100 ml volumetric flask containing 50 ml methanol and sonicated for 20 min. The solution was filtered through Whatman filter paper No. 41 and the volume was adjusted up to the mark with methanol. The above solution (0.4 ml) was transferred to 10 ml volumetric flask and diluted up to mark with methanol to obtain 20 µg/ml CLR and 5 µg/ml DIC. Aliquot (20 µl) of sample solution was injected under the operating chromatographic condition as described above and peak area was determined for both drugs. From these area values, the concentrations of CLR and DIC were determined using respective calibration graph. The analysis procedure was repeated six times with synthetic mixture.