POLYMERS USED IN MICROSPHERES:[16]
Polymers used in the microsphere are generally classified into two types:

Preparation of microspheres should satisfy certain criteria:
1. The ability to incorporate reasonably high concentrations of the drug.
2. Stability of the preparation after synthesis with a clinically acceptable shelf life.
3. Controlled particle size and dispersibility in aqueous vehicles for injection.
4. Release of active reagent with a good control over a wide time scale.
5. Biocompatibility with a controllable biodegradability and Susceptibility to chemical modification.

A. Emulsion solvent evaporation technique:[20]
In this technique the drug is dissolved in polymer which was previously dissolved in chloroform and the resulting solution is added to aqueous phase containing 0.2 % sodium of PVP as emulsifying agent. The above mixture was agitated at 500 rpm then the drug and polymer (eudragit) was transformed into fine droplet which solidified into rigid microspheres by solvent evaporation and then collected by filtration and washed with demineralised water and desiccated at room temperature for 24 hrs. Aceclofenac microspheres were prepared by this technique. 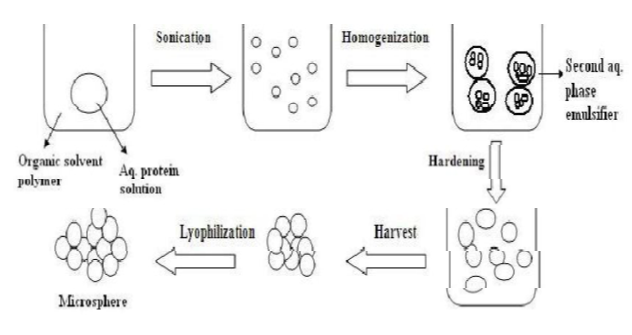 B. Emulsion cross linking method:[21]
In this method drug was dissolved in aqueous gelation solution which was previously heated for 1 hr at 40oC. The solution was added drop wise to liquid paraffin while stirring the mixture at 1500 rpm for 10 min at 35oC, results in w/o emulsion then further stirring is done for 10 min at 15oC. Thus the produced microspheres were washed respectively three times with acetone and isopropyl alcohol which then air dried and dispersed in 5mL of aqueous glutaraldehyde saturated toluene solution at room temperature for 3 hrs for cross linking and then was treated with 100mL of 10mm glyciene solution containing 0.1%w/v of tween 80 at 37oC for 10 min to block un reacted glutaraldehyde.Examples for this technique is Gelatin A microspheres.

C. Emulsion-Solvent Diffusion Technique:[22]
In order to improve the residence time in colon floating microparticles of drug is prepared by emulsion solvent diffusion technique. The drug polymer mixture is dissolved in a mixture of ethanol and dichloromethane (1:1) then the mixture is added drop wise to sodium lauryl sulphate (SLS) solution. The solution is stirred with propeller type agitator at room temperature at 150 rpm for 1 hr, washed and dried in a desiccator at room temperature.

D. Emulsification Heat Stabilizing Technique:[23]
In this method, drug and polymer are dissolved in 20 ml of deionised water and 5 ml of egg albumin solution and 0.1% of Tween?80 are added stirred it for 30 min. The prepared solution is used as aqueous phase. The oil phase is prepared by mixing 20 ml of sunflower oil and 5ml of diethyl ether with 1% span?80 (as emulsifier) and stirred it for 20 mins at 800?1000 rpm on a magnetic stirrer. The primary emulsion is prepared by adding the oil phase drop wise to the aqueous phase followed by stirring it for 30 mins at 800?1000 rpm. The prepared primary emulsion is added to pre?heated (65 to 70?C) sunflower oil (80 ml) by using 21 No. needle and stirred at 1000?1200 rpm for 2 hrs till the solidification of microspheres takes place. The suspension then allowed to cool to room temperature with continuous stirring using a magnetic stirrer. On cooling, 100 ml of anhydrous ether is added. The suspension containing the microspheres is centrifuged for 15 mins and the settled microspheres are washed three times with ether to remove traces of oil on microspheres surfaces. The obtained microspheres are then vacuum dried in a desiccator overnight and stored at 4?C in dark.

a) Thermal Change: Microspheres are formed by dissolving polymer (ethyl cellulose) in cyclohexane with vigorous stirring at 80 ?C by heating. Then the drug is finely pulverized and added to the above solution with vigorous stirring. The phase separation is brought about by reducing temperature using ice bath. The product is washed twice withcyclohexane and air dried then passed through sieve (sieve no. 40) to obtain individual microcapsule.

b) Non Solvent Addition: Microspheres are formed by dissolving polymer (ethyl cellulose) in toluene containing propyl-isobutylene in a closed beaker with stirring for 6 hrs. at 500 rpm and the drug is dispersed in it. Stirring is continued for 15 mins., then phase separation is brought about by petroleum benzene with continuous stirring. The microcapsules washed with n-hexane and air dried for 2 hrs., and kept in an oven at 50?C for 4 hrs

c) Polymer Addition: Microspheres are formed by dissolving polymer (ethyl cellulose) is dissolved in toluene, then1 part is added to 4 parts of crystalline methylene blue hydrochloride. Co-acervation is accomplished by adding liquid polybuta-diene. Then the polymer coating is solidified by adding a nonsolvent (hexane). The resulting product is washed and air dried.

d) Salt Addition: Microspheres are formed by dissolving oil soluble vitamin in corn oil and is emulsified by using pig skin gelatin under condition of temperature 50?C, coacervation is induced by adding sodium sulphate. Stirring is necessary for uniform coating of gelatin. The resultant microspheres product is collected and washed with water, chilled below gelation temperature of gelatin and dried by using spray drying.

e) Polymer-Polymer Interaction: In this process, aqueous solution of gum Arabica and gelatin (isoelectic point 8.9) are prepared, the homogeneous polymer solutions are mixed together in equal amount, diluted to about twice their volume with water, adjusted to pH 4.5 and warmed to 40- 45?C. the oppositely charged macromolecules interact at these conditions and undergo co-acervation. While maintaining the warm temperature, the liquid core material (methyl salicylate) is added to polmer solution and stirred well. Then the mixture is cooled to 25?C and coating is rigidised by cooling the mixture to 10?C.

F. Spray drying technique:[25]
This was used to prepare polymeric blended microsphere loaded with ketoprofen drug. It involves dispersing the core material into liquefied coating material and then spraying the mixture in the environment for solidification of coating followed by rapid evaporation of solvent.4 Organic solution of poly (epsilon-caprolactone) (PCL) and cellulose acetate butyrate (CAB), in different weight ratios and ketoprofen were prepared and sprayed in different experimental condition achieving drug loaded microspheres. This is rapidbut may loose crystalinity due to fast drying process. 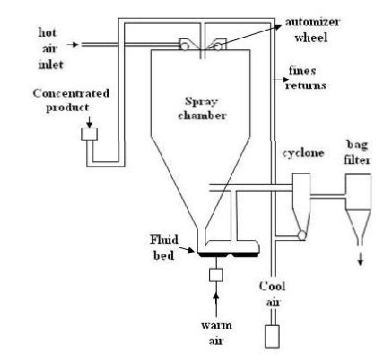 G. Polymerization Techniques:[26],[27].
Mainly two techniques are used for the preparation of microsphere by polymerization technique:

1. In bulk polymerization, a monomer or a mixture of monomers along with the initiator or catalyst is usually heated to initiate polymerization. Polymer obtained may be moulded as microspheres. Drug loading may be done by adding the drug during the process of polymerization. It is a pure polymer formation technique but it is very difficult to dissipate the heat of reaction which affects the thermo labile active ingredients.

2. Suspension polymerization is carried out at lower temperature and also referred to as pearl polymerization in which the monomer mixture is heated with active drug as droplets dispersion in continuous aqueous phase. Microsphere size obtained by suspension techniques is less the 100 μm.

3. Emulsion polymerization differs from the suspension polymerization due to presence of initiator in aqueous phase and also carried out at low temperature as suspension. External phase normally water in last two techniques so through which heat can be easily dissipated. The formation of higher polymer at faster rate is possible by these techniques but sometimes association of polymer with the un- reacted monomer and other additives can occur.

(b)  Interfacial polymerization:
It involves the reaction of various monomers at the interface between the two immiscible liquid phases to form a film of polymer that essentially envelops the dispersed phase. In this technique two reacting monomers are employed; one is dissolved in continuous phase while other is dispersed in continuous phase (aqueous in nature) throughout which the second monomer is emulsified. Two conditions arise because of the solubility of formed polymer in the emulsion droplet. The formation is Monolithic, if the polymer is soluble in droplet and the formation is Capsular type if the polymer is insoluble in droplet.

H. Ionic gelation:[28]
Alginate/chitosan particulate system for diclofenac sodium release was prepared using this technique. 25 % (w/v) of diclofenac sodium was added to 1.2 % (w/v) aqueous solution of sodium alginate. In order to get the complete solution stirring is continued and after that it was added dropwise to a solution containing Ca2+ /Al3+ and chitosan solution in acetic acid. Microspheres which were formed were kept in original solution for 24 hr for internal gellification followed by filteration for separation. The complete release was obtained at pH 6.4-7.2 but the drug did not release in acidic pH.

I. Hydroxyl appetite (HAP) microspheres in sphere morphology:[28]
This was used to prepare microspheres with peculiar spheres in sphere morphology microspheres were prepared by o/w emulsion followed by solvent evaporation. At first o/w emulsion was prepared by dispersing the organic phase (Diclofenac sodium containing 5% w/w of  EVA and appropriate amount of HAP) in aqueous phase of surfactant. The organic phase was dispersed in the form of tiny droplets which were surrounded by surfactant molecules this prevented the droplets from co solvencing and helped them to stay individual droplets .While stirring the DCM was slowly evaporated and the droplets solidify individual to become microspheres.

J. Hot Melt Microencapsulation Technique:[29]
The polymer is first melted and then mixed with solid particles of the drug that has been sieved to less than 50 μm. The mixture is suspended in a non-miscible solvent (like silicone oil), continuously stirred, and heated to 5°C above the melting point of the polymer. Once the emulsion is stabilized, it is cooled until the polymer particles solidify. The resulting microspheres are washed by decantation with petroleum ether. The primary objective for developing this method is to develop a microencapsulation process suitable for the water labile polymers, e.g. polyanhydrides. Microspheres with diameter of 1-1000 μm can be obtained and the size distribution can be easily controlled by altering the stirring rate. The only disadvantage of this method is moderate temperature to which the drug is exposed.