ABSTRACT: Asparagus racemosus (A. racemosus) is a well-known medicinal plant due its various application in Ayurveda. It contains various type of secondary metabolite active natural products (or ingredients) such as steroids, alkaloids, flavonoids, furan derivatives and essential oils. In the present scenario due to growing catastrophic effect of diseases in human life, researchers are trying to stop synthetic drugs by replacing with herbal drugs. Herbal drug treatments are in general used to provide first-line and public health provider, both to persons abode in faraway areas the place it is the only on hand wellness service, and to people residing in bad areas the place it offers the one cheap relief. In this point of view A. racemosus can show a new path of herbal treatment.

INTRODUCTION:
Medicinal plants are the nature’s gift to human being to cure disease and make healthy life. Herbal medicine is still the backbone of about 75-80% of the total population, mainly in developing nations, for primary health care because, better compatibility with the human body and fewer side effects (Barmet, 1992). In India thousands of species are known to have medicinal importants and the use of different parts of several medicinal plants to cure specific ailments has been in trend since ancient times (Parekh, Jadeja, & Chanda, 2006). Herbal medication, also called botanical treatment or phytomedicine, denotes to the use of any plant's parts such as seeds, berries, roots, leaves, bark, or flowers for medicinal purposes. Shatavari means who hold potential to cure “hundred diseases or suitable to many” (Bopana & Saxena, 2007). Asparagus racemosus (Shatavari) is encouraged in Ayurvedic texts for the prevention and medication of gastric ulcers, dyspepsia and as a galactogogue. A. racemosus has additionally been used by some Ayurvedic practitioners for worried problems. It is considered as huge efficient tonic both for male and female for fertility from long time. Due to its remarkable Pharmacological activity, in Ayurveda Sastra it is known as “Queen of herbs” Shatavari is known in various name in various part of India and also around the globe. . Use of A. racemosus is vindicated in ancient literature of Ayurveda (Charaka Samhita)(Chawla, Chawla, Mangalesh, & Roy, 2011). Its medicinal uses has been reported in the Indian Pharmacopoeias and British Pharmacopoeias and in traditional system of medicine such as Ayurveda, Unani and Siddha.   In recent years, a large number of plant products have been inspected for their antimicrobial stuffs against bacteria and fungi. The study will also confirm if there is a biological basis to the claim that the ethnomedicinal plant has useful medicinal purposes (Cowan, 1999).

The genus Asparagus existed around 300 species around the world, out of which 22 species found in India. A. racemosus is broadly distributed around various corner of the world.(Kirtikar, 1918). Medicinal plants and herbal drugs account for a giant percent of the pharmaceutical market (Hawkins & Ehrlich, 2007)

CULTIVATION, CHARACTERISTICS AND MORPHOLOGY:
It was first botanically defined in 1799(GRIN). It grows one to two meters tall and desires to take root in raspy, stony soils high up in piedmont plains, at height 1300-1400 m altitude (Freeman, 2009).

Cultivation:
A. racemosus is a common and important medicinal plant which grow up all over the India, Sri Lanka, and Himalayas & over the World. Due to its various medicinal application the demand of A. racemosus is constantly increases, because of destructive harvesting, combined with habitat destruction and deforestation this plant fall in a risk situation. In Thailand roots of the tree have been used for treatment of spleen, liver and other internal organs (Wiboonpun, Phuwapraisirisan, & Tip‐pyang, 2004). In India, generally roots are utilized as a remedy for internal pains, tumors, fever and as a tonic (Kala, 2009). 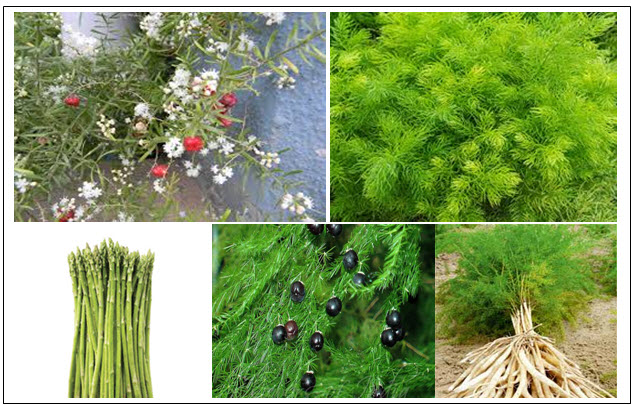 Characteristics:
A. racemosus is a woody climbing plant growing to 1-2 m in length. The leaves are small like pine needles, uniform and shiny green, flowers are white and have small spikes and in September month it fruits, producing blackish purple like globular shapes. 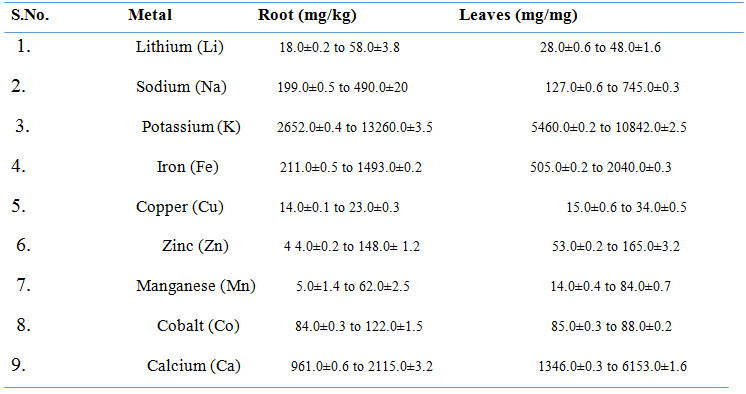 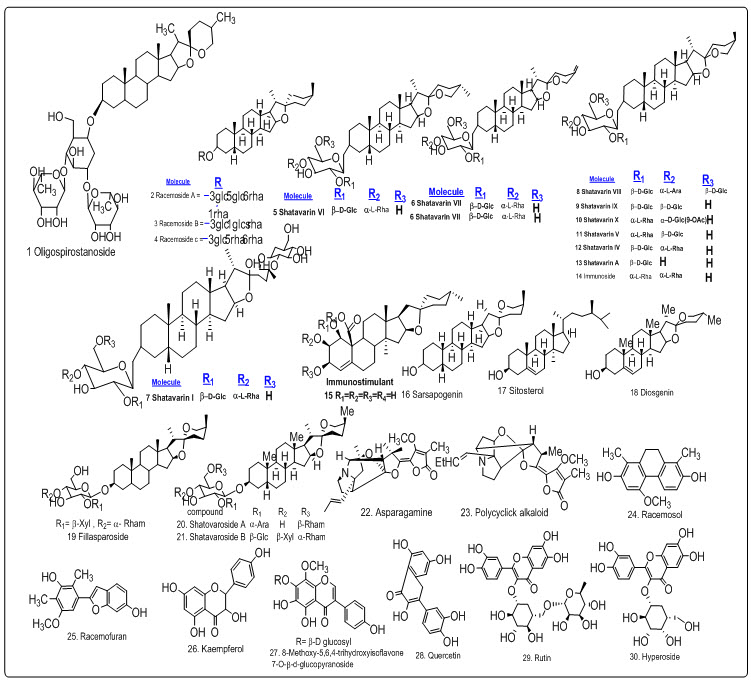 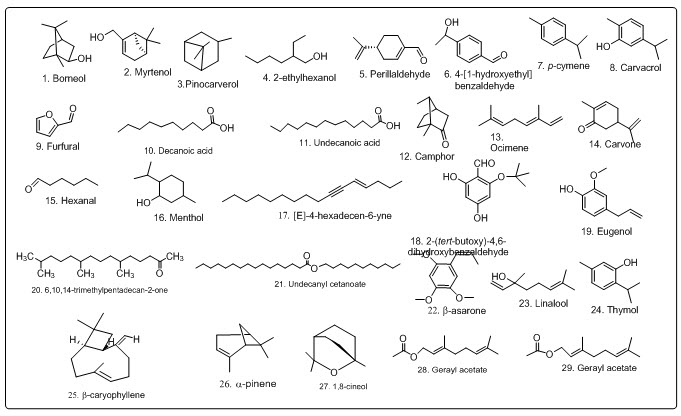 Fig.3 Structures of volatile components of A. Racemosus

Medicinal Significance:
Asparagus racemosus could be a principal healthful plant of tropical and semitropical India. Its healthfulutilization has been pronounced within the Indian and British formulary it's very often known for its phytoestrogenic residences. In written material, Asparagus racemosus has been delineated as a rasayana herb and has been used unremarkably as an adaptogen to expand the non-distinctive resistance of organisms against a spread of stresses except use inside the healing of symptom and infectious disease, the plant additionally has inhibitor, immunostimulant, antidyspepsia and medicament results. The roots area unit usedin Ayurvedic medication, following a programme of process and drying. It's commonly used as a female internal reproductive organ tonic, as agalactogogue (to provides a boost to breast milk), in acidity, and as a best common wellbeing tonic (Nag, Mukherjee, Roy, Paul, & Sahidul). A. racemosus is a outdated galactogogue both in animals and human’s therapy of duodenal ulcer with A. racemosus was mentioned. Antioxitocin action of this plant had been recognized and immunomodulatory properties are ascribed to the basis. The presence of antifungal and antimicrobial compounds in the higher plants is well established as they have delivered a source of inspiration for novel drug compound as plant derived medicines have made significant contribution towards human the treatment of diseases as is done in cases of  Unani and Ayurvedic system of medicines.

1. Antimicrobial activity:
The bacterial organisms including Gram positive and Gram negative like different species of Bacillus, Staphylococcus, Salmonella and Pseudomonas are the main source to cause severe infections in humans. Because these organisms have the ability to survive in harsh condition due to their multiple environmental habitats (Ahameethunisa & Hopper, 2010). In the worldwide as well as in the developing countries, the most human died due to infectious bacterial diseases (Nathan, 2004). The various inorganic and organic solvent extract of A. Racemosus show anti-bacterial and anti-fubgal activity (Patel & Patel, 2013). The root extracts of A. racemosus have been investigated for antibacterial property employing standard cylinder method. Microbes used were Bacillus subtilis, Staphylococcus aureus, Staphylococcus werneri, Pseudomonas aeruginosa and Escherichia coli, Proteus mirabilis, Kleibsella pneumonia, Pseudomonas putida. Both grampositive and gram-negative bacteria were sensitive to the extract. Ethanolic extract of concentration100mg/ml, 300mg/ml, 500mg/ml were prepared and there antibacterial activity was comparable to reference standard drug Gentamycin (25μg), Staphylococcus aureus the gram positive bacteria were most affected (Ravishankar et al., 2012). Experimental findings suggested that methanol extracts possessed high anticandidal activity against different Candida species. The MIC (Minimum inhibitory concentration) values were between 2.5 to 0.312 mg/ml, while MFC (Minimum fungicidal concentration) values ranged between 5 to 0.625 mg/ml (Uma, Prabhakar, & Rajendran, 2009).

2. Anticancer activity:
Cancer is a deadly disease of striking significance in the world today. It is one of the most serious health threats, responsible for the death of about seven million people in a year and a great challenge to medical science (Makar, Saha, & Singh, 2018). The root extract was shown to possess a protecting impact within the duct gland cell cancer eighty. endocrineelements of the A. racemosus were investigated for the apoptotic activity and inferred to possess the capabilityto tumour necrobiosis (Bhutani, Paul, Fayad, & Linder, 2010). Anticancer property of shatavarins (containing Shatavarin IV) which was extract from the roots of have been evaluated by MTT assay using MCF-7 (human breast cancer), HT-29 (human colon adenocarcinoma) and A-498 (human kidney carcinoma) cell lines and in vivo experimental model of Ehrlich ascites carcinoma (EAC) tumor bearing rats (Mitra, Prakash, & Sundaram, 2012). An aqueous solution of the crude alcoholic extract of the roots extract also shows antiprotozoal activity (Alok et al., 2013).

3. Antidepressant activity:
Adaptogenic drugs are such drugs which are useful as antistress agents by enhancing non-specific resistance of the body. Although, the adaptogenic effect of A. racemosus is well documented, its use in psychological disorders like depression is not scientifically evaluated. Hence, the present investigation evaluates the antidepressant effect of MAR standardized to saponins (62.2% w/w). Rats were given methanolic extract of roots of A. racemosus in doses of 100, 200 and 400 mg/kg every day for 7 day and then subjected to forced swim test (FST) and learned helplessness test (LH). The results showed that MAR decreased immobility in FST and increased avoidance response in LH indicating antidepressant activity (Singh, Garabadu, Muruganandam, Joshi, & Krishnamurthy, 2009).

7. Antineoplastic activity:
Chloroform-methanol (1:1) extract of fresh root of A. racemosus has been reported to reduce the tumor case in female rats treated with 7, 12 dimethyl benza. This exploit is suggested to be medicated by virtue of mammotropic and/ or lactogenic (Rao, 1981).

8.Effect on central nervours system:
Neither stimulant nor depressant action of lactare on central nervous system (CNS) have been reported in albino mice. Shatavari did not produce catalepsy in experimental rats, even with massive oral doses, telling that its action may be outside the blood-brain barrier (BBB),  similar to that of metoclopramide (Parihar & Hemnani, 2004). 12. Gastrointestinal effects:
The dried crushed root of A. racemosus is used in Ayurveda for dysepesia. Oral administration of powdered dried root of A. racemosus has been found to stimulate gastric emptying in healthy volunteers. Its action is reported to be comparable with that of the synthetic dopamine antagonist metoclopramide (Dalvi, Nadkarni, & Gupta, 1990). In Ayurveda, A. racemosus has also been mentioned for the treatment of ulcerative disorder of stomach and parinama sula, a clinical object akin to the duodenal ulcer disease

13. Antioxidant effects:
The probable antioxidant activity of crude extract and purified water fraction of A. racemosus against member injury induced by the free radicals generated during gama (γ) radiation were studied in rat liver mitochondria. Using an effective dose of 450 Gray antioxidant effect of A. racemosus extract were studied against oxidative damage term of protection against lipid peroxidation, protein oxidation. cantly inhibited lipid peroxidation and protein oxidation. The antioxidant activity of P3 fraction was more distinct against lipid peroxidation, as assessed by thiobarbituric acid reactive substance generation, while that of crude extract was more active in inhibiting proteins oxidation (Visavadiya, Soni, & Madamwar, 2009).

14. Teratogenicity effects:
Shatvari is a herb used as a rasayna in Indian Ayurveda and is considered both male and female reproduction tonic. Methanolic extract of A. racemosus roots (MAR), 100 mg/kg per day for 60 d, showed teratological disordres in terms of increase resorption of fetuses, gross malformation e.g. swelling in legs and intrauterine growth. A. racemosus should be used pregnancy constantly as its exposure during that period may cause damage to the offspring (Goel, Prabha, Kumar, Dorababu, & Singh, 2006).

16. Immunostimulant activity:
Intra-abdominal sepsis is key causes of mortality following trauma and bowel surgery. . Immunomodulating property of A. racemosus has been revealed to defend the rat and mice against experimental induced abdominal sepsis (Thatte, Chhabria, Karandikar, & Dahanukar, 1987). Oral administration of decotion of powdered root of A. racemosus been reported to produce leucocytosis and predominant neutrophilia along with greater phagocytic activity of the macrophages and polymorphs.

17. Miscellaneous effects:
Alcoholic extract of root of A. racemosus was found to have trivial diuretic effect in rats and hypoglycemic action in bunny, but no anticonvulsant and antifertility effect was observed in rats and rabbits, respectively. However, it did show some antiamoebic effect in rats.
Marketed Drugs:

Table no.2 List of Marketed drugs contain A. Racemosus 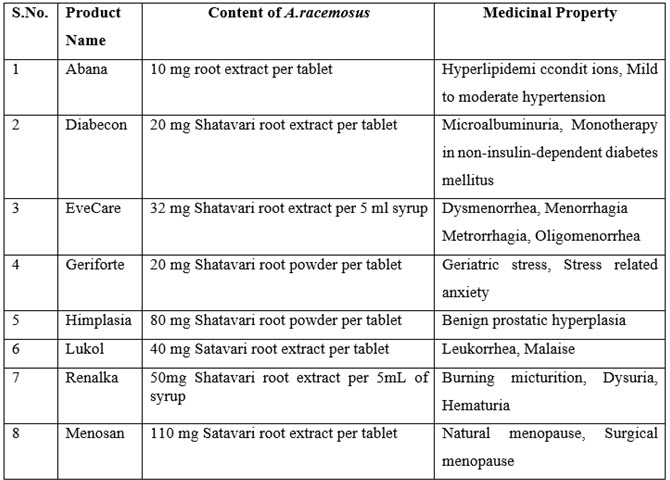 CONCLUSION: A. Racemosus is an important medicinal plant which used from ancient time in India, this review paper could be an answer to the people seeking for better therapeutic agents from natural sources which is believed to be more efficient with lesser or no side effects when compared to the commonly used synthetic agents.