F. OBJECTIVES AND USES OF ANTIMALARIAL DRUGS
The aims of using drugs in relation to malarial infection are:
1) To prevent clinical attack of malaria (Prophylactic).
2) To treat clinical attack of malaria (Clinical curative).
3) To completely eradicate the parasite from the patient’s body (Radical curative).
4) To cut down human to mosquito transmission. 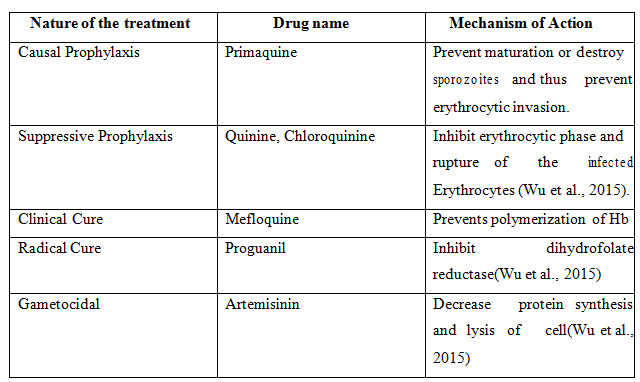 G. COMBINATION THERAPY
In recent times the task in the control and remedy of malaria is the emergence, unfold and consolidation of parasite lines (mainly Plasmodium falciparum) which are resistant to conventional antimalarial pills which include chloroquine and sulphadoxine-pyrimethamine. Its miles said that in a few regions the Plasmodium falciparum strains are proof against artemisinin and its derivatives due to K13 propeller mutations (Phyto et al., 2016). the fear is if artemisinin resistant traces are unfold to the opposite parts of the world, artemisinin mixture therapy (ACT) which has been the simplest first-line remedy thus far in many nations may meet the identical destiny as the opposite tablets. That is why discovery and development of more modern, novel and lower priced antimalarial capsules and of latest remedies is a pressing necessicity.
Advantages of combination therapy over the other commonly used antimalarial drugs are:
1) Rapid clinical and parasitological cure.
2) High cure rates and low recrudescence rate.
3) Absence of parasite resistance (the components prevent development of resistance to each other).
4) Good tolerability profile (Price & White, 2018).

EXCELLENT TARGET FOR ANTIMALARIAL DRUGDEVELOPMENT
Plasmodium sp. are apicomplexan parasites and that they contain apicoplast which seems to serve its host with multiple feature. Several biosynthetic pathways are characterized inside the apicoplast. The parasites which can be cured of their apicoplast do no longer die right away but they lack the property of invasion and therefore fail to invade new host mobile (Chakraborty, 2016). This suggests that apicoplasts provide a few components which can be critical to invasion and or status quo of the parasitophorous vacuole in the host cell. Present day efforts to pick out these components propose that apicoplast includes numerous metabolic pathways consisting of isoprenoid, fatty acid and heme biosynthetic pathways (Uddin, McFadden, & Goodman, 2018). Unlike the antibiotics used inside the malaria treatment which reasons delayed dying, target to the enzymes worried in these anabolic pathways led to defying behind schedule dying impact in Plasmodium falciparum. The absence of some of the enzymes involved in these pathways in human host also makes them more appealing, novel and ideal objectives (Tesfaye, Prakash, & Singh, 2015). 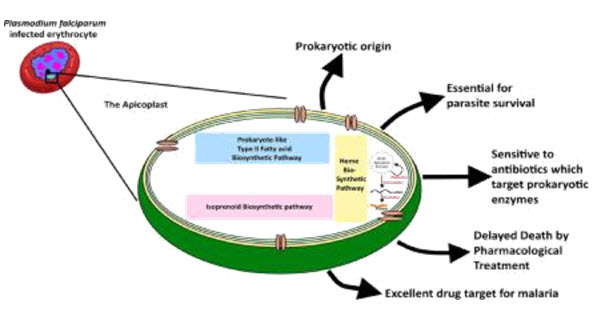 FATTY ACID BIOSYNTHESIS
Lipids are noticeably abundant components of all organisms which serve as constructing blocks of membranes, depots for energy garage and put up translational amendment which alter the localization and feature of protein. Fatty acid biosynthesis is critical for cellular boom, differentiation and homeostasis. Earlier than the discovery and characterization of various P.falciparum fatty-acid synthesis (FAS) enzymes, it changed into believed that P. falciparum lacks a de novo FAS pathway. However, this belief became rejected primarily based at the effects of the genomic sequencing of P. falciparum (Shears, Botté, & McFadden, 2015). The outcomes confirmed that P. falciparum is capable of synthesizing its own fatty acids. In addition, all of the enzymes of FAS pathway are recognized to be found in apicoplast. The FAS pathway present in the apicomplexan parasites are one of a kind from that in their human host or eukaryotic host. For example, in contrast to their eukaryotic hosts, the FAS pathway of apicomplexan parasites is catalyzed by way of distinct enzymes, and is referred to as typeII pathway or “dissociative” pathway. Then again, mammalian FAS pathway (type I or associative pathway) takes location in cytosol, and all steps of this pathway are catalyzed with the aid of fatty acid synthase, an unmarried giant polypeptide enzyme (Shears et al., 2017). FAS pathway in apicoplast is the principle source for the de novo synthesis of lipoic acid and fatty acid. Lipoic acid is synthesized each in apicoplast in addition to in mitochondria by way of the enzyme known as lipoic acid synthase. Lipoic acid is a robust antioxidant which might also have a main role in protecting the parasite in opposition to oxidative eight pressure in the course of the erythrocytic degree of its life cycle. The primary supply of carbon for this pathway is acetyl-CoA this is received either from acetate via the movement of acetyl-CoA synthetase or from pyruvate by pyruvate dehydrogenase complicated (PDHC). the primary enzyme in this pathway is acetyl CoA carboxylase (ACCase) which converts acetyl-CoA to malonyl-CoA that is later changed to malonyl-acetyl service protein (malonyl-ACP) by way of malonyl-CoA-ACP transacylase (MCAT). Β-ketoaceyl-ACP synthase III then catalyzes the condensation of malonyl-ACP with some other acetyl-CoA to shape a 3-oxoacyl-ACP product. Inside the elongation procedure, the carbonyl organization is eliminated and three-oxoacyl-ACP is reduced to 3-hydroxyacyl-ACP by 3-oxoacyl-ACP reductase (OAR) that enters in dehydration cycle (Oriero, Van Geertruyden, Jacobs, D'Alessandro, &Nwakanma, 2015). As soon as produced, the enzyme β-hydroxy-acyl-ACP dehydratase converts three-hydroxyacyl-ACP into enoyl-ACP which enters into the second reductive step (catalyzed through enoyl-ACP reductase) to complete the primary round of elongation cycle.

1 INHIBITORS OF FATTY ACID BIOSYNTHESIS
Several research on FAS II have pronounced that the growth of the blood-stage of Plasmodium may be inhibited with the aid of blocking various enzymes. it's been confirmed that the deletion of the vital enzymes of FAS II that are Fab B/F and Fab Z, did now not cause any effect on asexual blood stage replication but the overdue liver degree of such parasites changed into unable to shape exo-erythrocytic merozoites (Schoors et al., 2015).Some of the inhibitors which can inhibit fatty acid biosynthesis are given in the table below: 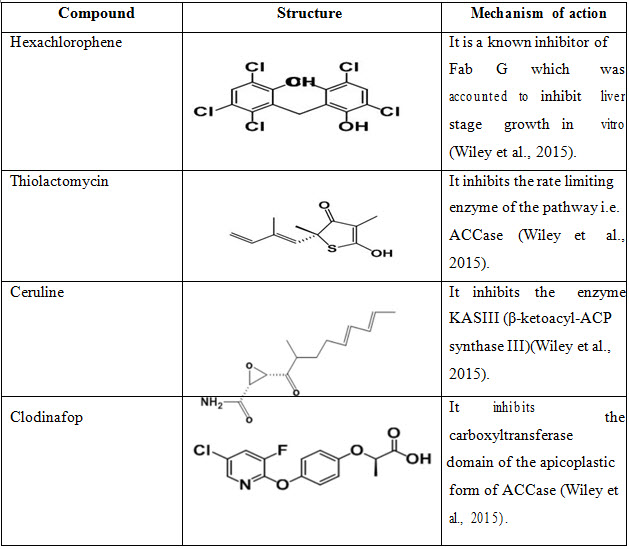