AN OVERVIEW ON POLYMERIC NANOPARTICLESUSED IN THE TREATMENT OF DIABETES MELLITUS

INTRODUCTION
Nanomedicine is a subdivision of nanotechnology, which uses small particles that are more than 10 million times smaller than the human body. In nano-medicine, these particles are greatlylesser than the living cell. Because of this, nanomedicine presents many innovativechances in the fight against all types of cancer, neurodegenerative disorders and other diseases. (SovanLal et al., 2011)

Liposomes are concentric bilayered vesicles in which an aqueous volume is completelysurrounded by a membranous lipid bilayer mainly composed of natural or synthetic phospholipids. Nanocrystals are aggregates of about hundreds or thousands of particles that combine in a crystal-like form, composed of pure drug with only a thin coating comprised of surfactant or combination of surfactants.(Nishikant et al., 2012, Senthilnathan et al., 2016) Solid Lipid Nanoparticles contain a solid lipid medium, where the drug is normally incorporated, with an average diameter below 1 μm. (Nagarajan et al., 2015) Dendrimers, anexceptional class of polymers, are extremely branched macromolecules whose size andshape can be exactlymeasured. Metallic nanoparticles are the having the metallic compounds like gold, silver, selenium, iron etc. the green synthesized nanoparticles are having the plant source of nanoparticles. (Nagavarma et al., 2012, Mohanraj et al., 2006)

Polymeric nanoparticles are commonly 10-1000nm in dimension. These polymeric nanoparticles are formulated from the polymers, which have the nature of bio-adaptability,bio-comptabilityand bio-degradable. The drug is dissolved, entrapped, encapsulated to a nanoparticle medium. The nanoparticles, nano-spheres or nano-capsules are obtained by depending up on the preparation. In nano-capsule system, the drug is limited to a cavity enclosed by evenpolymer layer, while the nano-shell contains of medium, in which the drug is physically and uniformly dispersed.(Konwar et al., 2013, Neha et al., 2013)

Disadvantages of polymeric nanoparticles
- Wide use of polyvinyl alcohol as a detergent –subjects with toxicity.
- Limited targeting capabilities.
- Termination of therapy is not possible.
- Cytotoxicity. (Naik et al., 2012)
- Pulmonary inflammation and pulmonary carcinogenicity.
- The trouble of autonomic inequity by nanoparticles consumingstraightresult on heart and vascular function. 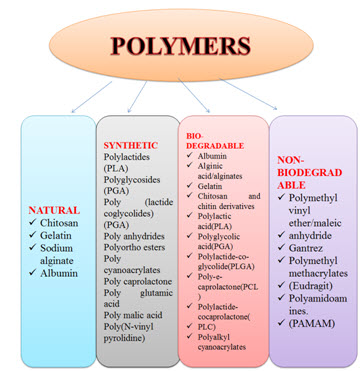 Emulsion-Solvent Evaporation Method:
This methodinvolves two steps. The first step is emulsification of the polymer solution into an aqueous phase. In second step polymer solvent is evaporated, making polymer precipitation as nanospheres. The nano particles are collected by ultracentrifugation and washed with distilled water to remove additivedeposit or any free drug and lyophilized for storage.9Modification of this method is high pressure emulsification-solvent evaporation method. This method involves preparation of an emulsion which is then subjected to homogenization under high pressure followed by complete stirring to eliminate organic solvent.The size of nanoparticles is controlled by regulating the stirring rate, type and amount of dispersing agent, viscosity of organic phase and aqueous phase and temperature.

Double Emulsion and Evaporation Method:
The disadvantage of emulsion-solvent evaporation method is poor entrapment of hydrophilic drugs. The double emulsion technique is overcomes this disadvantage and encapsulate the hydrophilic drugs, which is done by the addition of aqueous drug solutions to organic polymer solution under vigorous stirring to form w/o emulsions. This w/o emulsion is added into second aqueous phase with continuous stirring to form the multiple emulsions (w/o/w emulsion). The emulsion then allowed to removal of solvent by evaporation,nanoparticles are isolated by centrifugation at high speed. The formed nanoparticles are carefully washed before lyophilisation.

Emulsions- Diffusion Method:
The polymer is dissolved in a moderately water-miscible solvent (for example propylene carbonate, benzyl alcohol), and saturated with water to ensure the initial thermo-dynamic equilibrium of both liquids.(Anusha et al., 2011) Then, the polymer-water saturated solvent phase is emulsified in aqueous solution having stabilizer, leading to solvent diffusion to the external phase and the developmentof nanoparticles, according to the oil-to-polymer ratio. Finally, the solvent is removed by evaporation or filtration, as said by its boiling point.

Salting Out Method:
In this method polymer and drug are primarilydissolved in a solvent which is afterward emulsified into an aqueous gel containing the saltingout agent (electrolytes,for example magnesium chloride and calcium chloride, or non- electrolytes as sucrose) and a colloidal stabilizer for example polyvinylpyrrolidone or hydroxyethylcellulose. This o/w emulsion is dilute with anadequate amount of water or aqueous solution to increase the dispersion of solvent into the aqueous phase, hence the formation of nanoparticles.

Solvent Displacement / Precipitation method:
Solvent displacement includes the precipitation of a preformed polymer from an organic solution and the diffusion of the organic solvent in aqueous medium in the presence or absence of the surfactant. Polymers, drug, and lipophilic surfactantsare dissolved in a semi-polar water miscible solvent for example acetone or ethanol. The solution is now poured or injected into an aqueous solution having stabilizer above magnetic stirring. Nano particles are formed immediatelyby the rapid solvent diffusion. The solvent is then removed from the suspensions under reduced pressure. This method is well suited for most of the poorly soluble drugs.

Dialysis
This method is created on a solvent displacement mechanism which includesextra toolsfor example dialysis tubes or semi-permeable membranes through suitable molecular weight cut-offwhich helpby way of a physical barrier for the polymer. Therefore, dialysis is achieved against anon-solvent of the polymer miscible with the polymer solvent. The movement of thepolymer solvent through the membrane induces a progressive loss of solubility of thepolymer leading to the development of homogeneous nano suspensions.

Rapid Expansion of Supercritical Solution (RESS)
In this method, the solute is liquefied in a supercritical fluid to form solution, and then followed by the rapid development of the solution crossways the capillary nozzle into the ambientair. The rapid pressure reduction in the expansion results the homogeneous nucleation and the formation of fine dispersed particle.

Ionic gelation technique/coacervation of hydrophillic polymers
The decomposable hydrophilic polymers for example chitosan, gelatin and sodium alginate are used to formulate polymeric nanoparticles through ionic gelation method. This method containscombination of double aqueous phases, one is thepolymer chitosan and the other is a poly anion sodium tri-polyposphate. The tool of this method is, positive charge amino group of chitosan interacts with the negative charge tripolyposphate to form coacervate with in its size range of nanometer. The coacervation of polymer and particles are made by the electrostatic interfaceamongthe two aqueous phases. In ionic gelation technique the material undergoing alteration from liquid to gel because of the ionic interaction state at room temperature.

DIABETES MELITUS
Diabetes mellitus has been known to manhood for over 2000 years. It is probable to become one of the most predominant and economicallysignificant diseases of the 21stcentury in together the advanced and emerging nations. Diabetes Mellitusis a group of metabolic disorder considered by a wholelack of insulin, a comparative lack of insulin, or insulin resistance, which then results in hyperglycemia. (Deopa et al., 2013)

Diabetes mellitus is produced by changed metabolism of carbohydrate, lipid and lipoprotein subsequent from the fault in insulin secretion and action; it is characterized through symptom likehyperglycemia, glycosuria, polyphagia, polyurea, polydipsia, gradual loss of weight, fatigue, cramps, blurred vision, constipation, and candidiasis are prominent.(Harris et al., 1998) It is the most predominant chronic disease in the world affecting nearly 100 million people of the population where 5-10% having type 1 while 90-95% of them suffers from type 2 diabetes mellitus.Diabetes leads to many health complications such as hyperlipidemia, hypertension and atherosclerosis.

Type I diabetes can occur in any age. It is an immune mediated disease subsequent from destruction in β-cells of pancreas which leads to insufficientendogenous insulin making. Type II diabetes or non-insulin dependent diabetes mellitus is the most common type affecting old and obese individualproduced either by insulin resistance or lacking insulin secretion. It is characterized by hyperglycemia in the presence of hyperinsulinemia due to peripheral insulin resistance.A third type of diabetes gestation diabetes mellitus is first recognize during pregnancy where hyperglycemic disorder developsin women who doesn’t have diabetes result from an insufficient insulin supply to meet tissue demand for normal blood glucose regulation.(Fowler et al., 2008) Fourth type of diabetes is genetically modified diabetes mellitus there occur defects in β cell function or mutation of insulin receptor and may lead to diabetes. Other rare types of diabetes comprisepersons caused by surgery, drug used (e.g. antihypertensive vasodilator diazoxide, lower dose of thiazides, corticosteroids in high doses, high dose of anabolic androgens, oral contraceptives, streptozotocin, theophylline, asprin, isoniazid, alloxan, nalidixic acid ), malnutrition, infection and other illness

Insulin and its secretion
The insulin is a polypeptide hormone its molecular weight of 6000 Da. It is initially produced as a single molecule (pre-proinsulin) contains 110 amino acids released by the pancreatic β-cells. These are regulates the glucose levelin the system. It contains two polypeptide chains A and B. Chain A contains 21 amino acids and chain B having 30 amino acids. Two disulfide bonds covalently bind the chain where chain A containsan internal disulfide bridge. Hormone insulin is produced as pre- proinsulin in rough endoplasmic reticulum further by proteolysis it change to pro-insulin and then to insulin. After pre-proinsulin has passed through the endoplasmic reticulum, 24 amino acids are detached by enzymatic action from one end of chain, leaving anotherform pro-insulin that undergoesfolds and bonds to passes towardsGolgi body where the central section of 33 amino acids is detached by the action of the enzymespro-hormone convertase1 and 2 converting to final structure of insulin. (Sanjukta et al., 2015)

Hypoglycemic Drugs
Anti-diabetic drug acts by two main mechanisms one is stimulation of β-cells in pancreatic islet to release insulin and another one is increase the sensitivity or amount of insulin receptor.(Fowler et al., 2008)  Preoperatively, oral hypoglycemic agents, especially those that motivate insulin secretion, such as sulfonylurea and meglitinide agents, have possible for creating hypoglycemia during fasting prior to surgery. The sulfonylurea agents (e.g. glipizide, glyburide, glimepiride) are generallygiven oral hypoglycemic agents for the action of type 2 diabetes. These agents act by bind to the ATP-dependent potassium (KATP) channel in the pancreatic s-cells, leading to end of these channels and motivating insulin release. Thus, pancreatic β-cells are progressively responsive to glucose absorptions and insulin release is increased. Metformin, a biguanide oral hypoglycemic agent, is generally used for treatment of type II diabetes mellitus.α-glucosidase inhibitors are additional class of drugs that comprises compound like acarbose which delay the intraluminal production of glucose. Acarbose competitively stops α-glucosidase that is connected with the brush border membrane of the small intestine and responsible for the digestion of complex polysaccharides and sucrose. Natural compounds may be anothermanagement as they can be comprised in everydayfood and can be taken in larger amount without any risk. Many plants areidentified in traditional medicine of different culture to be used for their anti-diabetic property.