ABSTRACT
Ivabradine is a specific heart rate lowering agent, acting by reducing the rate of pacemaker
activity in the sinoatrial node. Ivabradine is a novel heart rate lowering medicine for the symptomatic management of stable angina pectoralis and symptomatic chronic heart failure. In multicenter clinical trials, it has been proved that Ivabradine is superior to beta-blocking agents during complex therapy of chronic heart failure accompanied with its beneficial effects related to cardiac remodeling, improvement of the currency of heart failure and diminution of patients rehospitalisation. It is suggested that Ivabradine as a newer agent is a valuable perspective drug for the treatment of congestive heart failure. This review is useful for the future study for researcher involved in formulation development and quality control of Ivabradine.

INTRODUCTION
Ivabradine is a specific heart rate lowering agent, acting by reducing the rate of pacemaker activity in the sinoatrial node. Chemically 3-[3-({[(7S)-3,4-dimethoxybicyclo[4.2.0]octa-1, 3, 5-trien-7yl] methyl} methylamino) propyl]-1, 3, 4, 5-tetrahydro-7,8-dimethoxy-2H-3-benzazepin -2-One and available in the form of hydrochloride salt Ivabradine is the  new class of drugs that have the ability of slowing the depolarization slope, reducing heart rate and show the activity similar to that of β-blockers. Ivabradine is freely soluble in water, methanol, and acetonitrile. The drug is a basic drug and having pKa values≈ 8.02. (O’Neil MJ., 2006, Sulfi et al., 2006 , Seerapu et al., 2010).

An increase in heart rate  is a common occurrence in cardiac pathophysiology, particularly in heart failure, mediated by β-adrenergic receptors (βARs) following activation of the sympathetic nervous system.  Although an elevated heart rate may initially compensate for insufficient cardiac output, sustained tachycardia usually leads to adverse haemodynamic consequences. Ivabradine is a novel pharmacological agent specifically inhibiting the hyperpolarization-activated pacemaker If–current (If) that underlies the rate of spontaneous diastolic depolarization in sinoatrial pacemaker cells. This drug is introduced in medical practice in the last decade is a pure heart rate-slowing agent. A large number of studies in patients with cardiovascular disease have demonstrated that heart rate is a very important and major independent risk factor for prognosis, because lowering of heart rate reduces cardiac work and diminished myocardial oxygen requirement. It was shown that ivabradine a selective inhibitor of the hyperpolarisation activated sodium channel (If) is involved in pacemaker generation and responsiveness of the sino-atrial node resulting in the heart rate reduction without negative inotropic action. Ivabradine in chronic heart failure improves diastolic function and attenuates cardiac tissue hypoxia. Long-term reduction of heart rate induced by Ivabradine reduced remodeling and preserved nitric oxide (NO) bioavailability, resulting from processes triggered early after reduction of heart rate. (Sulfi et al., 2006). 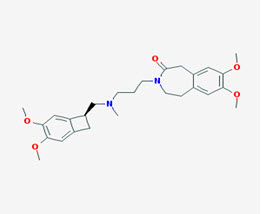 Mechanism of action-
Ivabradine blocks the hyperpolarization-activated cyclic nucleotide-gated (HCN) channel, and inhibit the If–current (If) which  reduces the cardiac pacemaker activity of the sinus node  which decreases heart rate without an effect on ventricular repolarization or myocardial contractility. Ivabradine is recommended for angina pectoralis and symptomatic chronic heart failure. Ivabradine inhibit the "funny" channel pacemaker current (If) in the sinoatrial node in a dose-dependent fashion, resulting in a lower heart rate and thus more blood to flow to the myocardium. When we use  calcium channel blockers and beta blockers for lowering heart rate, they are good in actiot but show adverse effcts due to their negative ionotropic effects. Therefore, Ivabradine is designed as a "pure" heart rate-lowering drug. It causes no serious adverse effects. (Corlanor® is a first-in-class, HCN channel blocker that lowers heart rate). 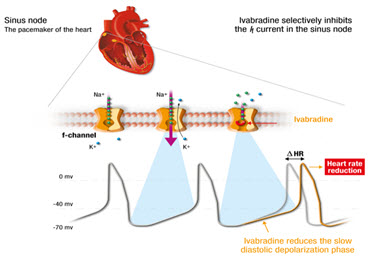