A team of University of Notre Dame researchers led by Mayland Chang and Shahriar Mobashery have discovered a new class of antibiotics to fight bacteria such as methicillin-resistant Staphylococcus aureus (MRSA) and other drug-resistant bacteria that threaten public health.

The new class, called oxadiazoles, was discovered in silico (by computer) screening and has shown promise in the treatment of MRSA in mouse models of infection. Researchers who screened 1.2 million compounds found that the oxadiazole inhibits a penicillin-binding protein, PBP2a, and the biosynthesis of the cell wall that enables MRSA to resist other drugs. The oxadiazoles are also effective when taken orally. This is an important feature as there is only one marketed antibiotic for MRSA that can be taken orally. 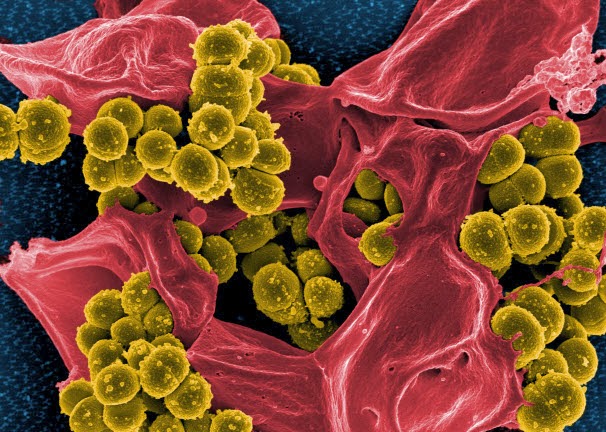 MRSA has become a global public-health problem since the 1960s because of its resistance to antibiotics. In the United States alone, 278,000 people are hospitalized and 19,000 die each year from infections caused by MRSA. Only three drugs currently are effective treatments, and resistance to each of those drugs already exists.

The researchers have been seeking a solution to MRSA for years. “Professor Mobashery has been working on the mechanisms of resistance in MRSA for a very long time,” Chang said. “As we understand what the mechanisms are, we can devise strategies to develop compounds against MRSA.”

“Mayland Chang and Shahriar Mobashery’s discovery of a class of compounds that combat drug resistant bacteria such as MRSA could save thousands of lives around the world. We are grateful for their leadership and persistence in fighting drug resistance,” said Greg Crawford, dean of the College of Science at the University of Notre Dame.

Their research is published in the Journal of the American Chemical Society in an article titled “Discovery of a New Class of Non-beta-lactam Inhibitors of Penicillin-Binding Proteins with Gram-Positive Antibacterial Activity.”