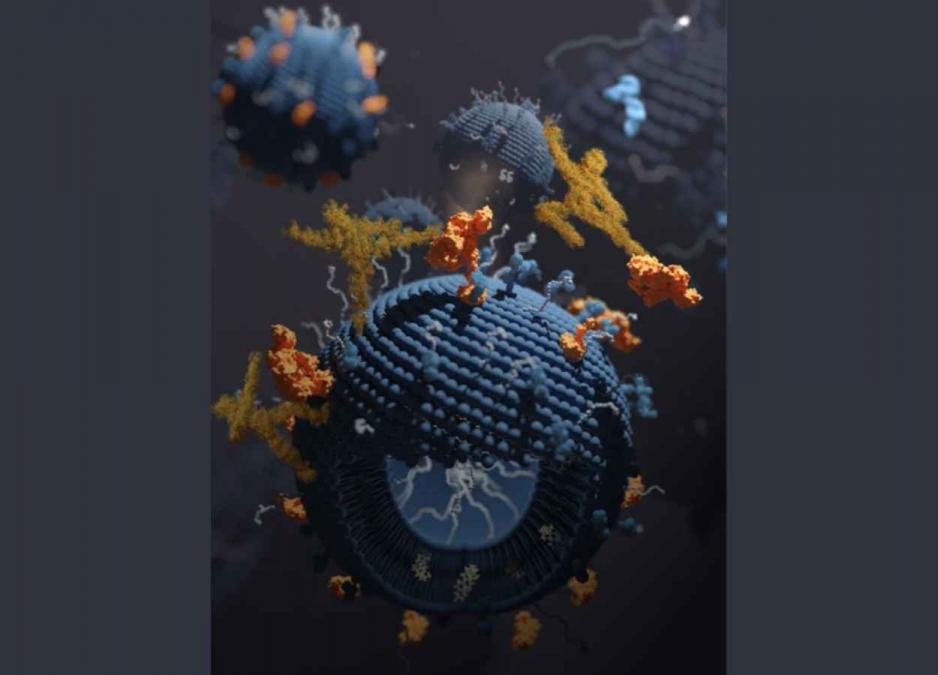 Researchers at Penn Medicine have discovered a new, more effective method of preventing the body’s own proteins from treating nanomedicines like foreign invaders, by covering the nanoparticles with a coating to suppress the immune response that dampens the therapy’s effectiveness.

When injected into the bloodstream, unmodified nanoparticles are swarmed by elements of the immune system called complement proteins, triggering an inflammatory response and preventing the nanoparticles from reaching their therapeutic targets in the body. Researchers have devised some methods to reduce this problem, but the Penn Medicine team, whose findings are published in Advanced Materials, has invented what may be the best method yet: coating nanoparticles with natural suppressors of complement activation.

Nanoparticles are tiny capsules, typically engineered from proteins or fat-related molecules, that serve as delivery vehicles for certain types of treatment or vaccine usually those containing RNA or DNA. The best-known examples of nanoparticle-delivered medicines are mRNA vaccines against COVID-19.

“It turned out to be one of those technologies that just works right away and better than anticipated,” said study co-senior author Jacob Brenner, MD, PhD, an associate professor of Pulmonary Medicine in the Division of Pulmonary, Allergy, and Critical Care.

The Complement Problem
Therapies based on RNA or DNA generally need delivery systems to get them through the bloodstream into target organs. Harmless viruses often have been used as carriers or “vectors” of these therapies, but nanoparticles are increasingly considered safer alternatives. Nanoparticles also can be tagged with antibodies or other molecules that make them hone in precisely on targeted tissues.

Despite its promise, nanoparticle-based medicine has been greatly limited by the complement attack problem. Circulating complement proteins treat nanoparticles as if they were bacteria, immediately coating nanoparticle surfaces and summoning large white blood cells to gobble up the “invaders.” Researchers have attempted to reduce the problem by pre-coating nanoparticles with camouflaging molecules—for example, the organic compound polyethylene glycol (PEG) attracts water molecules to form a watery, protective shell around nanoparticles. But nanoparticles camouflaged with PEG or other protective substances still draw at least some complement attack. In general, nanoparticle-based medicines that must move through the bloodstream to do their work (mRNA COVID-19 vaccines are injected into muscle, not the bloodstream) have had a very low efficiency in getting to their target organs, usually less than one percent.

Borrowing a Strategy
In the study, Brenner and Myerson and their team came up with an alternative or add-on approach to protect nanoparticles—an approach based on natural complement-inhibitor proteins that circulate in the blood, attaching to human cells to help protect them from complement attack.

The researchers found that, in lab-dish experiments, coating standard PEG-protected nanoparticles with one of these complement inhibitors, called Factor I, provided dramatically better protection from complement attack. In mice, the same strategy prolonged the half-life of standard nanoparticles in the bloodstream, allowing a much larger fraction of them to reach their targets.

“Many bacteria also coat themselves with these factors to protect against complement attack, so we decided to borrow that strategy for nanoparticles,” said co-senior author Jacob Myerson, PhD, a senior research scientist in the Department of Systems Pharmacology and Translational Therapeutics at Penn.

In a set of experiments in mouse models of severe inflammatory illness, the researchers also showed that attaching Factor I to nanoparticles prevents the hyper-allergic reaction that otherwise could be fatal.

Further testing will be needed before nanomedicines incorporating Factor I can be used in people, but in principle, the researchers said, attaching the complement-suppressing protein could make nanoparticles safer and more efficient as therapeutic delivery vehicles so that they could be used even in severely ill patients.

The researchers now plan to develop strategies for protecting not only nanomedicines but also medical devices, such as catheters, stents and dialysis tubing, which are similarly susceptible to complement attack. They also plan to investigate other protective proteins beside Factor I.

“We’re recognizing now that there’s a whole world of proteins that we can put on the surface of nanoparticles to defend them from immune attack,” Brenner said.

Image : Upon injection into the blood, nanomedicines (blue spheres) are immediately attacked by proteins of the immune system called complement proteins (orange). Complement proteins cause rapid destruction of the nanomedicine, and also induce an anaphylaxis-like reaction. By attaching complement-degrading proteins (yellow ninjas made of protein) to the surface of nanomedicines, Penn researchers have largely solved this problem, potentially allowing more diseases to be safely treated by nanomedicine.