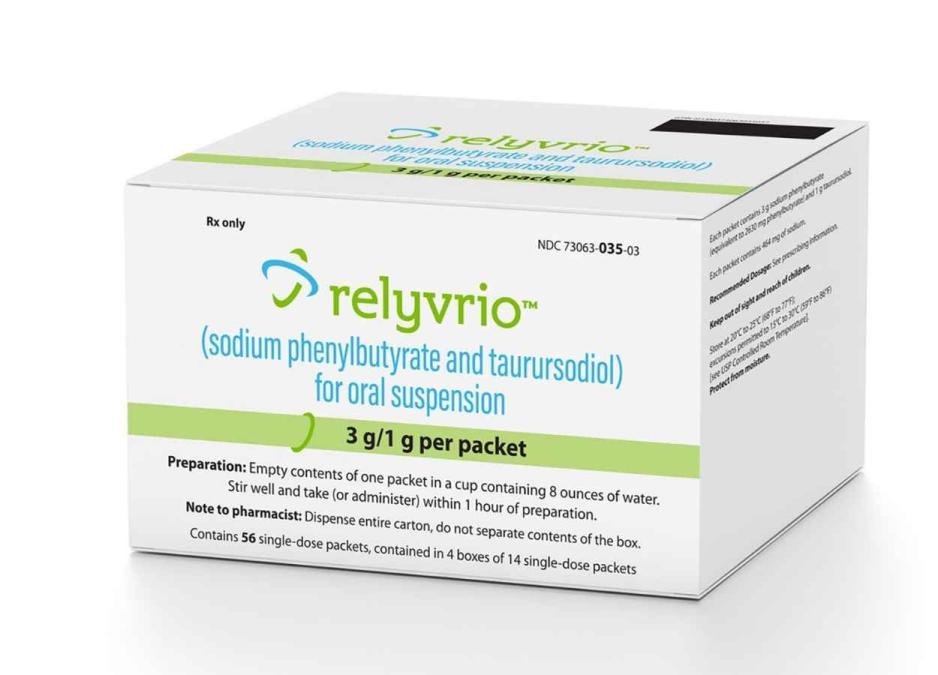 Amylyx Pharmaceuticals, Inc announced that the U.S. Food and Drug Administration (FDA) has approved RELYVRIO (sodium phenylbutyrate and taurursodiol) for the treatment of adults with amyotrophic lateral sclerosis (ALS). RELYVRIO (previously known as AMX0035 in the U.S.) significantly slowed the loss of physical function in people living with ALS in a randomized, placebo-controlled clinical trial. RELYVRIO can be taken as a monotherapy or with existing approved treatments.

“Today’s FDA approval of RELYVRIO is an exciting milestone for the ALS community and is a major step toward achieving our mission to one day end the suffering caused by neurodegenerative diseases,” said Joshua Cohen and Justin Klee, Co-CEOs of Amylyx. “We want to give a heartfelt thank you to the broader ALS community, including healthcare professionals and those living with ALS, for their guidance, support of our clinical programs, and for sharing their experiences with us. Their stories inspired us and helped our team to better understand the ALS clock, instilling in us a deep sense of urgency that will continue to drive us forward. This is just the beginning and there is much more to be done.”

ALS is a relentlessly progressive and fatal neurodegenerative disorder caused by motor neuron death in the brain and spinal cord. Motor neuron loss in ALS leads to deteriorating muscle function, the inability to move and speak, respiratory paralysis and eventually, death. More than 90% of people with ALS have sporadic disease, showing no clear family history. ALS affects approximately 29,000 people in the U.S.

Leading U.S. ALS advocacy organizations including The ALS Association, Answer ALS Foundation, I AM ALS, Les Turner ALS Foundation and Team Gleason said in a statement, “Our organizations have been on a mission to create a world free of ALS. With today’s approval, we are encouraged that RELYVRIO can offer people living with ALS and their families the potential of more time with functional independence. This is especially important for a rapidly progressive disease with a median survival time from diagnosis of just two to three years. This is significant for people living with ALS, their loved ones, caregivers, clinicians, researchers, and advocacy, as we now have a new treatment option that could be a big step forward for the future of ALS care.”

The approval of RELYVRIO is based on data from CENTAUR, a multicenter Phase 2 clinical trial in 137 participants with ALS encompassing a 6-month randomized, placebo-controlled phase and an open-label extension (OLE) long-term follow-up phase. Detailed data from CENTAUR were published in the New England Journal of Medicine, Muscle & Nerve, and the Journal of Neurology, Neurosurgery, and Psychiatry.

The most common adverse events occurring with RELYVRIO (at least 15% and at least 5% greater than placebo) were diarrhea, abdominal pain, nausea, and upper respiratory tract infection. Gastrointestinal-related adverse reactions occurred throughout the study but were more frequent during the first three weeks of treatment.

“Any time we have a new tool to slow the progression of this disease represents an important milestone in how we battle ALS. The published data on both function and survival in a randomized trial – and what this means for people living with ALS – are a step forward for the ALS community,” said Sabrina Paganoni, M.D., Ph.D., principal investigator of the CENTAUR trial, investigator at the Sean M. Healey & AMG Center for ALS at Massachusetts General Hospital, and Associate Professor of Physical Medicine and Rehabilitation at Harvard Medical School and Spaulding Rehabilitation Hospital.

“The approval of a new treatment that helps slow the progression of ALS, preserve physical function and potentially extend survival has the potential to greatly impact the hundreds of people living with ALS who I currently treat,” said Merit Cudkowicz, M.D., co-principal investigator of the CENTAUR trial and co-founder of the Northeast ALS Consortium, Chief of Neurology and the Director of the Healey & AMG Center for ALS and Chief of Neurology at Massachusetts General Hospital, and the Julieanne Dorn Professor of Neurology at Harvard Medical School. “There are too few options to target this uniformly fatal and rapid illness, and I am encouraged at this outcome and what it represents for my patients and their families.”

“Our priority now is to ensure that adults living with ALS in the U.S. whose doctors have prescribed RELYVRIO can access it as quickly as possible,” said Margaret Olinger, Global Head of Commercial and Chief Commercial Officer of Amylyx. “Physicians will be able to prescribe immediately, and we anticipate specialty pharmacies will be able to start to fill prescriptions and ship RELYVRIO to people with ALS in the next four to six weeks.”

After considering the input of many stakeholders throughout the ALS community in the U.S., Amylyx made the decision to price RELYVRIO below the latest FDA-approved product available to people with ALS. To ensure that every eligible person who can benefit from RELYVRIO will have access, Amylyx will provide support to healthcare professionals, people living with ALS, and their loved ones through the Amylyx Care Team (ACT) Support Program. ACT provides people living with ALS who have been prescribed RELYVRIO, and their loved ones, with a dedicated, single point of contact to guide their treatment journey. ACT works tirelessly to aid with navigating through insurance in an effort to overcome potential barriers to access. ACT helps confirm coverage and provides financial assistance options to eligible individuals with out-of-pocket costs. ACT also provides education, support, and resources to help adults living with ALS get started and continue with RELYVRIO treatment, as prescribed by their healthcare provider. People with ALS, their caregivers, and healthcare professionals in the U.S. can now call 1-866-318-2989 or email amylyxcareteam@amylyx.com to speak with an ACT team member.