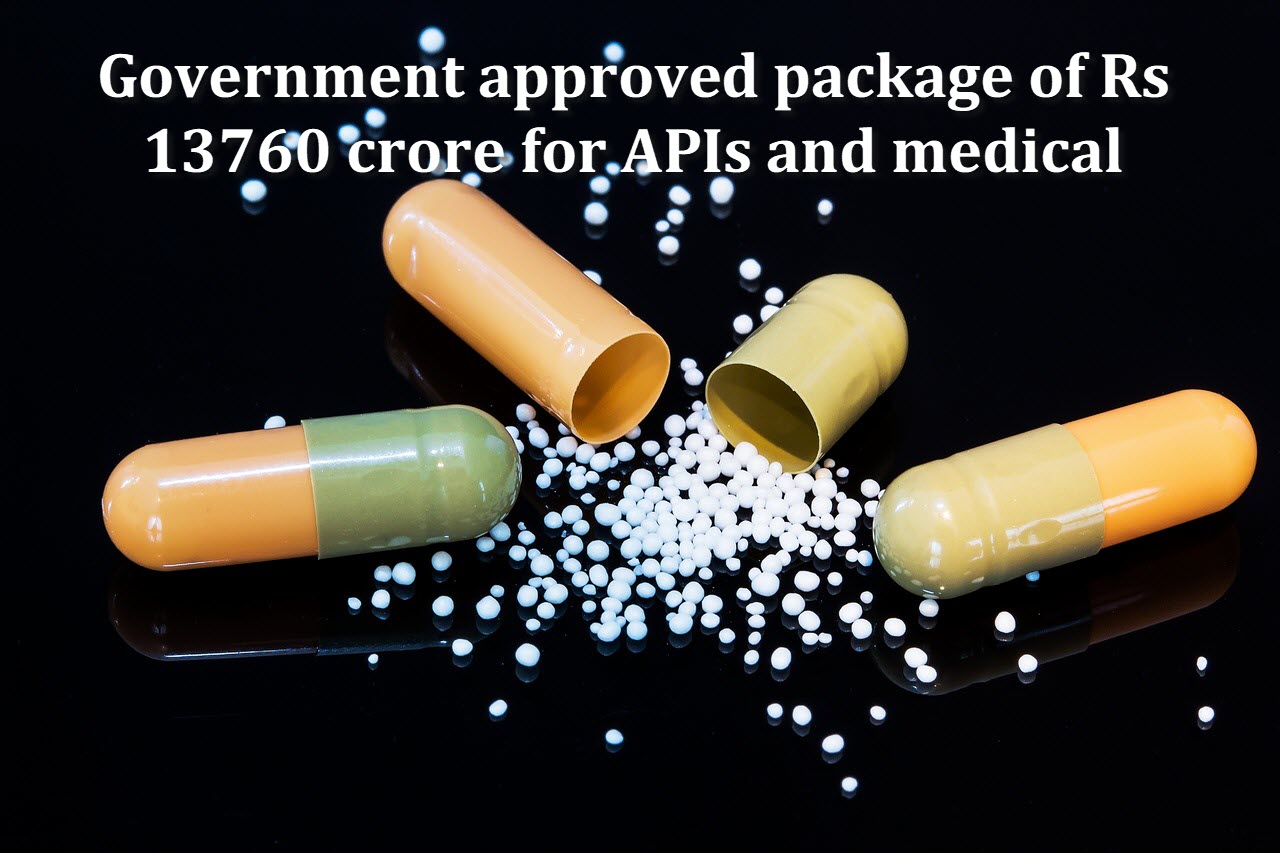 The cabinet has approved four schemes which totally include Rs 13,760 crore to promote the domestic production of active pharmaceutical ingredients (APIs) and medical devices in the country and their exports.

Mansukh Madaviya, Minister of State for Chemicals and Fertilisers reported that the Cabinet has approved 4 schemes with an incentive outlay of Rs. 9940 crores and Rs. 3820 crores for Bulk Drugs and Medical Devices respectively, to boost their domestic production and  for promotion of make in india and exports while substituting their Imports.

The scheme on Promotion of Bulk Drug Parks for financing Common Infrastructure Facilities in 3 Bulk Drug Parks with financial implication of Rs. 3000 crore for next five years. And Production Linked Incentive (PLI) Scheme for promotion of domestic manufacturing of critical KSMs/Drug Intermediates and APIs in the country with financial implications of Rs. 6940 crore for next eight years which totally makes Rs. 9940 crores.
Where as, 4 medical devices park will receive Rs. 400 crore and And PLI Scheme for promotion of medical devices Rs 3420 crore.

The PLI scheme intends to boost domestic manufacturing of critical KSMs/Drug Intermediates and APIs by attracting large investments in the sector to ensure their sustainable domestic supply and thereby reduce India's import dependence on other countries for critical KSMs/Drug Intermediates and APIs. It will lead to expected incremental sales ofRs. 46,400 crore and significant additional employment generation over 8 years.

The scheme will be implemented through a Project Management Agency to be nominated by the Department of Pharmaceuticals. The Scheme will be applicable only for manufacturing of 53 identified critical bulk drugs (KSMs/Drug Intermediates and APIs).

The scheme is expected to reduce manufacturing cost of bulk drugs in the country and dependency on other countries for bulk drugs.

The Indian pharmaceutical industry is the 3rd largest in the world by volume. However, despite this achievement, India is significantly dependent on import of basic raw materials, viz., Bulk Drugs that are used to produce medicines. In some specific bulk drugs the import dependence is 80 to 100%.  Continuous supply of drugs is necessary to ensure delivery of affordable healthcare to the citizens. Any disruption in supplies can have significant adverse impact on Drug Security, which is also linked to the overall economy of the country. Self-sufficiency in manufacturing of bulk drugs is highly required.