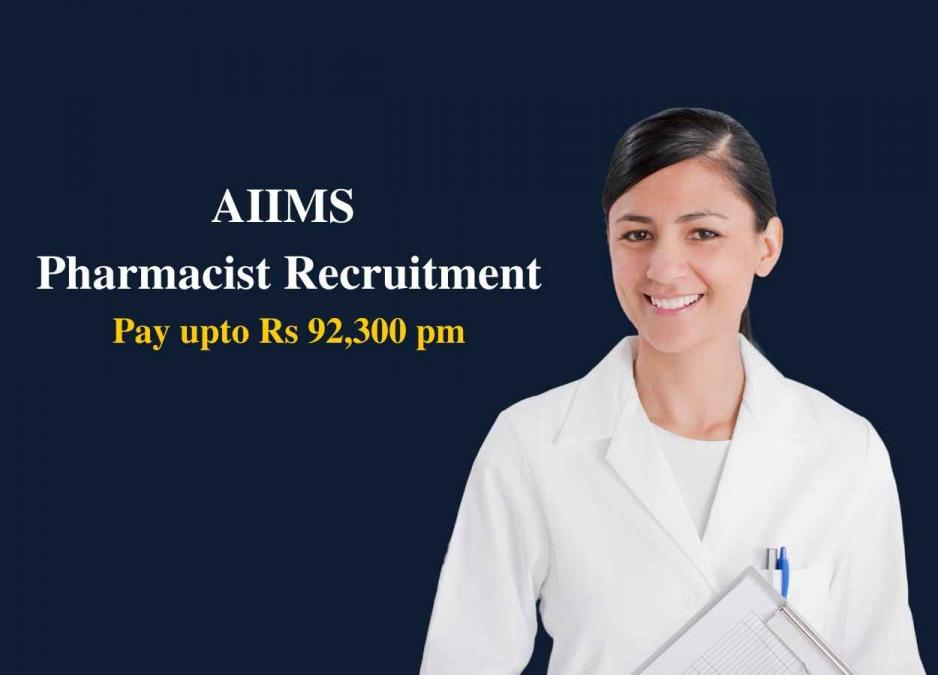 All-India Institute of Medical Sciences was established as an institution of national importance by an Act of Parliament with the objects to develop patterns of teaching in Undergraduate and Post-graduate Medical Education in all its branches so as to demonstrate a high standard of Medical Education in India; to bring together in one place educational facilities of the highest order for the training of personnel in all important branches of health activity; and to attain self-sufficiency in Post-graduate Medical Education.

Eligibility Criteria : Deputation (including short term contract)/absorption: Pharmacist or Compounders or Nursing Assistants of the Central Government or State Government or Defence Service holding analogous post on regular basis in the parent cadre or department and possessing the following educational qualifications: (1) 12th pass in science from a recognized Education Board; and (2) Diploma in pharmacy from a recognized institution registered under Pharmacy Act Of 1948 (8 of 1948)

Place of Posting : Tinsukia, Assam (With all India transfer liability)

General Instructions
1. The no of posts are subject to change. Further, depending on the specific organizational requirements, the Department retains the right to shortlist only those applications that are in conformity with its specific requirements as may exist at a relevant point of time.
2. The deputation will initially be for a period of three years. The term of deputation will be governed as per DoP&T OM 6/6/2009~Estt (Pay 11) dated 17 June, 2010 & 2/6/2016-Estt (Pay II) dated 17.02,2016 and amendment thereto from time to time.
3. The deputation tenure of defence service personnel will be as prescribed by Ministry of Defence from time to time
4. The Central or State Government officials as specified above for deputation shall only be considered for absorption
5. The officials on deputation will be eligible for 20% security allowance on the Basis pay along with other allowances as admissible to Central Government employees,
6. The departmental officials who are in the direct line of promotion will not be eligible for consideration for appointment on deputation. Similarly, deputationists shall not be eligible for consideration for appointment by promotion
7. Period of deputation including the period of deputation in another ex-cadre post held immediately preceding this appointment in the same or other organizations or department of the Central government shall ordinarily not exceed three years.
8. The maximum age limit for appointment by deputation shall not exceed fifty-six years as on closing date of receipt of applications.

9. The officials who are appointed on deputation can be posted anywhere in India as per requirement of the organization
10. The initial period of deputation of the official from Central Government shall normally be three years which may extended as per rules.
11. The last date of receipt of applications is 60 days from the date of issuance of the circular.
12. Attested copies of educational qualification, experience and other certificates should be enclosed with the application. Candidates however, will be required to produce original certificates for verification at the time of personal interaction to be held with the candidate.
13. Incomplete applications and those received late and / or without the requisite enclosures would be summarily rejected. No correspondence in this regard would be entertained.
14. Canvassing in any form will disqualify the candidature.
15. The Department reserves the right to modify / withdraw the notification at any time.

How to apply : Neatly filled application typed or in own handwriting on A-4 size paper in proforma (placed as Annexurel) should be forwarded through proper channel on the following address. The envelope should clearly mention on top " Application for deputation for the post of ( Name of Post):-  Assistant Director (Pers.D), Post Box No.3003 Lodhi Road Post Office New Delhi-110003