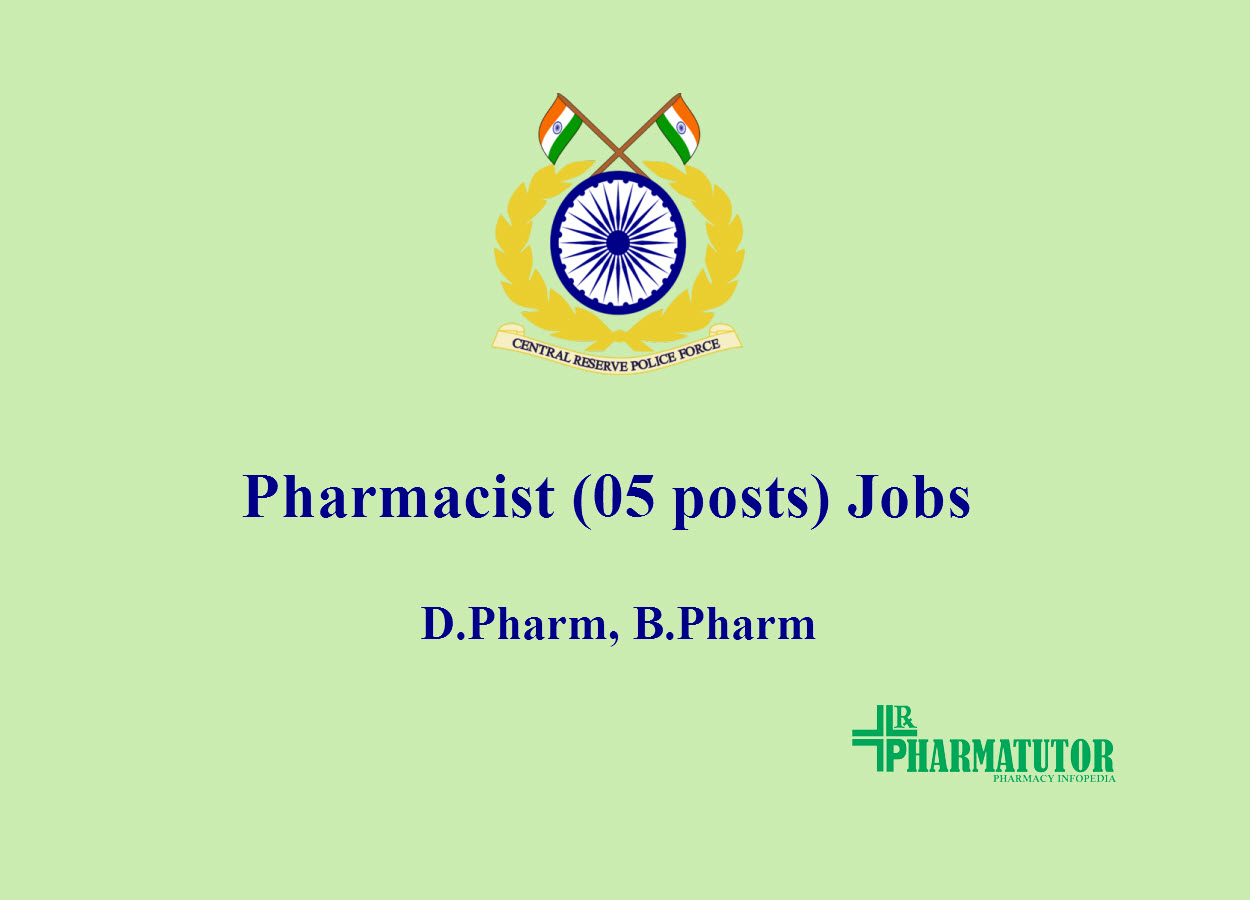 The Central Reserve Police Force (CRPF) is the premier central police force of the Union of lndia for intenal security. Originally constituted as the Crown Representative Police in 1939, it is one of the oldest Central para military forces (now termed as Central Armed Police Force). CRPF was raised as a sequel to the political unrest and the agitations in the then princely States of India following the Madras Resolution of the All-lndia Congress Committee in 1936 and the ever-growing desire of the Crown Representative to help the vast majority of the native States to preserve law and order as a part of the imperial policy.

Age : Below 50 Years as on date of Walk-ininterview.

Medical Standard : Should be Medically fit to perform duties of Pharmacist in CRPF

Terms & conditions for engagement of Para medical staff on contractual/hiring basis are as under :-
a) Candidate will opt the option for selection for the post applied either on contractual or on hiring basis.
b) He/She will perform the duties of the appointed post under the guidance and supervision of Medical Officer /In-charge of Hospital.
c) The paramedical staff so engaged either on contractual or on hiring basis will regularly attend the Unit Hospitals/Composite Hospitals/Training Institutions from 0900 hours to 1800 hours or working hours of the institution where he/she is being employed in any emergency, if services required can be taken beyond prescribed time.
d) He/She will be paid a consolidated remuneration as per the rates/remuneration as advertised. These paramedical staff appointed on contractual/hiring basis will not be entitled for any other allowances, benefits or concessions as admissible to regular Govt. employees.
e) The contractual paramedical staff appointed will be engaged for 06 months initially.


f) No TA/DA and boarding / lodging will be provided during walk-in-interview.
g) No TA/DA will be paid during the period of engagement in CRPF on contractual basis/hiring basis.
h) No transportation will be provided during the period of engagement in CRPF.
i) He/She will be authorized for 2 & 1/2 days E/L per month as per CCS Leave Rules 1972 for contractual Employee. After exhausting admissible leave, if leave availed with permission of competent authority, it would be treated as unpaid leave. If absent without sanctioned leave it will be treated as unpaid leave and indiscipline on the part of individual.
j) During the continuance of contract period he/she will be subject to follow the standard of discipline of the force and will execute the orders of administrative authority either written or verbal.
k) During the period of contract if he/she will fails to deliver in terms of quality and norms specified or due to any other reason, their services can be terminated at any time by giving 01 months notice.
l) He/she will not claim to regular absorption either during the period of contract or after completion of the period.


While appearing for Walk-in-interview, the candidates should bring documents in original & photocopies of all relevant documents (Degree, Age Proof & Experience Certificate etc.) application in plain paper superscripting the name of post applied for & five passport size recent photographs. Interview will be followed by Medical Examination.

See All    Other Jobs in our Database