Materials and Methods
Olmesartan medoxomil (OM) was kindly supplied by Lupin Limited (Aurangabad). All chemicals and reagents were analytical grade, methanol and acetonitrile (Merck, India). A Thermospectronic UV1, UV-Vis double beam spectrophotometer was used for all absorbance measurements. Literature suggests that olmesartan medoxomil has very poor water solubility. (Braggio S et al., 1988). Different kinds of solvents were tried to find the optimum conditions to perform the method. Since OM is sparingly soluble in water at room temperature, organic solvents such as sodium lauryl sulphate (SLS), methanol (MeOH) and acetonitrile (ACN) were used to dissolve OM. When MeOH was used, OM could not preserve its stability at room temperature although prevented from daylight. The solubility study conducted revealed that olmesartan medoxomil has appreciable solubility in 0.1% sodium lauryl sulphate.

Accurately weighed 100 mg of olmesartan medoxomil was dissolved in 100 ml solution of 0.1% sodium laural sulphate, to obtain a working standard of 1000 µg/ml. 100µg/ml solution was made by taking 10 ml from the above solution and make up the volume with distilled water upto 100 ml, this was 100 µg/ml. All the further dilutions ranging from 15-55 µg/ml were made by dilution with distilled water. Aliquots of solution ranging from 15-55 ml. were transferred into a series of volumetric flasks and the volume was made up to 10 ml with distilled water. The individual samples were scanned from 200-300nm, the maximum absorbance (λmax) was observed at 258 nm. 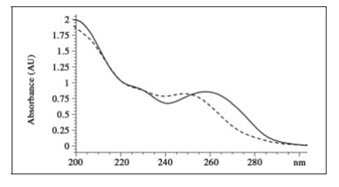 The results of analysis of pharmaceutical formulation of olmesartan medoxomil are presented in Table-2. An accurately weighed tablet powder of olmesartan medoxomil equivalent to 100 mg of pure drug was dissolved in 100 ml methanol. This solution was filtered using Whatmann filter paper No. 41 and further diluted with 0.1% sodium lauryl sulphate to obtain the concentration of 50 µg/ml. Recovery studies were carried out to established the validity and reproducibility of the developed method. Known amount of pure drug was added to the previously analyzed tablet sample and mixtures were analyzed tablet sample and mixtures were analyzed by the proposed method. (Ermer J and Ploss HJ 2005).