ABSTRACT
Paracetamol belongs to the class of antipyretic and analgesic. Various brands of some dosage forms are available in the market with a common claim that they are all bioequivalent. The main objective of the present experiment was to evaluate post compression parameters of various brands of paracetamol tablets containing 650 mg of drug and to determine whether all the formulations used were equivalent or significantly different. Paracetamol of 650 mg standard tablets from different manufacturers were selected in the studies. The post compression parameters like weight variation, friability, hardness, weight variation, disintegration, dissolution profiles were found to be varying but within the prescribed limit.

INTRODUCTION
Paracetamol is a non steroidal anti-inflammatory drug .It is prominently used as antipyretic and anodyne(analgesic), In treatment of fever, pain ,headache and such other  discomfort. Its chemically familiar as acetaminophen i.e., (4- hydroxy acetanilide). It is also given in combination with many cold medication, also in cancer pains and to reduce the pain after surgery. It is predominantly safe in normal doses, higher doses causes hepatic disorders.(Nayak AK 2010)

Evaluations of different parameters like, hardness, friability, weight variation ,disintegration time dissolution profile were performed. Therapeutic effectiveness  and bioavailability  of tablet depends on these parameters(Kar A et al.,2015)(D.R.Jadge et al., 2014) .Depending on this facts the present study was conducted to compare the quality standards of different commercially available paracetamol 650 mg tablets. 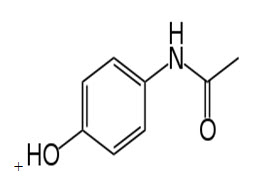 Fig No: 1- Chemical Structure of paracetamol4

POST COMPRESSION EVALUATION PARAMETERS
WEIGHT VARIATION
This is an important in process quality control test ,which has to be checked  frequently (every half  hour ). Corrections are made during the punching of tablet if necessary. Any variation in the weight of tablet (for any reason )leads to either under medication or overdose .This is particularly true when the drugs are potent or low  dose  drugs .All tablet machines have provision to receive a known quantity (volume which is correlated to weight )of granules. Improper  flow  of granules from the hopper into the die is responsible for weight variation . The range of variation is 10 % for tablets weighing less than 80 mg, 7.5% for tablets weighing in the range of 80 to 250 mg, 5.0 %  for tablets weighing above 250 mg. For paracetamol the deviation allowed is 5 %.

FRIABILITY
Friability is the loss of weight of tablet in the container/ package ,due to removal of the particles from the surface .This in process quality control test is performed to ensure the ability of tablets to withstand the shocks during processing (coating and strip.- packaging ) handling  ,transportation  and  shipment(Rahman Z U et al.,2013)(Binega G et al.,2013). The friability of  tablets is indicated by chipping, capping, breaking. The extent of friability is less than 0.8% .This limit is strictly adhered when the tablets are further processed for coating.

HARDNESS
Hardness is a force required to break a tablet across the diameter. The hardness of the tablet is an indication of its strength. This is a valuable test which might influence tablet disintegration and dissolution rate.

DISINTEGRATION
Disintegration is defined as that state in which any residue of tablet except fragments of insoluble coating ,remaining on the screen  of the test apparatus consisting of a soft mass having no palpably firm unmoistened  core .Disintegration process involves the breaking of tablet into small particles .The quicker the disintegration the faster could be the action .disintegration roughly indicates the possible  pattern of dissolution of active substance . hence the experimental conditions closely mimic the situation that a tablet  encounters in GI tract , in terms of temperature ,ph  and mechanics.

DISSOLUTION
Dissolution is defined as “the amount of drug substance that goes into solution per unit time under standardized conditions of liquid/solid interface, temperature and solvent composition” . Dissolution is conducted to know the minimum time taken by the drug  to  dissolve itself in the systemic circulation and starts its action in the body. There are 2 methods of to know the dissolution rate,
1.In vitro studies
2. In vivo studies .

In the pharmaceutical industry, drug dissolution testing is routinely used to provide analytical in vitro drug release erudition for both quality control scheme, i.e., to compute batch-to-batch consistency of solid oral dosage forms such as tablets and drug reinforcement, i.e., to anticipate in vivo drug release profiles. It serves as are presentative factor  for   bioavailability and bioequivalence.
Hence comparative dissolution studies of various commercially marketed paracetamol products. paracetamol tablets of 650mg  were selected . 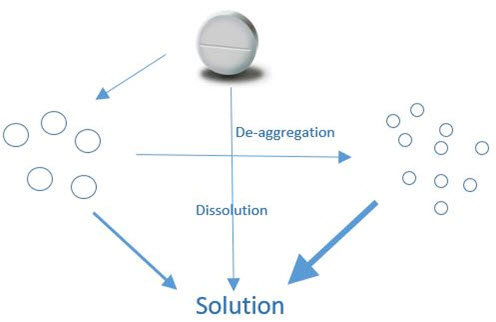 Applications of dissolution
1) Dissolution test is used as a quality control tool to scrutinize   habitually the uniformity  and reproducibility of production batches.   In case , a single point determination i.e.,  a certain percentage of the drug dissolved (released) in a given time  interval is usually a sufficient control parameter.(Siew A 2016)
2) Dissolution test is used as a exploration  tool for  augment  the parameters  and ingredients  in a new   formulation. Commonly multi point  determination is employed .
3) However in vitro and in vivo co-relations are surveyed ,there the dissolution   studies are used as means to surrogate the recurring studies of absorption .Normally multipoint  determination  is selected.

These are fixed in order to mimic the dissolution in the biological system. When the test is used as quality control tool ,a rapid method is desirable .Accordingly experimental conditions are fixed.

HARDNESS
The hardness of tablet is tested using the Monsanto hardness  tester . The tester is placed across the diameter in between the spindle and the anvil . the knob is adjusted to hold the tablet in position .The  reading of the pointer is adjusted to zero . the pressure is increased slowly to break  the tablet . “Hardness factor” -  the average of the several determination is determined and reported

DISSOLUTION
Various marketed paracetamol tablets containing 650 mg of drug was purchased from local pharmacy in Davanagere. All the other ingredients are of analytical grade.

PROCEDURE
The dissolution method is a kinetic method .i.e., periodical samples are withdrawn for the determination
1) Phosphate buffer solution pH 7.8(900ml ) is measured and transferred into the dissolution flask.
2) The temperature is maintained at 37±0.50 C.
3) Various  marketed paracetamol tablet containing 650 mg drug  is placed at the bottom of the jar.
4) The paddle is rotated at 50 rpm .
5) Five ml of sample is withdrawn at 0 min and transferred  into the test tube  appropriately labeled. Immediately 5ml of phosphate  buffer solution pH 7.8 is replaced into the dissolution flask .
6) Similarly samples are collected at 1,2,3,4,5,6,7,8,9,10 min intervals. A 5 ml of fresh dissolution medium is replaced in the flask whenever the sample is withdrawn .
7) All samples are filtered using wattman filterpaper .
8) The absorbance at 249 nm is measured in uv spectrophotometer  using the phosphate buffer solution as a blank.
9) The absorbance are recorded in the table and further calculations are done
10) A graph is plotted by taking cumulative percent of drug dissolved on y-axis and time on x-axis . 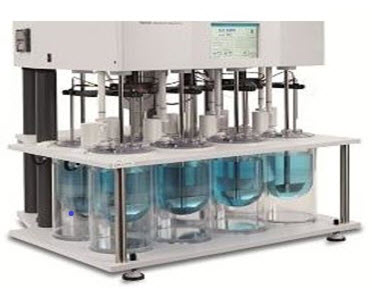 WEIGHT VARIATION : The weight variation of various brands of paracetamol are shown below in table no :1

FRIABILITY : The friability of various brands of paracetamol are shown below in the table no 2

DISINTEGRATION: The disintegration of various brands of paracetamol is shown below in table no :3

Table No 3- Disintegration data of studies of marketed paracetamol products

HARDNESS :
Hardness of various marketed brands of paracetamol are shown below in table no :4

DISSOLUTION
The dissolution profile of marketed tablets like Medomol 650, Paracip 650, P-650, Crocin 650 and Paracetamol 650 mg (Janaushad) are listed in the following table. 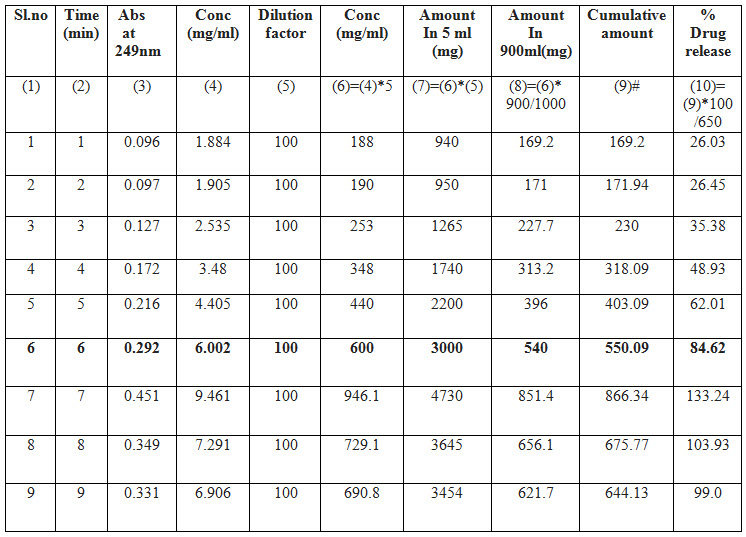 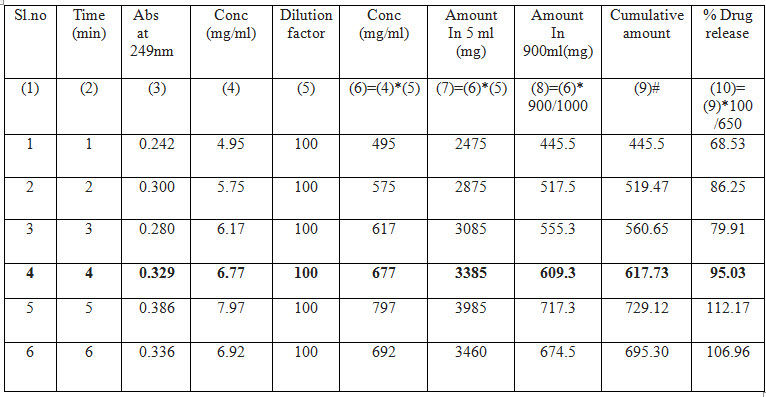 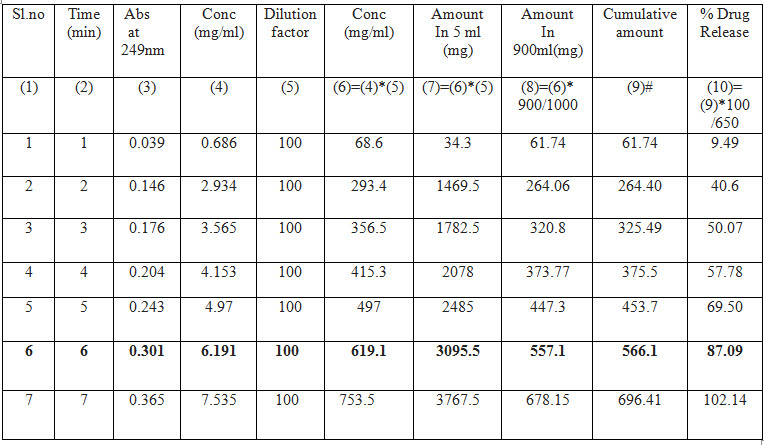 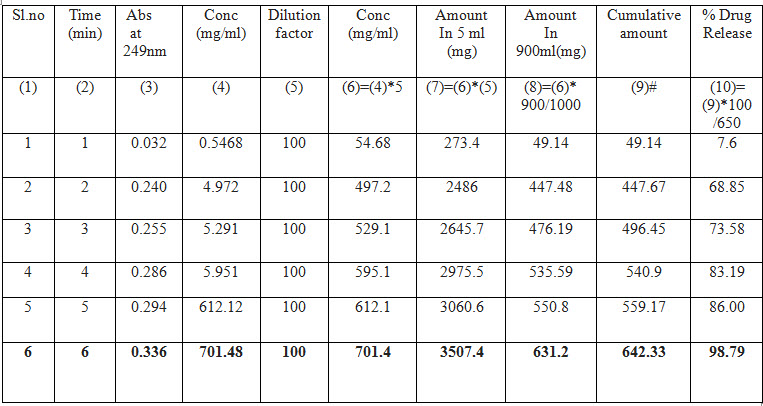 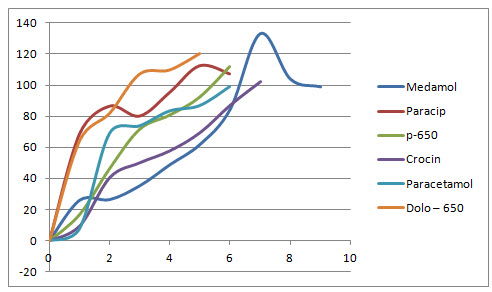 CONCLUSION
As a result of this study we have concluded that all the six brands of Paracetamol tablets meet the criteria laid in the official monographs and though they differ slightly in terms of various parameters like weight variation, hardness, friability,  shows its complete  release   at in the range of 4 to 7 mins .All marketed paracetamol tablets of 650 mg were all under specified IP limits.