ABSTRACT:
The oral route of drug delivery is typically considered the preferred and most patient-convenient means of drug administration. With many drugs the basic Goal of therapy is to achieve a steady-state blood or tissue level that is therapeutically effective and nontoxic for an extended period of time. Sustain release system are considered a wiser approach for the drugs with short half-lives and which require repeated dosing, they are easy to formulate and are irrespective of absorption process from gastrointestinal tract after oral administration. The basic objective of these dosage forms is to optimize the delivery of medications so as to achieve a measure of control on therapeutic effect in the face of uncertain fluctuations in the in vivo environment in which drug release takes place. The advances in the formulation technology of modified release dosage form with sustained release oral dosage form has been widely accepted approach as compared to conventional immediate release formulations of the same drug, over which it provides a prolong release of the drug over extended period of time there by giving the better patient compliance and enhanced bioavailability and resulting blood concentration-time profiles of drugs that otherwise suffer from few limitations.

INTRODUCTION: -
Traditional drug delivery system has been characterized by immediate release and repeated dosing of the drug which might lead to the risk of dose fluctuation, this arises the need of a formulation with control release that maintain a near-constant or uniform blood level. The desire to maintain a near-constant or uniform blood level of a drug often translates into better patient compliance, as well as enhanced clinical efficacy of the drug for its intended use.

Drawbacks of Conventional Dosage Forms: -
1. Poor patient compliance, increased chances of missing the dose of a drug with short half-life for which frequent administration is necessary.

2. The unavoidable fluctuations of drug concentration may lead to under medication or over medication.

4. The fluctuations in drug levels may lead to precipitation of adverse effects especially of a drug with small Therapeutic Index (TI) whenever over medication occur.

Sustained release concept: - Sustained release, sustained action, prolong action, controlled release, extended action, depot are terms used to identify drug delivery systems that are designed to achieve prolong therapeutic effect by continuously releasing medication over an extended period of time after administration of single dose. In the case of orally administer this period is measured in hours while in the case of injectables this period varies from days to months.

Advantages of sustained release dosage forms:-
1. Control of drug therapy is achieved.
2. Rate and extent of drug absorption can be is modified
3. Frequency of drug administration is reduced.
4. Patient compliance can be improved.
5. Drug administration can be made convenient
6. Maximizing the availability of drug with minimum dose.
7. The safety margin of high potency drug can be increased.

Disadvantages of sustained release dosage forms: -
1. It not permits prompt termination of therapy.
2. Less flexibility in dose adjustment.
3. These dosage forms are designed on the basis of average biological half life.
4. They are costly.

Pharmacokinetic parameters for drug selection
1. Elimination half-life preferably between 2 to 8 hrs
2. Total clearance should not be dose dependent
3. Elimination rate constant required for design
4. Apparent volume of distribution (Vd) The larger Vd and MEC, the larger will be the required dose size
5. Absolute bioavailability should be 75% or more
6. Intrinsic absorption rate must be greater than release rate
7. Therapeutic concentration Css The lower Css and smaller Vd, the loss among of drug required.
8. Toxic concentration Apart the values of MTC and MEC, safer the dosage form. Also suitable for drugs with very short half-life.

A) Pharmacokinetics and pharmacodynamics factor:
1. Biological half-life
Drug with biological half-life of 2-8 hours are considered suitable candidate for sustain release dosage form, since this can reduce dosing frequency. However this is limited in that drugs with very short biological half lives may require excessive large amounts of drug in each dosage unit to maintain sustained effects, forcing the dosage form itself to become limitingly large.

2. Absorption
Rate of absorption of a sustained formulating depends upon release rate constant of the drug from the dosage form, and for the drugs that are absorbed by active transport the absorption is limited to intestine.

3. Distribution
The distribution of drugs into tissues can be important factor in the overall drug elimination kinetics. Since it not only lowers the concentration of circulating drug but it also can be rate limiting in its equilibrium with blood and extra vascular tissue, consequently apparent volume of distribution assumes different values depending n the time course of drug disposition. Thus for design of sustain release products, one must have information of disposition of drug.

4. Metabolism
The metabolic conversion to a drug is to be considered before converting into another form. Since as long as the location, rate, and extent of metabolism are known a successful sustain release product can be developed.

1. Dose size
A dose size of 500-1000mg is considered maximal for a conventional dosage form. This also holds true for sustain release dosage forms. Since dose size consideration serves to be a parameter for the safety involved in administration of large amounts with narrow therapeutic range.

2. Ionization, pka and aqueous solubility
Most drugs are weak acids or bases and in order for a drug to get absorbed, it must dissolve in the aqueous phase surrounding the site of administration and then partition into the absorbing membrane.

4. Drug stability
When drugs are orally administered, they come across acid-base hydrolysis and enzymatic degradation. In this case, if the drug is unstable in stomach, drug release system which provides medication over extended period of time is preferred, whereas in contrast the drug unstable in intestine will face problem of less bioavailability 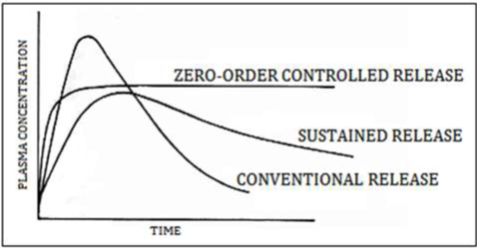 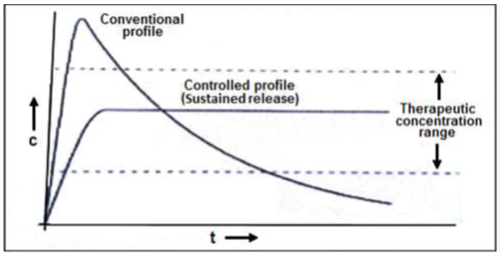