Strain SPKD15 (streak plate culture) after being exposed to UV for 30 minutes, was subsequently sub-cultured and the sub-culture was used to extract antimicrobial. The antimicrobial thus obtained was tested against various test organisms and compared with the activity of antimicrobial obtained from the original strain SPKD15. The results of the tests are mentioned in Table.2.

Table-2. Comparison of activity of antimicrobials produced from normal and UV exposed strain 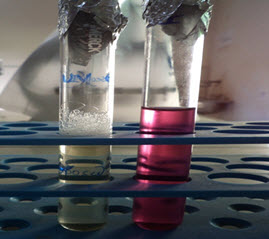 The loss in coloration is possibly due to the degeneration of the prodiogisin pigment which may be due to alterations in the biochemical pathway leading to formation of the pigment. The positive aspect from this experiment was that the streak plate culture (strain SPKD15) after being exposed to UV for a long duration of 30 minutes was still able to grow on fresh nutrient media upon sub-culturing.

Environmental conditions are rarely stable and more often fluctuate between the optimum and adverse limits. Thus, the need to study the effect of various environmental parameters on a pathogenic microbe like Serratia marcescens arises. Such a study not only confirms the degree of resistance of the pathogenic bacteria, but also indicates towards possible evolution it can undergo over a period of time acquiring even more resistance. Several experiments on the impact of fluctuating environments on microbes such as pH (Hughes et al., 2007), temperature (Ketola et al., 2013), NaCl concentration (Rjazantseva et al., 1994) have been carried out earlier.  The bacterium is able to grow at high temperatures, pH, salt concentration and can also resist UV for an extensive period. The bacterial strain survived up to 40°C and the optimum temperature for prodigiosin production was found to be 28°C. However the pigment formation ceased at 35°C. A similar result was also obtained by Andreeva et al. (Andreeva et al., 1999). The loss of pigmentation at higher temperatures may be due to the denaturation of heat sensitive enzymes involved in formation of the pigment.  Similarly, the optimum pH for the production of prodiogisin was found to be at near about neutral which was confirmed by the intense coloration of the bacterial colony. However, further increase in alkalinity or acidity of the media lead to gradual loss of the pigments followed by loss of cell viability. This leads to the assumption that the pigment synthesis is somewhat responsible for imparting bacterial resistance towards fluctuations in pH. The isolated bacterial strain (SPKD15) could easily survive up to 6% NaCl concentration, very similar to the result obtained by Singh and Jha who demonstrated the growth of Serratia marcescens (CDP-13) at a higher NaCl concentration and application of the same to enhance the growth of wheat plant under salinity stress conditions (Singh and Jha, 2016).  However, the cells of the bacterial strain (SPKD15) almost lost their ability to form pigments at a pH of 3 – 4, which is in quite contrast to the results obtained by Rjazantseva et al. showing late synthesis of pigments at low concentration of NaCl and higher accumulation of the prodiogisin pigment up to 5% w/v NaCl concentration (Rjazantseva et al., 1994). The probable reason for such conflicting results may be attributed to the difference in strain. It may be concluded that the activity of Serratia marcescens towards high salt concentration may vary from strain to strain. Strain SPKD15 was able to survive an extensive period of UV exposure of up to 120 seconds; however the production of prodiogisin was highly affected after 15 seconds of exposure. According to some researchers the higher resistance of S.marcescens to radiations is mainly due to the presence of red colored pigment called prodiogisin, which is somewhat structurally similar to that of melanin (Bartlett et al., 1970; Webb et al., 1971). However, on the other hand it has been observed that there is no significant effect of resistance between pigmented and non-pigmented cultures of S.marcescens towards UV as confirmed by Zion et al (Zion et al., 2006). The survival ability of S.marcescens under prolonged exposure to UV may be attributed to the presence of efficient DNA repair mechanism in the bacteria. At certain point the damage due to UV radiation may reach a certain critical level beyond which the DNA repair mechanism may not be able to work properly, thus leading to loss of cell viability. The mutations to the DNA may also impact the production of prodiogisin adversely by blocking the pigment production pathway.The decreased activity of the antimicrobial produced from the UV exposed strain may be attributed to the possible mutations to specific genes or blockage of pathway that leads to production of prodiogisin. The pigment prodiogisin is well known to have certain antimicrobial activity and hence, its degeneration or lack of synthesis may reduce the intracellular antimicrobial property. The bacteria although lacks prodiogisin after exposure to UV and sub-culturing, but still exhibits certain antimicrobial activity. This reflects that prodiogisin is not the only factor behind the antimicrobial property but some other factors must be contributing to the same cause.

All the experiments carried out signify the tolerance of Serratia marcescens (SPKD15). It is not only resistant to certain antibiotics as studied earlier (Cooksey et al., 1975; Sleigh, 1983) but also is highly resistant to drastic environmental stress.The survival of the bacterium may be due to the prodiogisinpigment, which may act as a shield and protect the bacteria from harsh environmental conditions. The logic applied behind such interpretation is that the bacterium loses the pigment forming ability under harsh environmental conditions at first, followed by the loss of viability. Hence, the pigment prodiogisin is thought to act as the first line of defense for the bacterium under drastic environmental stress. Besides, the bacterium is assumed to pose efficient DNA repair mechanism which also is an added benefit for its survival. The resistance of this particular species to such stress conditions makes it even more notorious as a pathogenic organism.

CONCLUSION
Serratia marcescens already known for its pathogenicity is highly resistant to large classes of antibiotics. The study reveals the resistance of the bacteria towards various environmental stress conditions. The bacteria are able to survive at high levels of temperature, salt concentration, pH and extended duration of UV exposure. The high level of tolerance exhibited by the isolated strain makes it difficult for proper treatment of infections caused by it. This demands new insights for further research in the field to make out possible ways for efficient eradication of the pathogenic bacteria.