RESULTS AND DISCUSSIONS
The present study reveals the resistance of Serratia marcescens SPKD15 to various environmental stress conditions. The isolated strain was found to be gram negative rod shaped bacterium (Fig.1) and was confirmed to the genus level by API 20E test (Table-1 and Fig.2) and other biochemical tests conducted. The bacterium isolated was confirmed to belong to the genus Serratia. The species was confirmed after 16S sequencing of the rRNA and the partial sequence (868 bp) was submitted to the NCBI genbank (accession no. KR422622). The strain was named as SPKD15
. 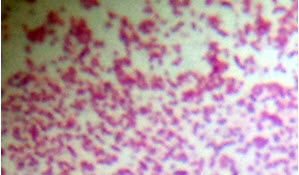 ( + denotes positive result and - denotes negative result)
The antibiogram report (Fig.3) generated by the ABIS Online Antibiogram software indicated that the strain is susceptible to only one of the antibiotic whereas it is resistant to the other three. The strain SPKD15 was susceptible to Imipenem (10µg) belonging to the group Carbapenems, while resistance was observed towards antibiotics belonging to the group – Penicillins (Piperacillin 100µg), Beta-lactams (Amoxyclav 20+10µg) and Cephems (Cefoxitin 30µg).

Experiments carried out to study the effect of environmental stress factors (temperature, salt concentration, pH and exposure to UV) provided some interesting results. Serratia marcescens SPKD15 was found to be able to survive to an extent of 40°C, but the production of prodigiosin ceased beyond the temperature of 35°C. Although the bacteria lose its ability to produce colored pigment but still it can survive up to appreciably high temperatures. At 41°C almost 90-95 % of the bacterial cells did not survive, whereas 100% of the cells were able to produce prodigiosin at 28°C and approximately 80% of the cells produced the pigment at 30°C. Thereafter there was a sharp decline in the ability of cells to produce prodigiosin and approximately 88% of the colonies lose their ability to produce the pigment at 35°C. At a temperature of 37°C, all the bacterial colonies were devoid of the pigment (Fig.4).

Fig.5. Effect of NaCl concentration on viability and prodiogisin production in SPKD15

The strain SPKD15 was able to withstand a wide pH range from 5 to 9, whereas the cells were able to produce the pigment from pH 5 to 8. The optimum pH for production of prodiogisin was found to vary within 6-7 (Fig.6).

Serratia marcescens SPKD15 when exposed to 254 nm UV was able to survive the same up to maximum of 2 minutes duration. The pigment production capacity however was affected after exposure for 15 seconds and was completely ceased after 15 seconds of exposure (Fig.7).