ABSTRACT
Niosome are non-ionic surfactant vesicles obtained by hydrating mixture of cholesterol and nonionic surfactants. It can be used as carriers of amphiphilic and lipophilic drug. In niosomes drug delivery system, the medication is encapsulated in a vesicle. Niosomes are biodegradable, biocompatible non-immunogenic and exhibit flexibility in their structural characterization. The main object of this review the application of niosome technology is used to treat a number of diseases, niosome have good oppurnity in research and beneficial for researcher and pharma industries.  Niosome appears to be a well preferred drug delivery system over liposome as niosome being stable and economic. Also niosomes have great drug delivery potential for targeted delivery of anti-cancer, anti-infective agents. Drug delivery potential of niosome can enhances by using novel drug delivery concepts like proniosomes, discomes and aspasome. Niosomes also serve better aid in diagnostic imaging and as a vaccine adjuvant. Thus these areas need further exploration and research so as to bring out or to make for commercially available niosomal preparation.

INTRODUCTION
Paul Ehrlich, in 1909, initiated the era of development for targeted delivery when he envisaged a drug delivery mechanism that would target directly to diseased cell. Drug targeting can be defined as the ability to direct a therapeutic agent specifically to desired site of action with little or no interaction with non target tissue. In niosomes drug delivery system the medication is encapsulated in a vesicle. (Baillie et al., 1985) The vesicle is composed of a bilayer of non-ionic surface active agents and hence the name niosomes. In niosomes, the vesicles forming amphiphilic is a non-ionic surfactant such as Span – 60 which is usually stabilized by addition of cholesterol and small amount of anionic surfactant such as dicetyl phosphate. (Hunter et al., 1988)

Structure of niosome (Gayatri et al., 2000)
A typical niosome vesicle would consist of a vesicle forming amphiphilic i.e. a non-ionic surfactant such as Span-60, which is usually stabilized by the addition of cholesterol and a small amount of anionic surfactant such as dicetyl phosphate, which also helps in stabilizing the vesicle. 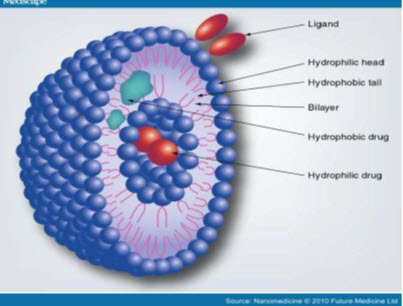 The non ionic surfactants possess a hydrophilic head and a hydrophobic tail.

Preparation methods of niosomes
Ether injection method
The ether injection method is essentially based on slowly introducing a solution of surfactant dissolved in diethyl ether into warm water maintained at 60°C. The surfactant mixture in ether is injected through 14-gauge needle into an aqueous solution of material. Vaporization of ether leads to formation of single layered vesicles. The particle size of the niosomes formed depend on the conditions used the diameter of the vesicle range from 50 to 1000 nm.

Hand shaking method (thin film hydration technique): (Khandare et al., 1994)
In this method the surfactant and cholesterol are dissolved in a volatile organic solvent (such as diethyl either, chloroform or methanol) in a round bottom flask. The organic solvent is removed at room temperature (20°C) using rotary evaporator leaving a thin layer of solid mixture deposited on the wall of the flask. The dried surfactant film can be rehydrated with aqueous phase at 0-60°C with gentle agitation to yield multilamellar niosomes.

Sonication Method
In this method an aliquot of drug solution in buffer is added to the surfactant/cholesterol mixture in a 10-ml glass vial. The mixture is probe sonicated at 60°C for 3 minutes using a sonicator with a titanium probe to yield niosomes.

Micro fluidization method (Rogerson et al., 1988)
Micro fluidization is a recent technique used to prepare unilamellar vesicles of defined size distribution. This method is based on submerged jet principle in which two fluidized streams interact at ultra high velocities, in precisely defined micro channels within the interaction chamber. The impingement of thin liquid sheet along a common front is arranged such that the energy supplied to the system remains within the area of niosomes formation. The result is a greater uniformity, smaller size and better reproducibility of niosomes formed.

Multiple membrane extrusion method
Mixture of surfactant, cholesterol and dicetyl phosphate in chloroform is made into thin film by evaporation. The film is hydrated with aqueous drug polycarbonate membranes, solution and the resultant suspension extruded through which are placed in series for upto 8 passages. It is a good method for controlling noisome size.

Reverse Phase Evaporation Technique (REV) (Biju et al., 2006)
In this method, Cholesterol and surfactant (1:1) are dissolved in a mixture of ether and chloroform. An aqueous phase containing drug is added to this and the resulting two phases are sonicated at 4-5°C. A clear gel is formed which is further sonicated after the addition of phosphate buffered saline (PBS). The organic phase is removed at 40°C under low pressure. The resulting viscous noisome suspension is diluted with PBS and heated on a water bath at 60°C for 10 min to yield niosomes.

Transmembranes pH gradient (inside acidic) Drug Uptake Process: or Remote Loading Technique (Biju et al., 2006)
A solution of surfactant and cholesterol are dissolved in chloroform. The solvent is then evaporated under reduced pressure to get a thin film on the wall of the round bottom flask. This film is hydrated with 300mm citric acid (PH 4.00) by vertex mixing. The resulting multilamellar vesicles are frozen and shared three times and later sonicated. To this niosomal suspension. Aqueous solution containing 10 mg/ml of drug is added and vortexes. The PH of the sample is then raised to 7.0-7.2 with 1M disodium phosphate. This mixture is later heated at 60°c for 10 minutes to give niosomes.

The Bubble Method (Ijeoma et al., 1998)
The bubbling unit consists of round-bottomed flask with three necks, and this is positioned in a water bath to control the temperature. Water-cooled reflux and thermometer is positioned in the first and second neck and nitrogen supply through the third neck. Cholesterol and surfactant are dispersed together in this buffer (PH 7.4) at 70°C, the dispersion mixed for 15 seconds with high shear homogenizer and immediately afterwards “bubbled” at 70°C using nitrogen gas to yield niosomes. (Breimer et al., 1985)

Nature and type of surfactant (Malhotra et al., 1994)
The mean size of niosomes increases proportionally with increase in the HLB surfactants like Span 85 (HLB 1.8) to Span 20 HLB 8.6) because the surface free energy decreases with an increase in hydrophobicity of surfactant. A surfactant must have a hydrophilic head and hydrophobic tail. The hydrophobic tail may consist of one or two alkyl or perfluoroalkyl groups or in some cases a single steroidal group.

Cholesterol content and charge (Weissman et al., 1975) (Alsarra et al., 2004)
Hydrodynamic diameter and entrapment efficiency of niosomes is increased by cholesterol. It induces membrane stabilizing activity and decreases the leakiness of membrane.  An increase in cholesterol content of the bilayers resulted in a decrease in the release rate of encapsulated material and therefore an increase of the rigidity of the bilayers obtained. Presence of charge tends to increase the interlamellar distance between successive bilayers in multilamellar vesicle structure and leads to greater overall entrapped volume.

Resistance to osmotic stress
The diameter is reduced by addition of hypertonic salt solution to suspension of niosomes.