Klotho : A hope for the acute kidney injury-diabetes comorbidity 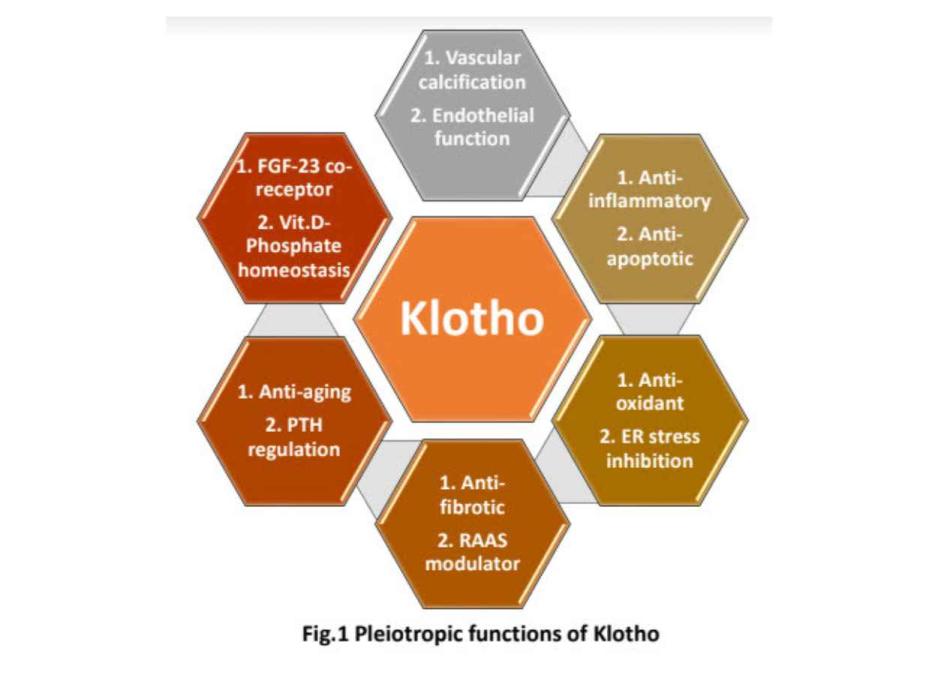 Abstract
Klotho is an antiaging protein that has pleiotropic actions in the body.The transmembraneform of Klotho is cleaved by ADAM 10 and 17 proteases to its soluble forms such as α-Klotho, β-Klotho, and γ-Klotho which havedissimilar expressions and functions in the body. The α-Klotho (further mentioned as 'Klotho') is renoprotective in nature and highly expressed by the epithelial tubular cells of the kidney. Interestingly, Klotho regulation has significant importance in terms of diagnosis and therapeutics in kidney disease research. Evolving research demands Klotho as anupcoming diagnostic and therapeutic target against acute and chronic forms of kidney disease. Acute kidney injury (AKI) is an acute form of kidney disease and has been reported as the state of Klotho deficiency. Under AKI condition diabetes is an independent risk factor that contributes to Klotho downregulation and AKI exacerbation. Fascinatingly, the endogenous restoration of Klotho by means of therapy or its exogenous administration has shown ameliorating effects in AKI. Thus, Klotho may prove an upcoming diagnostic biomarker and therapeutic target for AKI under diabetic or non-diabetic conditions wherein clinical studies are obligatory to be performed.

1. Diabetes
Diabetes mellitus is a metabolic disorder with devastating mortality and morbidity rate across the globe.According to the recent2021 report of the International Diabetes Federation-nearly 537 million adults of the age range 20-79 years are active with diabetes. These numbers are expected to rise to 643 million by 2030 and by 2045 they may reach 783 million. Shockingly, the scenario is further worsened in the case of low- and middle-income countries where 3 in 4 adults are living with diabetes. Disgracefully, 240 million adults who are active with diabetes are undiagnosed. The mortality caused by diabetes alone is around 6.7 million. Economically, diabetes has a high impact on the economy, and out of total health expenditure, 9% of total spending is being spent on diabetic adults.
Diabetes is a chronic metabolic disease wherein either pancreas is unable to produce enough insulin to control the blood glucose (type1 diabetes) or the body does not utilize the insulin produced by the pancreas in the body i.e. insulin resistance or receptor insensitivity (type 2 diabetes). Insulin is a hormone thatis produced by the islets (beta cells) of the pancreas which regulates the blood glucose level and thus energy metabolism in the body. Anabnormality in the functioning or regulation of insulin secretion results in diabetes.The major shortcoming of diabetes is that over time persistent high glucose seriously damages almost every major and vital organ system of the body. It may cause stroke, heart attacks, acute kidney injury (AKI), diabetic nephropathy, neuropathy, retinopathy, kidney failure, impotence, and even serious life-threatening infections.The kidney is a major organ and plays a significant role in insulin synthesis and its regulation. Under diabetic conditions, the functioning of the kidney is hampered (diabetic nephropathy/diabetic kidney disease). Shockingly, AKI-associated deaths are prevalent in diabetic patients.

2. Acute kidney injury
AKI is an abrupt change in kidney functions and/or structure featured by decreased urinary output or oliguria. AKI is commonly observed in hospitalized and comorbid patients with significant morbidity and mortality. Among ICU patients the morbidity rate of AKI is 12-24% wherein more than 20% of patients’ death is reported.The incidences of AKI and associated deaths are highly prevalent in diabetic patients when compared to nondiabetic patients. AKI can be caused by decreased or no blood supply, side effects of drugs, the presence of diseases such as diabetes, CKD, cardiovascular diseases, ischemia/hypoxia reperfusion injury, or sepsis. There is as such no particular treatment and promising diagnostic tool is available to treat and diagnose AKI. Therefore, emerging research is working immensely to find out the potential diagnostic and therapeutic target for AKI under diabetic conditions. The existing treatment options against AKI are symptomatic (e.g. antibiotics, steroids, renin-angiotensin modulators, beta-blockers, etc.) and unable to control the persistently rising morbidity and mortality rates associated with AKI. Growing pieces of evidencepredict that Klotho can be the upcoming potential diagnostic tool and therapeutic target forAKI in diabetic patients.

3. Klotho
Klotho is a transmembrane protein that also exists in circulating/soluble form. Upon cleavage by metalloproteases (ADAM 10 and 17) it is released in the different formsα-Klotho, β-Klotho, and γ-Klotho. These subtypes are differentially expressed in the organs wherein they possess distinct functions. Klotho was known forits anti-aging property, moreover, recent research proved that Klotho (α-Klotho) has diagnostic and therapeutic potential in kidney diseases. Klotho is pleiotropic in nature regulatesvitamin D, phosphate homeostasis, and mineral metabolism, and also possesses anti-inflammatory, antioxidant, anti-apoptotic,and antiaging properties which make itan important target for AKI (Fig. 1).Exploring the diagnostic and therapeutic efficacy of Klotho at the clinical level could provide fundamental knowledge of its regulation and application in AKI in the presence or absence of diabetes.
In the preclinical studies like the ischemic-reperfusion renal injury model of AKI, the plasma and renal Klotho deficit were seen. However, the treatment with Trichostatin-A, a histone deacetylase inhibitor, restored the Klotho level which eventually led to AKI amelioration. This study revealed that Klotho can be regulated by epigenetic mechanisms and its restoration is renoprotective. Similarly, in the unilateral ureteral obstruction (UUO) model of fibrosis, the plasma and renal Klotho deficiency were observed post-UUO surgery. Very interestingly, the exogenous administration of Klotho attenuated the features of fibrosis in the UUO model. Klotho is also known for regulating the renin-angiotensin system and endoplasmic reticulum stress in kidney disease (Fig. 1). Clinically, in the patients with acute and chronic kidney disease, a significant decrease in plasma Klotho was seen wherein the level of plasma Klotho was normal in the patients without kidney disease suggesting the diagnostic potential of Klotho against kidney disease. Apart from these studies, there are numerous preclinical and clinical reports who have proved the diagnostic and therapeutic potential of Klotho.However, the diagnostic tool or examination kit with a clinical reference range has to be developed yet. Additionally, a suitable formulation of Klotho shall be produced for its exogenous administration. To do this large cohort studies shall be conducted on kidney disease patients.

4. Summary and conclusion
AKI is a clinical condition highly prevalent in diabetic patients. The lack of potential diagnostic biomarkers and therapeutic agents persistently upsurges the mortality and morbidity rate in AKI-diabetes comorbidity. Klotho is an emerging renoprotective protein and is in the limelight of kidney research. Preclinical and clinical studies depict Klotho as a novel diagnostic biomarker and therapeutic target for AKI-diabetes comorbidity. However, more clinical studies are required to be conducted on the large population of AKI patients wherein its diagnostic and therapeutic potential can be validated.

Acknowledgments / funding
This work was supported by the Science & Engineering Research Board (SERB), Govt. of India under the Empowerment and Equity Opportunities for Excellence in Science scheme [EEQ/2019/000308].