ABSTRACT
Diabetes Mellitus describes a metabolic disorder which is characterized by chronic hyperglycaemia with disturbances of carbohydrate, fat and protein metabolism resulting from defects in insulin secretion. Various combination therapies are used to treat metabolic syndrome and includes an antidiabetic drug to control the blood glucose levels, anti-hyperlipidemic drug to control cholesterol and lipid levels. In this study interaction between Sitagliptin phosphate, drug from antidiabetic class i.e. dipeptidyl peptidase IV inhibitor and Atorvastatin calcium other from antihyperlipidemic class i.e. HMG-COA reductase inhibitor was evaluated in Streptozotocin and High-fat diet induced type II diabetic rat model. The combination was selected since Sitagliptin phosphate and Atorvastatin Calcium share a common metabolizing enzyme, CYP3A4, there might be chances of interaction taking place due to the co-administration of the same. Bioanalytical method was developed and validated according to ICH guidelines for evaluation of pharmacokinetic parameters. Pharmacodynamic parameters such as Serum glucose, Serum cholesterol, Serum triglyceride levels and other related tests were performed to evaluate interaction at pharmacodynamic level. Results suggest that, at pharmacodynamic and pharmacokinetic level, this combination treatment can have good application in managing blood glucose level and lipid level as well. Being not affected by the CYP450 metabolisms as when correlated with plasma levels at their particular half-life, we suggest that Sitagliptin phosphate and atorvastatin calcium on simultaneous administration will not lead to cause any toxic effect.

INTRODUCTION
Type II Diabetes mellitus is characterised by high blood sugar level due to insulin resistance and/ or relative lack of insulin. In many cases of chronic diabetes along with high blood sugar level, high level of lipids are also observed which leads to dyslipidemic conditions (which includes any abnormal lipid levels) (Srinivasan K et.al., 2005). Various combination therapies are prescribed to treat such coexisting conditions such as Sitagliptin phosphate and Simvastatin calcium; Glimepride, Rosuvastatin and Telmisartan; Metformin, Glimepride, Telmisartan and Atorvastatin; Sitagliptin phosphate and Atorvastatin calcium. Drug interaction refers to the consequences leading due to co-administration of two or more drugs. This action can increase or decrease the drug effect or a new effect can be produced that neither produces on its own. Typically, interactions between drugs can be termed as drug-drug interaction. However, interactions may also exist between drugs and food, drug and medicinal plants or herbs which can be termed as drug-food interaction, drug-herb interaction respectively (Tornio A et.al., 2012).  Drug interactions are basically of two types i.e. pharmacokinetic drug interaction and pharmacodynamic drug interaction. Pharmacokinetic drug interactions occur when one drug affects the absorption, distribution, metabolism, or excretion of another. Pharmacodynamic drug interactions occur when two drugs affects the pharmacological action of each other (Scheen A. 2007) (Takanohashi T. 2010). As Sitagliptin phosphate an antidiabetic drug and Atorvastatin calcium an antihyperlipidemic drug share common metabolizing enzyme CYP3A4, their plasma protein binding being 38% and 96%  respectively, since their site of metabolism and route of excretion are similar, when used in a combination may lead to a  drug interaction (Sankar P et.al., 2012).

Sitagliptin phosphate is an oral antihyperglycemic drug of dipeptidyl peptidase IV inhibitor class. It competitively inhibits the enzyme dipeptidyl peptidase. This enzyme breaks down the incretins GLP-1 and GIP; gastrointestinal hormones released in response to a meal. By preventing GLP-1 and GIP inactivation, they increase the secretion of insulin and suppress the release of glucagon by the alpha cells of the pancreas. This drives blood glucose levels towards normal. As the blood glucose level approaches normal, the amounts of insulin released and glucagon suppressed diminishes (XiangFei J et.al., 2011) (Dubala A et.al., 2012) (Inamdar H and Mhaske A, 2012). Atorvastatin calcium is a member of the drug class known as statins, which are used primarily for lowering blood cholesterol and for prevention of events associated with cardiovascular disease. Like all statins, atorvastatin works by inhibiting HMG-CoA reductase, an enzyme found in liver tissue that plays a key role in production of cholesterol in the body (Kumar P et.al., 2008) (Dongyang L et.al., 2012). A base for pharmacokinetic interaction study, simple, rapid and sensitive bio-analytical method on RP-HPLC was developed; for simultaneous estimation of Sitagliptin phosphate and Atorvastatin calcium from rat plasma.

Animal Procurement
Male Sprague Dawley rats (150 to 200 g) were procured from Animal house of Maharashtra Animal and Fishery Sciences University, Mumbai, India. Rats were acclimatized with 12 hours dark and light cycle, Food (Standardised pellets) and water was given ad libitium and animal house was maintained at average temperature (24.00C± 20C) and 30-70%  relative humidity respectively accordance with the guidelines set by the Committee for Purpose of Control and Supervision on Experiments on Animals (CPCSEA).

Plasma sample preparation
The plasma was collected and stored at −20°C until analysis. For sample preparation the plasma was thawed at room temperature and a volume of 250μl was transferred to a glass tube and spiked with 50μl of standard solutions containing concentrations ranging from 100 – 9500 ng/ml of Sitagliptin phosphate and 10 to 200 ng/ml of Atorvastatin calcium and a constant concentration of Eplerenone hydrochloride 100 ng/ml as IS in each solution. Blank plasma samples were spiked with 50μl of mobile phase.

Protein Precipitation Method
Drugs were extracted from plasma samples using protein precipitation technique. Ammonium acetate buffer (100μl of 100mM) was added to each plasma sample for protein precipitation. The samples were then vortex-mixed for 2min. Further 1ml methanol was added for extraction of Sitagliptin phosphate or Atorvastatin calcium respectively, then vortex-mixed for 2min and centrifuged at 5500 rpm, 5oC for 10 min. The clear supernatant layer was separated in a glass test tube and evaporated to complete dryness under the nitrogen evaporator at 60°C. After drying, the residue was reconstituted in 250μl of mobile phase. Samples were vortex-mixed for 1min then put in insert tubes inside the pre-labelled HPLC vials and 50μl were injected into the RP-HPLC column for analysis.
Calibration curves were constructed for spiked plasma samples containing Sitagliptin phosphate in the range of 100-9400 ng/ml at 100, 1650, 3200, 4750, 6300, 7850 and 9400 ng/ml and a calibration curve for spiked plasma samples containing Atorvastatin calcium in the range of 10-220 ng/ml at 10, 45, 80, 115, 150, 185 and 220 ng/ml for each drug with Eplerenone hydrochloride 1000 ng/ml as IS.

Chromatographic conditions
Thermo Autosampler HPLC System with PDA detector (model number HPLC PU – 2080 PLUS) was used for the separation of the compounds. The separation was being achieved on a HiQsil C18HS (4.6mm×250mm) analytical column. Various mobile phases like Methanol: Water [12] – 60:40, 80:20, 50:50, Acetonitrile : Water – 70:30, 60:35, 85:15, Potassium hydrogen phosphate buffer (10mM, 15mM, 20mM. 25mM and 50 mM) : Acetonitrile 45:55, 75:25, 50:50 etc were tried and optimised. The mobile phase with optimum resolution and sharp peak was selected. The final mobile phase was Acetonitrile: 50mM Potassium hydrogen phosphate buffer (pH- 4.5): Methanol in the ratio of 6:3:1. The flow rate kept was 0.6 ml/min and UV detection was performed at 255 nm. The mobile phase was sonicated on an ultrasonic bath for 30 min. The resulting transparent mobile phase was filtered through a 0.45 μ membrane filter (Millipore, Ireland). A 50 μl sample was injected six times under optimized chromatographic conditions and the data was acquired using Chromquest Software. The mobile phase ratio was optimized in isocratic mode for the analysis of Sitagliptin phosphate and Atorvastatin calcium. Different ratio of methanol : water for Sitagliptin phosphate such as 63:37, 65:35, 68:32 and 70:30 and for Atorvastatin calcium  50:50, 55:45, 60:40 and 68:32 were studied. The mobile phase ratio that resulted in a better resolution and higher recovery of the studied compounds was selected as the best mobile phase ratio for the analysis. The mobile phase flow rate was adjusted in isocratic mode for the analysis of studied compounds after applying various flow rats in the range of 0.5–1.5 ml/min. in order to get better separation. Different compounds including Eplerenone hydrochloride, Metformin hydrochloride, Losartan hydrochloride, Valsartan hydrochloride and Paracetamol were tried to be used as IS. The compound that showed better compatibility, best recovery and shorter analysis time was selected as IS for the suggested method. The sample loop size was evaluated in the range of 50–100 μl to adjust the sample size and minimize the problems like column loading and lack of sensitivity of the mentioned compounds.

In vivo Streptozotocin and High-fat diet induced type II diabetic rat model (Srinivasan K et.al., 2005).
42 Male Sprague Dawley rats (150 to 200 g) were distributed in 5 different groups. In group I and II 6 animals per group were taken while in Group III, IV and V 10 animals per group were taken. Group I serves as vehicle control, thus no diseases was induced to this group. Whereas rats of Group II, III, IV and V were fed with high fat diet for 30 days. On 15th day these rats were challenged by single dose of Streptozotocin i.p. (35 mg/kg). As Group II is Diseases control, no treatment was given to this group. Group III was treated with Sitagliptin phosphate (50 mg/kg). Group IV was treated with Atorvastatin calcium (40 mg/kg) and Group V was treated with both Sitagliptin phosphate (50 mg/kg) and Atorvastatin calcium (40 mg/kg) simultaneously. For pharmacokinetic study rats of Group III, IV, V were further distributed in 5 sub-sets consisting 2 animals each.  Blood samples were withdrawn from retro-orbital plexus for  pharmacodynamic studies at 0, 2, 4, 8, 12, 14 and 24 hours on the 1st day of the treatment and on 1,7, 14 day of the treatment i.e. on Day 0, Day 14, Day 21 and Day 28 of the experimental model for  pharmacodynamic studies. For the pharmacodynamic studies the serum concentration of total triglycerides, total cholesterol and blood glucose level will be measured by standard procedures using auto analyser and for pharmacokinetic studies plasma samples were prepared according to the standards procedures and were used for RP-HPLC analysis. 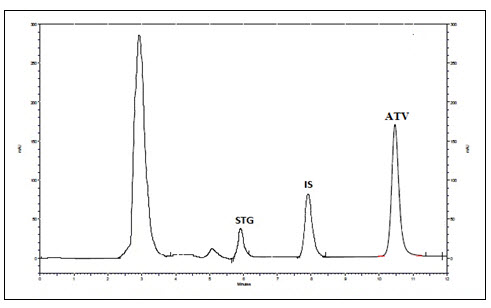 Figure 1 - Chromatogram of recovery of drugs and IS using methanol

Carry-over
Carry over in the blank sample following the high concentration standard should not be greater than 20 % of the LLOQ and 5 % for the IS. The calculated value of drugs and IS were found to be 1.23% of Sitagliptin phosphate, 2.09% of Atorvastatin calcium and 1.04% of IS. Result showed that no carryover was found. So study samples can be randomized.