Environment pollution : Case of China and what India can learn from it

As indicated in figure1 concentration of PM2.5. is severe in India and China which means atmospheric pollution in India and China is extremely severe. Both countries suffer from a large degree of industrial pollution. In case of China 25% of pollution comes from organic solvents as it is a manufacturing hub. Consequently the Chinese government has propagated a series of policies and regulations to suppress the use of organic solvents in order to reduce environmental impact. 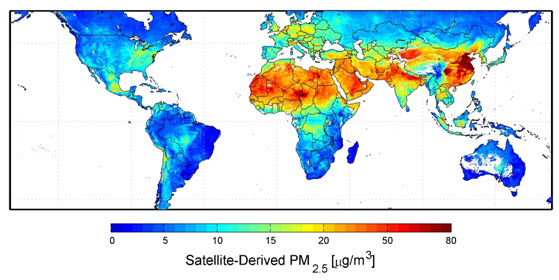 In 2016 China had revised its law on “Prevention of atmospheric pollution”. According to new revised law incentive is given to the parties who are reducing the usage of toxic low-volatility organic solvents. The law also requires zero discharge or reduced VOC emission standard.  The respective provincial/municipal governments also stipulate VOC emission charges based on their unique circumstances. In Shanghai, after January 2017 a tax of RMB 20 is levied on every kg VOC discharged. Thus it is very difficult for industrial enterprises to continue production by using organic solvents in major cities such as Beijing, shanghai, Guangzhou and Shenzhen, Even if factories that use considerable quantity of organic solvents were to be relocated to remote region. There is little guarantee that these factories will not be relocated again or even ordered to stop production within few years. Therefore if organic solvent can be removed from the list of raw materials for producing PTP blister packaging used for Pharma application, the entire industry’s supply would be more stable and significant contribution would also be made to reduce environment pollution.

Role of heat seal coating for PTP and its demand
Survey conducted by Mitsui Chemicals shows that heat seal lacquer used in PTP is mainly adhesive resins like vinyl chloride, vinyl acetate. They are blended with various additives in solutions. When the heat seal lacquer is being applied on Aluminium foil, VOC will be emitted during the drying process. In India most of the factories are not equipped with solvent recycle/incineration facilities to reduce the VOC emission so the VOC is directly going to the environment. In western countries and china solvent recovery system is in place but that is not the ultimate solution. Following diagram shows how the PTP blister foil is made.

Why do we use solvents?
The solvent is just a medium to apply the heat seal material on foil by providing right viscosity and improving flow and leveling.

Estimated consumption of Al foil and HSL for Blister packaging
As estimated by Mitsui Chemicals, In India around 35,000 tons of Aluminium foil is used annually for Blister packaging (PTP) production. About 11,000 tons Solvent type heat seal lacquer (at 25% concentration and 5g/m2coating weight) is used for it which leads to 8,200 MT of VOC emission/yr. VOC emission would be significantly reduced if such heat seal lacquer is replaced with water based heat seal coatings.

Most of the heat seal lacquer currently used for PTP is solvent type, generally containing vinyl chloride- vinyl acetate resin dissolved in organic solvents. Different type of acrylate resins are then added according to the desired heat sealing properties. In contrast, water acts as the solvent for water based heat seal coating. This means that VOC will not be emitted during the drying process. At the same time the working environment is significantly improved, giving additional protection to works health. 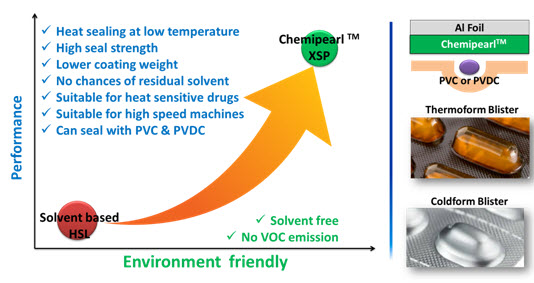 Benefits of Water based heat seal coating
Changing from Solvent based HSL to Water based heat seal coating will bring following benefits -
1.  Functional benefits
• Low temperature sealing
• No solvent retention as it is water based
• Free from Chloro based materials like Vinyl Chloride co- and terpolymers
• Suitable for high output machines
• Compatible to seal with with PVC and PVdC with good seal integrity
• Odorless lidding material
• Environment friendly

2. Cost benefits
• Coating cost per m2 of Al foil do not increase by shifting to the water based coating.
• 3-5 % increment in yield as the coating weight of Chemipearl XSP is 3-5 GSM only.

In addition packaging materials which undergo low temperature heat sealing may not deteriorate as quickly as under high temperature. They are also more esthetically appealing. Lastly with increasing demand for high speed manufacturing there is a need of heat seal coating that can provide good sealing at lower sealing temperature and that allows high speed packaging. As Chemipearl offer a wide sealing window as to temperature and dwell time it gives you more flexibility in production process.

Benefits of low temperature sealing
1. Lower sealing temperatures means lower energy consumption, which is one more step toward a more sustainable, environmentally friendly manufacturing process.
2. Low temperature sealing helps to eliminate fume generation and ink smudging during blister making process.
3. Low temperature sealing is helpful to reduce dwell times. Not only does this promote high line speeds, but it also avoids unnecessary exposure of the drug product to heat. This is especially important when packaging drugs containing large-molecule APIs (e.g., proteins), heat-sensitive excipients, or novel drug delivery systems.
4. Low temperature sealing helps to avoid stress forming in the bottom web. Even though PVC is forgiving when it comes to forming, like all polymers, it has a “memory.” At the forming station some stress is induced in the PVC, the thermoplastic blister material tend to relieve any internal stress when it is reheated during the sealing process. This will cause movement of material, leading to micro channels that might form weeks or even months later, and eventually result in leakers and a compromised shelf life.
5. Less heat in the sealing process might help reduce blister curl, which is usually introduced during the forming process and displayed when the forming material's memory effect is evoked by applying heat a second time.
6. Applying less heat to paper-backed structures also avoids “scorching” of the paper.

Latest market development status
• Water based heat seal coating has been already approved by one of the biggest Pharma Company in India. Many other pharma companies are also under the evaluation process.
• Some of the top convertors of India like Packtime innovations and Bilcare has successfully conducted production feasibility trials.
• Zhongjin matai, largest convertor in China has already started to introduce in Chinese market.
• Taketomo, one of the topmost convertors in Japan has already launched it in Japan. Japanese Pharma companies are welcoming this product because it is environment friendly.

Following graph shows the comparison of HSS of Chemipearl and the HSS of 72 blister samples collected from Indian market. Chemipearl XSP evaluation at Mankind Phamra
Mankind pharma had evaluated Chemipearl XSP529 by producing blisters on ELMAC PACK 500XT machine. Performance of solvent based heat seal lacquer was compared with that of Chemipearl XSP. The blister test was performed with dummy medicines. Following are the parameters used during the testing- 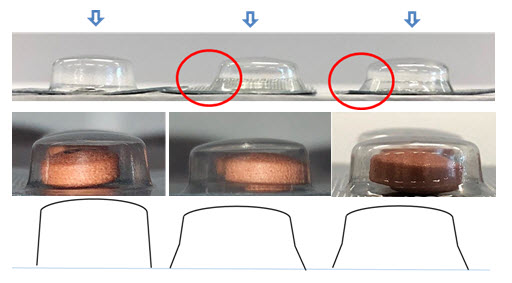 Leak test results comparison
Leak test condition: Pressure was reduced to
450mmHg for 180sec, kept for 15sec, and then released (leak test was conducted only with tablets).