ABSTRACT
It is worldwide accepted that green tea have supernatural property to fight against chronic diseases such as cancer and many more. The presence of polyphenols in green tea is having such property to protect against severe disease and have antioxidant potential. The purpose of this review to explore the beneficial antioxidant potential of green tea with compilation of previously published literature. Green tea is produced from the leaves of the Camellia sinensis plant has provided to be the most popular beverages worldwide. Now people from 160 countries in the world are accustomed to tea drinking although the amount of green tea consumption in worldwide is less than other tea and coffee. Generally, green tea has been found to be superior to black tea in terms of health benefits due to their greater health benefits their demands and popularities are enhanced. The processes used in the manufacture of black tea are known to decrease levels of the monometric catechins to a much greater extent than the less severe conditions applied to other teas. Green tea is accounted for to contain a large number of bioactive fixings which are nearly contributed by polyphenols which assumes a key part of counteractive action and treatment of numerous infections and diseases. The major polyphenols in green tea are catechins, epicatechin (EC), epigallocatechin (EGC), epicatechin gallate (ECG) and epigallocatechin gallate (EGCG). Epigallocatechin gallate is viewed as the most significant active component. This review highlights chapter will highlight the antioxidant activities of green tea that is connected with the high cell reinforcement parts of green tea. This article shows the advantages of green tea for its calming, cancer prevention agent potential and oral human services. Despite the fact that the human clinical information is as yet constrained, this article demonstrates that green tea has its place in both the traditional and elective medicinal groups.

INTRODUCTION [Jigisha et al., 2012; Baptista et al., 1998, Shishikura et al., 2005; Hashimoto et al., 2000]
Green tea was introduced approx.10th century BC. Typically used as a hot or cold beverage. It is an evergreen shrub that can grow up to of heights 30 feet but is usually pruned to 2-5 feet for cultivation. It is obtained from unfermented leaves of Camellia sinensis plants containing complex protein, carbohydrates, lipids, vitamins, flavonoids. Flavonoids are a group of phytochemicals which are responsible for health effects. Flavanoids generally contain higher amounts of disease-fighting antioxidants called polyphenols. Polyphenols additionally show to diminish the thermo-beginning and fortify fat oxidation, boosting the metabolic rate without expanding the heart rate. As compared to other teas, green tea has the highest concentration of polyphenols including (–)-epigallocatechin gallate (EGCG). If the amount of polyphenols is increased it creates more bitter taste. Higher concentration of phenolic compounds in green tea are gallic acid (GA), (–)-gallocatechin (GC), (+)-catechin (C), (–)-epicatechin (EC), (–)-epigallocatechin (EGC), (–)-epicatechin gallate (ECG), (–)-epigallocatechin gallate (EGCG). The active constituent of tea varies with climate, season, variety, horticultural practices and the age of the leaf Green tea leaves are heated soon after harvesting so that enzymatic activity is stopped in order to retain the majority of catechin ﬂavonoids and its green colour.

Processing of Green Tea [Cooper et al., 2011; Lin et al., 2003]
On the basis of the production process, tea may be categorized into 4 types: fermented (black tea), semi-fermented or partly fermented (oolong tea), post-fermented (pu-erh), and non-fermented (white, yellow, and green tea). There are various steps in the production process that determine the type of tea will be obtained after processing. After the plucking, tea leaves undergo withering. Withering is the process which is done to remove moisture and soften the leaves. The production of green tea involves an initial heating process, which kills the enzyme polyphenol oxidase. Polyphenol oxidase is responsible for the black colour of the tea due to the conversion of flavonoids in the leaf into the dark polyphenolic compounds. Duration of withering depends on the type of tea: white tea leaves are withered for 4–5hrs, whereas green, oolong and black tea are withered for at least twice as long. Green tea in north-eastern states of India has a high content of polyphenols which would be responsible for green tea excessively bitter. The other important process is rolling in which the leaves are cut and rolling/twisted. Rolling/twisting of tea leaves is performed by both manually and machines. This process is done to distort tea leaves to release tea oils and to enable the access of enzymes to polyphenols, which is essential for the oxidation process. This involves two major types of processing: orthodox and cut-tear-curl (CTC). Conventional moving alludes to hand preparing or moving with machines that mirror hand rolling. CTC machines empower more fast and broadleaf to twist, delivering littler particles and offers more prominent surface regions for enzymatic oxidation. This method is mainly used for commercial tea in the form of teabags. 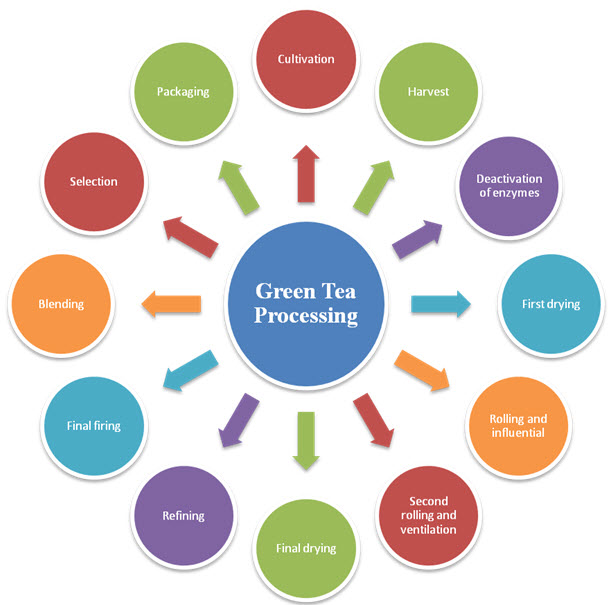 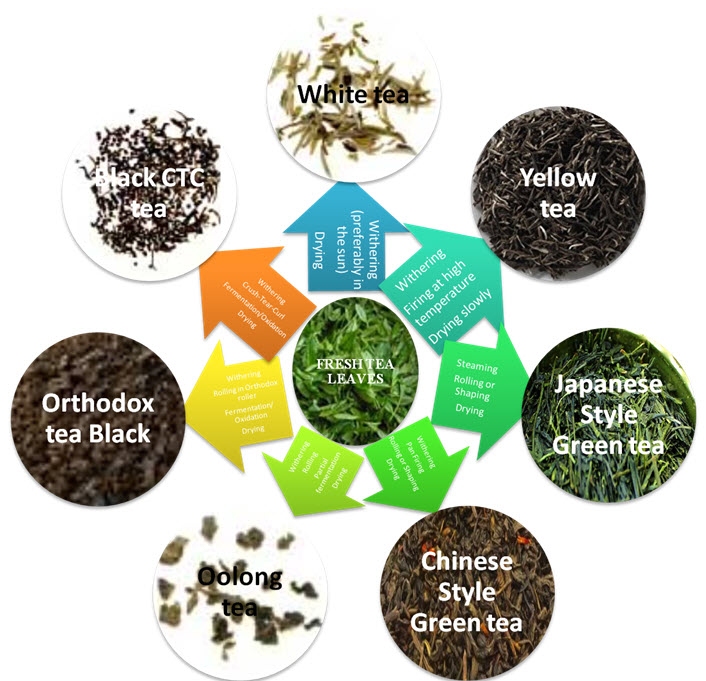 Amongst all types of tea, green tea is the richest in catechins (figure 2). Generally, the phenolic compound composition of green tea resembles that of unprocessed tea leaves. Essentially, flavon-3-ols contribute to the antioxidant capacity of green tea and its sensory properties. The content of individual phenolic compounds in green tea products varies widely.

Antioxidants potential of green tea is the major focusing area of health effects. Polyphenols compose green tea more beneficial in protecting the body from oxidative damage due to free radicals. As compared to other teas, green tea has the highest concentration of polyphenols including EGCG. Higher the content of polyphenols bitter will be the tea. Higher concentration of phenolic compounds in green tea are gallic acid (GA), (–)- gallocatechin (GC), (+)-catechin (C), (–)-epicatechin (EC), (–)-epigallocatechin (EGC), (–)- epicatechin gallate (ECG), (–)-epigallocatechin gallate (EGCG). Other than, it contains carotenoids, tocopherols, ascorbic acid (vitamin C), minerals such as Cr, Mn, Se or Zn, and certain phytochemical compounds Theaflavins in dark tea and catechins in green tea are likewise powerful as cell reinforcement.

The greater part of the catechins has a wide cluster of organic activities relating especially to their compound structure. At present, huge numbers of the catechins' activities have been recognized, however, the systems behind these activities have not been completely illustrated. Their most popular and generally eminent natural activity is their cancer prevention agent and free radical rummaging properties. In any case, it is the developing proof of assorted activities on exchange cell pathways that has pulled in so much consideration as of late. Moreover, the catechins' glucuronide metabolite that structures B-ring O-methylated catechins has little cell reinforcement movement because of its decreased H-giving properties, however, can ensure against cytotoxicity as successfully as its parent compound. 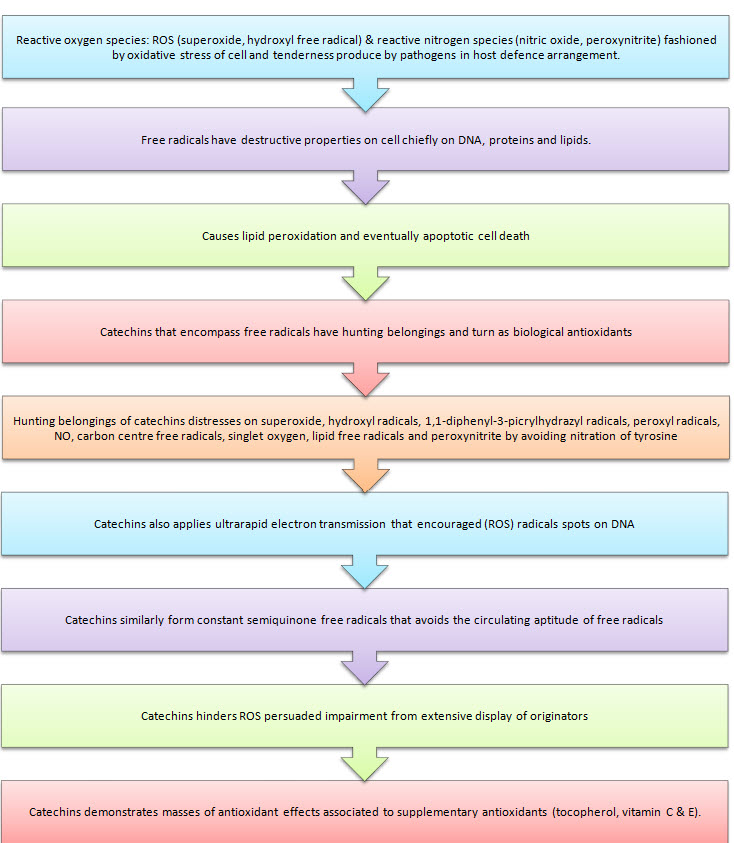 The production of active metabolites by the components of green tea that undergo several metabolic processing like glucuronidation, methylation, and sulfation. Various studies resulted that after consumption of green tea there is a detection of catechins and their metabolites in blood plasma, urine and different tissues of the body. There are various parameters by which the measurement of ingested green tea extract has to be conducted bioavailability of blood plasma is studied after 2 hrs of ingestion and of urine is after 4-6hrs of ingestion. The metabolites like EC and EGC is to be detected in blood plasma and urine. From the last two decades, a number of researchers have been led to determine the health benefits attributed to consumption of green tea and its extracts. These research has shown that green tea has a variety of potential health benefits. These benefits include:

EGCG shown in fig., includes a benzenediol ring (labeled A) joined to a tetrahydropyran moiety (C), a pyrogallol ring (B) and a galloyl group (with the D ring). 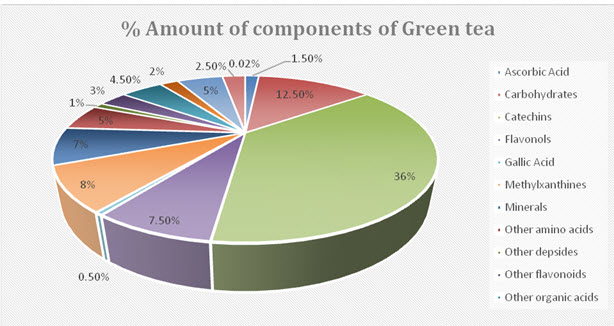 CONCLUSION: Green tea is expended all around the world in different structures. The times of safe utilization of this refreshment, upheld by various investigations demonstrating medical advantages, warrant a general proposal to expend it consistently. At present, there has been an expanded intrigue all-inclusive to distinguish cancer prevention agent possibilities of green tea which is pharmacologically intense and have low or no side effects for use in defensive solution and the sustenance Industry. Expanding information of cell reinforcement phytoconstituents and incorporate them in every day uses and eating regimen can give adequate help to a human body to battle those sicknesses. Green tea is developing as the normal solution for all the wellbeing related issues. With the most recent headway in the advances, different possibilities of green tea have been investigated. This has prevailed with regards to bringing the predictable enthusiasm of individuals toward the medical advantages related to this homegrown endowment of nature to the humanity. It isn't amazing that step by step green tea and its items are catching the worldwide market and its utilization has likewise expanded unbelievably. The credit for this surprising accomplishment is connected with the high cell reinforcement parts of green tea. This article shows the advantages of green tea for its calming, cancer prevention agent potential and oral human services. Despite the fact that the human clinical information is as yet constrained, this article demonstrates that green tea has its place in both the traditional and elective medicinal groups.