ABSTRACT
Glanzmann's Thrombasthenia (GT) is a rare, autosomal recessive bleeding disorder characterized by prolonged bleeding time and impairment in aggregation of platelets and impairment in clot retraction. The physiological defect includes impairment of glycoprotein receptor’s (GPIIb/IIIa complex) present on platelet membrane which mediates platelet aggregation through fibrinogen binding. Purpose of this study is to get  all of us know about this rare condition. A 16-year old female patient presented with repeated episodes of menstrual bleeding since 4years. She was a k/c/o Glanzmann's thrombasthenia. She was treated with antifibrinolytics, IV fluids and then discharged. Early diagnosis and proper supportive care are the measures for prognosis of Glanzmann’s thrombasthenia.

By providing proper supportive care and by platelet transfusions we will manage the symptoms like bleeding and other manifestations, so by this definitely we will observe a very good prognosis (Christopher Sebastiano, 2010).

She was a k/c/o Glanzmann's thrombasthenia. She was given blood transfusion many times in the past. She was born out of a consanguineous marriage. On examination, she had pallor. Vital signs were stable. Cardiovascular and other system examination were unremarkable.

Lab Investigations:  it shows lab values of a patient with compared to Normal value. 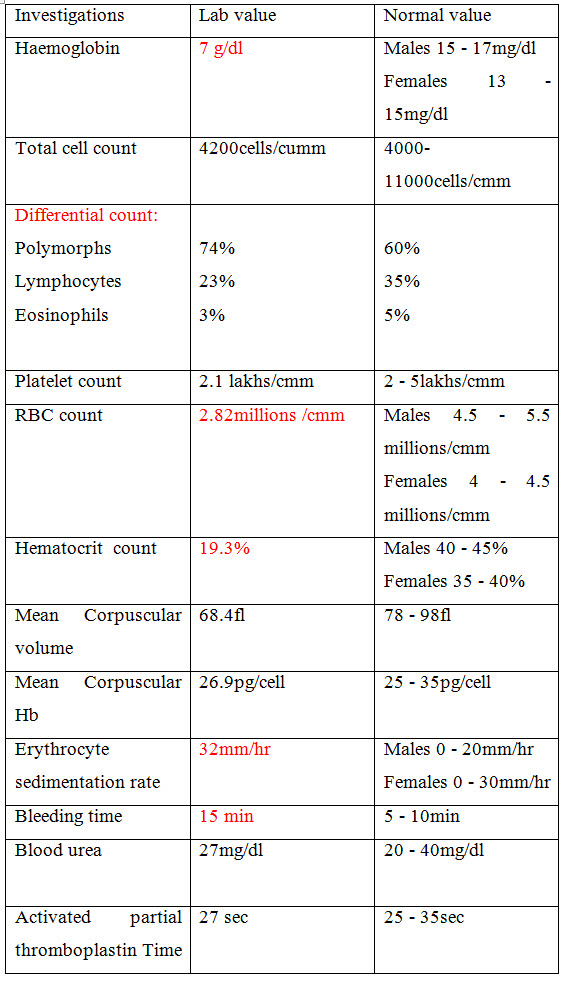 Hence the patient was found to have menstrual bleeding with a normal platelet count. Then patient was treated with following treatment.

DISCUSSION:
GT shares clinical and laboratory findings with other more common acquired bleeding disorders.  GT should be considered as a differential factor in patients with a history of severe bleeding following minor trauma or unprovoked bleeding.  In this case the family history of consanguineous marriage plays a key role in diagnosing GT (Indu Varkey, 2014).

Causes of GT include anaemia, acute lymphocytic leukaemia, HTN, vitamin deficiencies  (Raghavendra H Gobbur, 2014).  In the present case, the patient’s medical history revealed that she was a known case of Glanzmann’s thrombasthenia at 13years of age.
Patients with severe bleeding episodes must continue to receive platelet transfusions for 48 hours after bleeding and until wound healing has occurred in patients undergoing surgery.

CONCLUSION:
A 16 year old female patient was admitted with history of recurrent menstrual blood loss and delayed wound healing and then patient was treated with appropriate treatment. As it was very rare and untreatable condition patient’s must aware of it and take proper precautions to avoid any trauma or accidents and follow physician’s advice regurarly and monitor platelets levels frequently, so by this we can control episodes of bleeding. Hope in future advancements in genetical engineering may provide cure for this condition.