INTRODUCTION:
Glimepiride (Sahoo 2005)  is the only third generation sulphonyl urea, which lowers the blood glucose level in the healthy subjects as well as in patients with type II diabetes. After oral administration, Glimepiride is completely (100%) absorbed from the GI tract. Studies with single oral doses in normal subjects and with multiple oral doses in patients with type II diabetes have shown significant absorption of Glimepiride within 1 hour after administration and peak drug levels (Cmax) at 2 to 3 hours. Due to its low biological half-life, it requires frequent administration to maintain plasma concentration. This leads fluctuations in plasma concentration and also causes inconvenience to the patient. Therefore, development of controlled release dosage forms would clearly be beneficial in terms of decreased dosage requirements, thus increase patient compliance. Microencapsulation is a well-known method for the preparation of microparticles for controlled release. Among the various methods developed for formulation of microparticles, solvent evaporation method is one of the mostly widely used one to formulate Microparticles because of its ease of fabrication without compromising the activity of drug. In the present investigation Eudragit RLPO is used as a rate retardant polymer. Eudragit RLPO is water  insoluble polymer which is widely used as a wall material for controlled release microparticles. This is due to its biocompatibility, good stability, easy fabrication and low cost. In the present  Investigation solvent evaporation method was employed with an objective of developing  microparticles for oral controlled release and subjected for evaluation in terms of drug content, encapsulation efficiency, size analysis, compatibility studies and Invitro release studies (Behera,2008)
1) To prepare Glimepride loaded Eudragit RLPO microparticles by varying proportions of Polymer and surfactants.
2) To evaluate Glimepride loaded Eudragit RLPO microparticles (Sahoo 2005)

MATERIALS & METHODS:
1. The microparticles were prepared by emulsion solvent evaporation technique.
2. Glimepiride microparticleswere formulated by varying the drug and polymerratios and by varying the surfactants.
3. Weighed amount of drug and polymer were dissolved in 10ml of acetone.
4. The organic solution was then slowly added to 100ml of liquid paraffin containing 1% surfactant with constant stirring for 1hr.
5. The resulting microparticles were separated by filtration and washed with petroleum
ether.
6. The microparticles finally air dried over a period of 12 hrs and stored in a dessicator. (Davis 2004)

Estimation of drug content:( Hamaguchi 2004)
An accurately weighed portion of microparticles equivalent to 5 mg of Glimepiride were weighed and transferred in to a mortar. Powdered and dissolved in 100 ml of pH 7.4 phosphate buffer, suitably diluted the absorbance of the resulting solution was measured at 236 nm.

Morphological Characterization by SEM:
Morphology and surface characteristics were studied by Scanning Electron Microscopy. The samples for the SEM analysis were prepared by sprinkling the microparticles on one side of the double adhesive stub. The stub was then coated with fine gold dust. The microparticles were then observed with the scanning electron microscope (Leica Electron Optics, Cambridge, USA) at 10 kv). (Khan 2004)

Drug Release Studies:
Release of Glimepiride from the microparticles, was studied in phosphate buffer of pH 7.4 (900 ml) using Eight Station Dissolution Rate Test Apparatus (M/s. Electrolab) with a paddle stirrer at 100 rpm and at 37 OC ± 0.5 OC. A sample of microparticles equivalent to 5 mg of Glimepiride was used in each test. Samples were withdrawn through a filter (0.45) at different time intervals and were assayed at 228 nm for Glimepiride using Shimadzu double beam UV spectrophotometer. The drug release experiments were conducted in triplicate (Bravo2002). 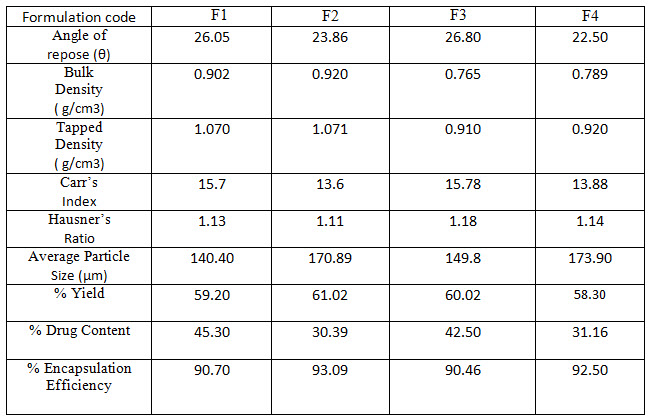 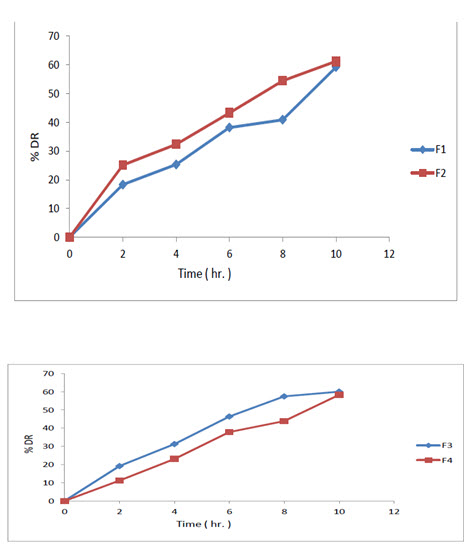 CONCLUSION
Glimepiride loaded Eudragit RLPO microparticles were successfully formulated by emulsion solvent evaporation method. In these formulations, span 80 and tween 80 are used as surfactants and the optimum concentration of each is 1% w/v. A total number of four batches were formulated by varying the process variables like change in polymer concentration and type of surfactant. The detailed composition of microparticles was shown in Table 1. These microparticles were evaluated for their percentage yield, flow properties, size analysis, percent  drug content, percent encapsulation efficiency and morphological characterization, The angle of repose values of all the formulations were found to be in the range of 22.50 – 26,80, i.e. less than 30, which shows their free flowing nature of the prepared microparticles. Bulk density and tapped density showed good packability of the microparticles.