ABSTRACT
The main objective of this study was to formulate an Ibuprofen loaded emulsion from the eutectic mixture and Eudragit RL 100. The eutectic mixture was formed with camphor and menthol which was approved by the FDA. A eutectic mixture is defined as a combination of two or more components at a certain ratio intermingle to form a new chemical compound resulting in a system having a lower melting point than either of the components. The formulated emulsion from the eutectic mixture was evaluated for various studies like pH checking, stability checking by centrifugation, viscosity, particle size analysis, quantitative drug analysis, thermodegradation and in-vitro drug release studies. Neutral pH values resulted in the formulations. The formulation was stable even after it was centrifuged for 5000 rpm for 30 min. Viscosity results showed the formulation was less viscous results in good spreadability. Particle size was determined with particle size analyzer. Drug analysis results revealed about 96 % of drugs are incorporated into the formulation. Thermodegradation results proved that there was no spillage of drugs from the formulations even when the drug was stored at different temperatures. In-vitro drug release study was performed by varying drug concentrations. The results showed there was no change in the drug release even after varying the drug concentration. From the results it was concluded that Ibuprofen was successfully formulated as an emulsion with the help of eutectic mixture a Eudragit RL 100.

INTRODUCTION
Although oral agents are the basis of treatment for patients with chronic pain, their use could also be restricted in some patients. Numerous patients are unable to tolerate oral pain medicine because of advanced age, medical comorbidities, organ injury, adverse effects, or drug interactions. Topical therapies have variety of benefits compared with systemically administer medications. Topical medications make use of their pharmacological effects locally. For patients with localized pain, topical medications could also be notably appropriate (Stanos and Galluzzi, 2013). Ibuprofen is (RS)-2-(4-isobutylphenyl) propionic acid. It is a white or almost white, crystalline powder or colourless crystals (IP, 2010; BP, 2003) which is practically insoluble in water (BP, 2003). Ibuprofen, is a non-steroidal anti-inflammatory drugs (Marchlewicz et al., 2017), was first approved in 1968 in UK (Weiser et al., 2018) it is the third most highly consumed pharmaceutical in the world (Marchlewicz et al., 2017). Ibuprofen is widely used for its analgesic, anti-inflammatory, and antipyretic properties. At low over-the-counter doses (800–1200 mg/day), Ibuprofen is indicated to relieve minor pain and inflammation, including headache, muscular aches, toothache, fever, backache, and dysmenorrhea. At prescription doses (1800–2400 mg/day), it is used for the long-term treatment of rheumatoid arthritis, osteoarthritis, ankylosing spondylitis, and other chronic conditions (Mazaleuskaya et al., 2015). A eutectic mixture is defined as a combination of two or more components which generally do not intermingle to form a new chemical compound but, which at certain ratios, inhibit the crystallization process of one another resulting in a system having a lower melting point than either of the components. It is assumed that eutectic mixture show a low volatility, have a broad liquid range, and are water compatible, non-flammable, non-toxic, biocompatible and eco-friendly (Dannie et al., 2015). Eutectic systems have been useful in several areas in the pharmaceutical field such as the increase of drug solubility, permeation, and absorption. A eutectic mixture can be used as the oil phase in emulsions and as a deep eutectic solvent (Phaechamud and Tuntarawongsa, 2016). Because of its extremely little solubility in water (0.46 mg/mL at 25°C5), menthol is a good candidate to prepare sustainable, low-priced and hydrophobic solvents using the formation of eutectic mixtures approach. Eutectic mixture containing menthol along camphor, borneol and N-ethyl-5-methyl-2-(1-methylethyl)cyclohexane carboxamide has been previously used as a vehicle for numerous formulations for numerous uses (Ribeiro et al., 2015). Menthol has normally been used as a eutectic component, with a permeation enhancer property (Phaechamud and Tuntarawongsa, 2016). Camphor is a waxy, white crystalline solid material, obtained from the tree Cinnamomum camphora with a powerful scent. Its terpenoid is originally obtained by distillation of bark from camphor tree (Suresh C. Sikka and Alma R. Bartolome, 2018). It has been found that a eutectic mixture of camphor, menthol, thymol and similar compounds is a strong solvent for non-steroidal anti-inflammatory drugs and other substances. As a particular advantage, the eutectic mixture was found to be safe, non-hazardous and present synergistic behavior in the anti-inflammatory action of NSAIDs, thanks to the anti-inflammatory properties of camphor and skin penetration enhancing properties of menthol. The compositions were found to permit a large amount of drug loading than existing ointment bases and creams, showed no skin irritation and provided improved delivery properties for incorporated drugs (Joseph Schwarz and Michael Weisspapir, 2005). Eudragit  RL100  is  a  solid  substance  available  in  the  form  of  colourless,  clear  to cloudy granules with a faint amine like odour. A widespread literature review on Eudragit RL 100 revealed that it is used for controlled release   and   bioavailability   improvement   approaches in   various   dosage   forms (Patra et al., 2017). Pharmacokinetic information recommend that topically applied NSAIDs may result in increased local concentrations without vital harmful systemic levels (Stanos, 2007). The aim of the present work was to formulate and evaluate Ibuprofen loaded emulsion with the help of eutectic mixture and eudragit RL 100.

PREPARATION OF O/W TYPE EMULSION
Emulsion of Ibuprofen was prepared by using eutectic mixture (menthol and camphor) and poloxamer in water. The procedures for the formulations are given as follows.

FORMULATION
Preparation of oil phase from eutectic mixture
Menthol was weighed with the help of digital balance (Shimadzu Corporation, Japan) and taken in a mortar and its size was reduced with the help of pestle. Then needed amount of camphor was weighed, added to menthol and triturate well with pestle. While triturating the solid form was converted into liquid form. It is said to be eutectic mixture. 400 mg of Ibuprofen was dissolved in 6 ml of eutectic mixture. In another test tube, 1000 mg of eudragit RL-100 was dissolved in 6 ml acetone. Eutectic mixture containing drug and acetone containing eudragit RL-100 was mixed together to form a homogeneous solution. It acts as an oil phase.

Preparation of aqueous phase
100 mg of poloxamer 407 was dissolved in 100 ml of water with the help of magnetic stirrer (Remi equipments Ltd, Mumbai). It acts as an aqueous phase.

Preparation of emulsion
Oil phase was added to the aqueous phase in a mechanical stirrer (Remi equipments ltd, Mumbai) at 500 rpm and stirring was nonstop for 2 hrs. 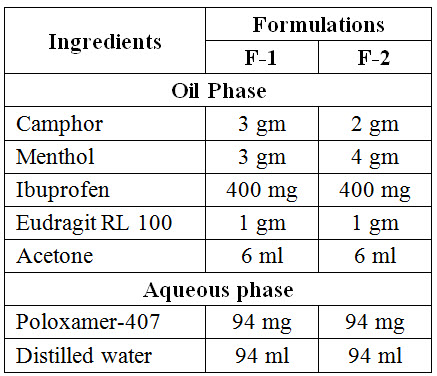 Methodology
Determination of pH
The pH for the formulated emulsion formulation was evaluated with the help of digital pH meter (Labline Stock Centre, Mumbai). The pH apparatus was washed thoroughly with water. The apparatus was calibrated with standard buffer solutions to read the pH correctly. Dip the electrode into the formulations (the electrode immersion depth approximately 4 cm) and wait until the value on the display stabilizes. The pH value was measured on the display (JP, 2001; IP, 2007).

Evaluation of the emulsion stability by centrifugation
The stability of emulsions can be characterized with the help of centrifugation techniques. The formulated emulsion was centrifuged in a centrifuger (Remi elektrotechnik limited, Vasai) at 5000 rpm for 30 min (Tcholakova et al., 2004).

Determination of viscosity
Viscosity is a principal parameter when any flow measurements of fluids, mainly for liquids and semi-solids formulation. Viscosity of the formulations was determined with the help of U-tube viscometer. The viscosity was measured in centipoises (cp) (BP, 2004; Ankur Choudhary, 2011).

Determination of particle size
Particle size analysis, determines the size range, and/or the average, or mean size of the particles in a liquid sample. Particle size analysis is part of particle science, and its determination is carried out generally in particle technology laboratories. The particle size measurement is typically achieved by means of devices called Particle Size Analyzers [Shimadzu SALD-2300 (Wing SALD II: Version 3.1.1)] (Cózar-Bernal et al., 2011).
Quantitative drug analysis
The quantitative drug analysis was done to determine the amount of Ibuprofen present in the emulsion formulation.
Standard preparation:
Accurately weighed 50 mg of Ibuprofen was dissolved in 100 ml of methanol (500 µg/ml). Then 2 ml of this solution was diluted to 50 ml with pH 7.2 to get 20 µg/ml concentrations.

The amount of Ibuprofen present on the formulated emulsion was calculated by using following formula.

Thermodegradation
Accurately measured 1 ml of formulation 1 and 2 (equivalent to 1mg/ml of Ibuprofen) were taken in a standard measuring flask separately. The volume was make up to 50 ml with pH 7.2 phosphate buffer. In another standard measuring flask, 1ml of Ibuprofen solution in pH 7.2 phosphate buffer was taken and diluted with 50 ml buffer. These three measuring flasks were kept in (1) an autoclave at 121 C and 15 lb/in pressure for 15 min, (2) hot air oven at 70 C for 30 min. and (3) a room temperature at 25 C for 30 min. The drug leakage from both formulations and solution at these three different storage conditions were calculated according to the following formula (Tamilvanan S and Varinder K, 2016).

In vitro drug release studies
The in vitro release studies were performed with a slight modification from Tamilvanan Shunmugaperumal and Varinder Kaur 2016. In this study about 10, 5 and 2.5 ml of emulsion (containing 40, 20 and 10 mg of drug) were withdrawn from the formulations 1 and 2 and it’s kept in 3 х 50 ml vials. The vials were placed in a water bath maintained at 37°C using. Periodically, 0.4 ml of sample was withdrawn at a time interval of 1, 5, 10, 15, 20, 25 and 30 min with replenishment using 0.4 ml fresh pH 7.2 (Tamilvanan S and Varinder K, 2016). The withdrawn samples were analyzed using UV double beam Spectrophotometer (SHIMADZU- 1800, Japan) method at 259 nm to calculate the amount of Ibuprofen released from emulsion on these three different dilution ratios. The actual amount of Ibuprofen drug released at different time intervals was calculated.

RESULTS AND DISCUSSION
Emulsion
An emulsion is a colloid of two or more immiscible liquids (generally oil and water) where one liquid contains a dispersion of the other liquids. In other words, an emulsion is a special type of mixture made by combining two liquids that normally don't mix.

Eutectic mixture
Eutectic mixture is when two or more solid components are mixed together they convert into liquid. A eutectic system is a mixture of two or more compounds that reduce the melting point of each compound because the total entropy of the system increases. Eutectic systems have been applied in many areas in the pharmaceutical field such as to increase the drug solubility, permeation, and absorption.
A eutectic mixture can be used as alternative to oil phase in emulsions. Menthol has generally been used as a eutectic component, with a permeation enhancer property. Menthol forms a liquid eutectic mixture at room temperature with many sublimate compounds such as camphor, borneol, thymol, and cineole
Initially the solubility of Ibuprofen was determined by dissolving Ibuprofen in the eutectic mixture (camphor:menthol). The prepared formulations were evaluated for various studies

Evaluation of the emulsion stability by centrifugation
The stability of emulsions can be characterized with the help of centrifugation techniques. In emulsion there is a chance of separation of two layers (oil and water). It the layers are separated the formulation is not a stable one. So the formulated emulsion was centrifuged in a centrifuger (Remi elektrotechnik limited, Vasai) at 5000 rpm for 30 min. The results shown that there was no separation of layers even after centrifugation. The reports are shown in table 2.

Determination of viscosity
Brookefield viscometer was used to determine the viscosity of the emulsion formulations. The viscosity was found to be 1.38 for F1 formulation and 1.42 for F2 formulation. The results shown that the formulation may be easily spreadable in the applied area. The readings were shown in the table 2.

Quantitative Drug Analysis
It was used to determine the amount of Ibuprofen present in the emulsion formulation. The values are shown in the table 2.