CURRENT AND FUTURE TREND IN NANOTECHNOLOGY: A REVIEW

ABSTRACT
In field of nanotechnology nonmaterial are at the leading edge. Nanotechnology has received a lot of attention with enthusiasm because of its future potential. Their unique size-dependent properties make these materials greater and indispensable in many areas of human activity. Particulate systems like nanoparticles have been used as a physical approach to alter and improve the pharmacokinetic and pharmacodynamic properties of various types of drug molecules. Polymeric nanoparticles have been extensively studied as particulate carriers in the pharmaceutical and medical fields, because they show promise as drug delivery systems as a result of their controlled and sustained release properties, subcellular size, biocompatibility with tissue and cells. This technology offers the advantage of protecting drugs from degradation; reduce the number of doses required. This brief review tries to summarise the most recent developments in the field of applied nanomaterials, nanoparticles, solid lipid nanoparticles, nanocrystals, nanosuspensions, nanoemulsions, in particular their application in biology and medicine, and discusses their commercialisation prospect.

INTRODUCTION
Nanotechnology is science of matter and material that deal with the particle size in nanometers. The word’ nano’ is derived from latin word, which means dwarf (1nm=10-9m). Nanomedicine deals with comprehensive monitoring, control, construction, repair, defense and improve human biological system at molecular level using engineered nanostructures and nanodevices.1 where the drug is dissolved, entrapped, encapsulated or attached to a nanoparticle matrix. Depending upon the method of preparation nanoparticles, nanospheres or nanocapsules can be obtained. Pharmaceutical nanotechnology has provided more fine tuned diagnosis and focused treatment of disease at a molecular level.2 NPs are promising vehicles for drug delivery by easy manipulation to prepare carriers with the objective of delivering the drugs to specific target, such an advantage improves the drug safety. Polymer-based nanoparticles effectively carry drugs, proteins, and DNA to target cells and organs. Their nanometer-size promotes effective permeation through cell membranes and stability in the blood stream. Polymers are very convenient materials for the manufacture of countless and varied molecular designs that can be integrated into unique nanoparticle constructs with many potential medical applications.3 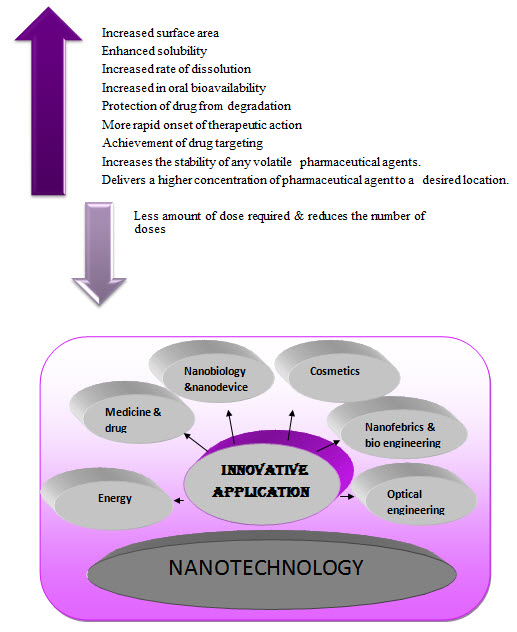 Polymers used in preparation of nanoparticles
The polymers should be compatible with the body in the terms of adaptability (non-toxicity) and (non-antigenicity) and should be biodegradable and biocompatible.

1. Solvent evaporation
Solvent evaporation was the first method developed to prepare NPs. In this method, polymer solutions are prepared in volatile solvents and emulsions are formulated. The emulsion is converted into a nanoparticle suspension on evaporation of the solvent for the polymer, which is allowed to diffuse through the continuous phase of the emulsion. In the conventional methods, two main strategies are being used for the formation of emulsions, the preparation of single-emulsions, e.g., oil-in-water (o/w) or double-emulsions, e.g., (water-in-oil)-in-water, (w/o)/w. These methods utilize high-speed homogenization or ultrasonication, followed by evaporation of the solvent, either by continuous magnetic stirring at room temperature or under reduced pressure. Afterwards, the solidified nanoparticles can be collected by ultracentrifugation and washed with distilled water to remove additives such as surfactants. Finally, the product is lyophilized11,12. Song et al.13 prepared nanoparticles of PLGA with a typical particle size of 60–200nm by employing dichloromethane and acetone (8:2, v/v) as the solvent system and PVA as the stabilizing agent. Particle size was found to be influenced by the type and concentrations of stabilizer, homogenizer speed and polymer concentration.

2. Nanoprecipitation
Nanoprecipitation is also called solvent displacement method. It involves the precipitation of a preformed polymer from an organic solution and the diffusion of the organic solvent in the aqueous medium in the presence or absence of a surfactant14-18. The polymer generally PLA, is dissolved in a water-miscible solvent of intermediate polarity, leading to the precipitation of nanospheres. This phase is injected into a stirred aqueous solution containing a stabilizer as a surfactant. Polymer deposition on the interface between the water and the organic solvent, caused by fast diffusion of the solvent, leads to the instantaneous formation of a colloidal suspension19. To facilitate the formation of colloidal polymer particles during the first step of the procedure, phase separation is performed with a totally miscible solvent that is also a non solvent of the polymer20. The solvent displacement technique allows the preparation of nanocapsules when a small volume of nontoxic oil is incorporated in the organic phase. Considering the oil-based central cavities of the nanocapsules, high loading efficiencies are generally reported for lipophilic drugs when nanocapsules are prepared. The usefulness of this simple technique is limited to water-miscible solvents, in which the diffusion rate is enough to produce spontaneous emulsification. Then, even though some water-miscible solvents produce certain instability when mixed in water, spontaneous emulsification is not observed if the coalescence rate of the formed droplets is sufficiently high21. Although, acetone/dichloromethane (ICH, class 2) are used to dissolve and increase the entrapment of drugs, the dichloromethane increases the mean particle size22 and is considered toxic. This method is basically applicable to lipophilic drugs because of the miscibility of the solvent with the aqueous phase, and it is not an efficient means to encapsulate water-soluble drugs. This method has been applied to various polymeric materials such as PLGA, PLA, PCL,23,24 and poly (methyl vinyl ether-comaleic anhydride) (PVM/MA)25,26. This technique was well adapted for the incorporation of cyclosporin A, because entrapment efficiencies as high as 98% were obtained27. Highly loaded nanoparticulate systems based on amphiphilic h-cyclodextrins to facilitate the parenteral administration of the poorly soluble antifungal drugs Bifonazole and Clotrimazole were prepared according to the solvent displacement method 28

3. Emulsification/solvent diffusion (ESD)
This is a modified version of solvent evaporation method29. The encapsulating polymer is dissolved in a partially water soluble solvent such as propylene carbonate and saturated with water to ensure the initial thermodynamic equilibrium of both liquids. In fact, to produce the precipitation of the polymer and the consequent formation of nanoparticles, it is necessary to promote the diffusion of the solvent of the dispersed phase by dilution with an excess of water when the organic solvent is partly miscible with water or with another organic solvent in the opposite case. Subsequently, the polymer-water saturated solvent phase is emulsified in an aqueous solution containing stabilizer, leading to solvent diffusion to the external phase and the formation of nanospheres or nanocapsules, according to the oil-to-polymer ratio. Finally, the solvent is eliminated by evaporation or filtration, according to its boiling point. This technique presents several advantages, such as high encapsulation efficiencies (generally >70%), no need for homogenization, high batch-to-batch reproducibility, ease of scale-up, simplicity, and narrow size distribution. Disadvantages are the high volumes of water to be eliminated from the suspension and the leakage of water-soluble drug into the saturated-aqueous external phase during emulsification, reducing encapsulation efficiency. As with some of the other techniques, this one is efficient in encapsulating lipophilic drugs. Several drug-loaded nanoparticles were produced by the ESD technique, including mesotetra(hydroxyphenyl)porphyrin-loaded PLGA (p-THPP) nanoparticles30,31, doxorubicin-loaded PLGA nanoparticles32, plasmid DNA-loaded PLA nanoparticles33, coumarin-loaded PLA nanoparticles 34, indocyanine 35, cyclosporine (Cy-A)-loaded gelatin and cyclosporin (Cy-A)-loaded sodium glycolate nanoparticles 36.

4. Salting-out procedure
In this method the use of potentially toxic solvents is avoided. Here only acetone is used and it can be easily removed in the final step by cross-flow filtration. The preparation method consists of adding, under mechanical stirring, an electrolyte saturated solution containing a hydrocolloid, generally poly (vinyl alcohol) as a stabilizing and viscosity increasing agent to an acetone solution of polymer. After the preparation of an oil-in-water emulsion, sufficient water or an aqueous solution of PEG is added to allow complete diffusion of acetone into the aqueous phase, thus inducing the formation of nanospheres.37

5. Dialysis
Dialysis offers a simple and effective method for the preparation of small, narrow-distributed PN38,39. Polymer is dissolved in an organic solvent and placed inside a dialysis tube with proper molecular weight cut off. Dialysis is performed against a non-solvent miscible with the former miscible. The displacement of the solvent inside the membrane is followed by the progressive aggregation of polymer due to a loss of solubility and the formation of homogeneous suspensions of nanoparticles. The mechanism of NP formation by dialysis method is not fully understood at present. A number of polymer and copolymer nanoparticles 40,49 were obtained by this technique. Poly(benzyl-l-glutamate)-b-poly(ethylene oxide), Poly(lactide)-b-poly(ethylene oxide) nanoparticles were prepared using DMF as the solvent. The solvent used in the preparation of the polymer solution affects the morphology and particle size distribution of the nanoparticles. Chronopoulou et al.50 reported a novel osmosis based method for the preparation of various natural and synthetic NP.

Rapid expansion of supercritical solution
In traditional RESS, the solute is dissolved in a supercritical fluid to form a solution, followed by the rapid expansion of the solution across an orifice or a capillary nozzle into ambient air. The high degree of super saturation, accompanied by the rapid pressure reduction in the expansion, results in homogenous nucleation and thereby, the formation of well-dispersed particles. Results from mechanistic studies of different model solutes for the RESS process indicate that both nanometer and micrometer-sized particles are present in the expansion jet 52. A few studies were carried out on the production of NPs using RESS. Poly (perfluoropolyetherdiamide) droplets produced from the rapid expansion of CO2 solutions. The RESS experimental apparatus consists of three major units: a high-pressure stainless steel mixing cell, a syringe pump, and a pre-expansion unit. A solution of polymer in CO2 is prepared at ambient temperature. The supercritical solution is now allowed to expand through the nozzle, at ambient pressure. The concentration and degree of saturation of the polymer have a considerable effect on the particle size and morphology of the particles for RESS 53-54.

Rapid expansion of supercritical solution into liquid solvent
A simple, but significant modification to RESS involves expansion of the supercritical solution into a liquid solvent instead of ambient air, termed as RESOL. Meziani et al 55 reported the preparation of Poly (heptadecafluorodecyl acrylate) nanoparticles having an average size of less than 50 nm. Even though in RESS technique no organic solvents used for the formation of NPs, the prime products obtained using this technique are microscaled rather than nanoscaled, which is the main drawback of RESS. In order to overcome this drawback a new supercritical fluid technology known as RESOLV has been developed. In RESOLV the liquid solvent apparently suppresses the particle growth in the expansion jet, thus making it possible to obtain primarily nanosized particles 56. 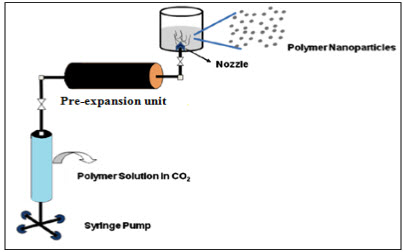