3. Macro reticular resin bead:
A reticular network of the resin is seen superficially on the resin beads. They are not highly efficient and have very low ion exchange capacities [15].

4.  Surface sulfonated and thermostatically bonded with anion:
It is less efficient and also has less exchangeable capacity [15].

GELS: Ion exchange gels are used for the separation of large molecules like proteins, nucleic acids. Cellouse and dextran ion exchangers which are polymers of sugar glucose possess large pore sizes and lower charge densities. Because they are much softer than polystyrene resins, dextron and its relatives are called as gels.

INORGANIC EXCHANGERS: The combinations of hydrous oxides of highly charged ions, with one oxide more acidic than the other have been found to have ion exchanging properties.  The amorphous precipitates have higher exchange capacities than the crystalline compounds because of the greater surface area of the former type of compounds. Inorganic exchangers are employed when Separations involving harsh chemical conditions such as high temperature, high radiation level, strong basic solution or powerful oxidizing agent. E.g.: Titanium Arsenite has been used to absorb alkaloids. Hydrous antimony peroxide has been used to study exchange equilibrium of Ka and Rb ions with hydrogen and other ions [12].

INSTRUMENTATION:
- General components of an ion-exchange chromatography are presented as below (Figure - 4) [12].
- A high pressure pump with pressure and flow indicator, to deliver the eluent.
- An injector for introducing the sample into the eluent stream and onto the column
- A column, to separate the sample mixture into the individual components
- An oven, optional
-A detector, to measure the analyte peaks as eluent from the column
- A data system for collecting and organizing the chromatograms and data [12]. 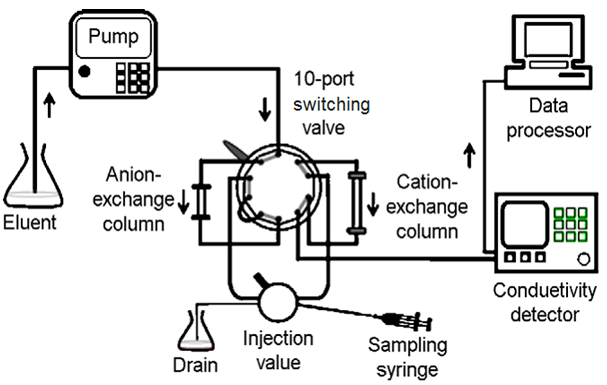 Column:
Column used in the laboratories are made up of glass but those used in industries are made up of either high quality stainless steel or polymer, which are resistant to strong acids and alkalis [5]. The geometry of column depends completely on the separation factor. The separation is improved by increasing the length of the column but the length cannot be increased beyond a critical length. Uneven flow of liquid is possible in case of column too wide or too narrow in size [16]. A Dimension of column is 20:1 to 100:1 for the higher efficiency can be used [15].

Application of the sample:
After packing the column, the solution to be analyzed is added to the top of the column and allowed to pass through the bed of ion exchanger. For this purpose the syringe or pipette is utilized [17].

Developments of the chromatogram and elution:
After introduction of the sample, development of the chromatogram is done by using different mobile phases. The aqueous salt solution is adjusted to a constant ionic strength.  The choice of the mobile phase depends on the selectivity of the resin for the solute ions. Two types of elution techniques are used:
a.    Isocratic elution
b.    Gradient elution
In Isocratic elution technique, the same solvent composition is used i.e., same strength of acids or alkalis or buffers are used.
In gradients elution techniques, initially less acidic or basic mobile phase is used. Then, acidity or basicity is increased at regular intervals. The different fraction of the elution is collected volume wise or time wise and analyzed [15].

Analysis of the elute or Detection:
Different fractions are collected with respect to the volume or time is analyzed for their contents. Several methods of analysis can be used which depends upon the nature and quantity of the ionic species are:
* Conductometric method
* Ampherometric methods
* Flame photometric method
* Polarography
* UV. Spectroscopy
* Radiochemical methods using Geiger Muller counter, ionization chamber method [16-18].
Conductivity detector is the most common and useful detector in ion exchange chromatography. Conductivity detection gives excellent sensitivity when the conductance of the eluted solute ion is measured in an eluent of low background conductance. Therefore when conductivity detection is used dilute eluents should be preferred and in order for such eluents, to act as effective competing ions, the ion exchange capacity of the column should be low [1]. The results obtained are stored in computer.

2.    Column method:
Ion exchange chromatography is technique in which separation of the components of a mixture is based upon the different selective coefficients for the resin which leads to different migration rates on an ion exchange column. Chromatography process is classified according to physically state of mobile and stationery phases, whether they are gases, liquid and gases [12]. This are
1)    Frontal analysis,
2)    Elution analysis and
3)    Displacement development [16]
The apparatus used in the column method consist of a glass column fitted with a glass wool plug or a sintered glass disc at the lower end.  An ordinary burette can also be used. The resin used should have small particle size and the diameter of the resin should be less than one tenth of the column. The slurry is slowly poured into the column containing some water. The resin is allowed to settle and then excess water is drained off [1]. 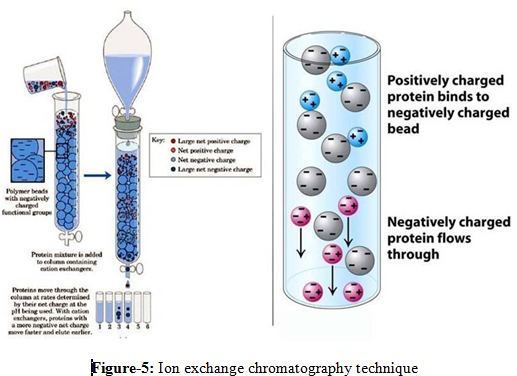